Derrick has a long time association with the Downtown Eastside

Gunargie is a community media & radio producer, and a stalwart advocate for Indigenous voices in media.

Nikida is a mother, grandmother and mentor in her community- She talks about the imapct of her experiences dealing with the VPD and the two officers.

Mari-Louise is a mother, a fighter, a survivor and a resident of the Downtown Eastside.

Don is a community television volunteer and activist who has produced, directed, and played a whole host of production roles over the last 23 years.

PREV Prev NEXT Next

Police violence in the DTES

17 residents and workers in the DTES who experienced police misconduct, violence and harassment in the DTES filed official complaints against two police officers with a pattern of abusive behaviour. Read some of their stories in their own words.

Police wield unparalleled power and authority in our communities. In Vancouver’s Downtown Eastside, this power is predominantly used against poor and racialized communities, people who are in survival economies, and people with little recourse when there is an abuse of power or instance of brutality.

People who shelter outdoors on the street or in tents regularly have their belongings confiscated by the Vancouver Police Department (VPD). Poor, Indigenous and Black people are subject to illegal street stops and harassment. DTES residents report that intimidation and cruelty are mainstays of police presence in the neighbourhood. There are countless stories of people experiencing persistent threats of bodily harm and arrest as an intimidation tactic, physical assault, unreasonable detention and arrest, vulgar name-calling and slurs, and generally humiliating treatment by the VPD.

Throughout 2018, Pivot was repeatedly alerted to a pattern of two specific officers harassing and abusing people living in the DTES. We received these calls from multiple residents as well as service providers. In September 2018, Pivot and the Overdose Prevention Society (OPS) held a community safety rally and invited people to share their stories of interacting with the two identified officers.

In March 2019, 17 complainants were filed with the Office of the Police Complaint Commissioner of BC (OPCC) by Pivot staff.

The OPCC group complaint marks an innovative response to the failures of the existing accountability mechanisms to provide a safe, meaningful avenue for redress for marginalized peoples facing routine police abuse.

Although many more people shared their harrowing stories, they ultimately decided not to join the group complaint because they had no faith in the process, and further feared retaliation and escalating harassment by the individual officers and their fellow officers.

Over the years, Pivot has repeatedly heard that people living in the DTES do not want to file police complaints, because they are complaining abut the same officers who will continue to police them through patrols like the Beat Enforcement Team while their complaints make their way through the system. 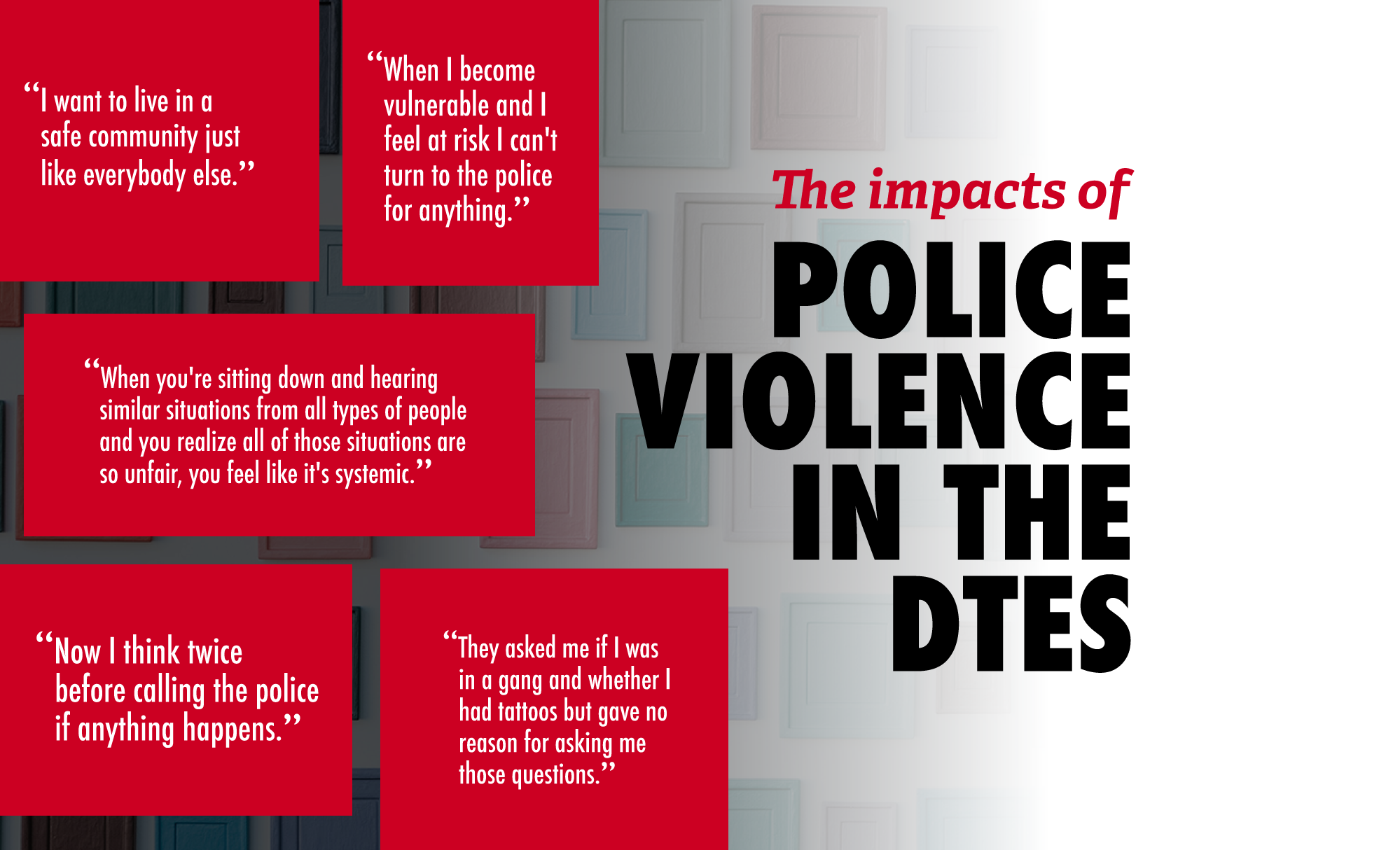 Neither the VPD nor the OPCC currently have policies of removing officers from “beat patrol” pending the outcome of complaints. For potential complainants, this means that the officer who threatened you yesterday exercises discretion when they see you today, and chooses whether or not they want to carry out a street stop on you tomorrow. This can be excruciating while the slow process of the OPCC ticks forward.

Throughout the info-gathering process, many people expressed that they would feel safer filing complaints as part of a group rather than as individuals. Safety in numbers. Counsel on the file decided that pursuing a group complaint would be strategic and serve our clients, although prior to this complaint the OPCC had no process in place. With support from the community and pro-bono counsel, Pivot has been able to utilize a group complaint as an unprecedented advocacy tool in our fight for police accountability. 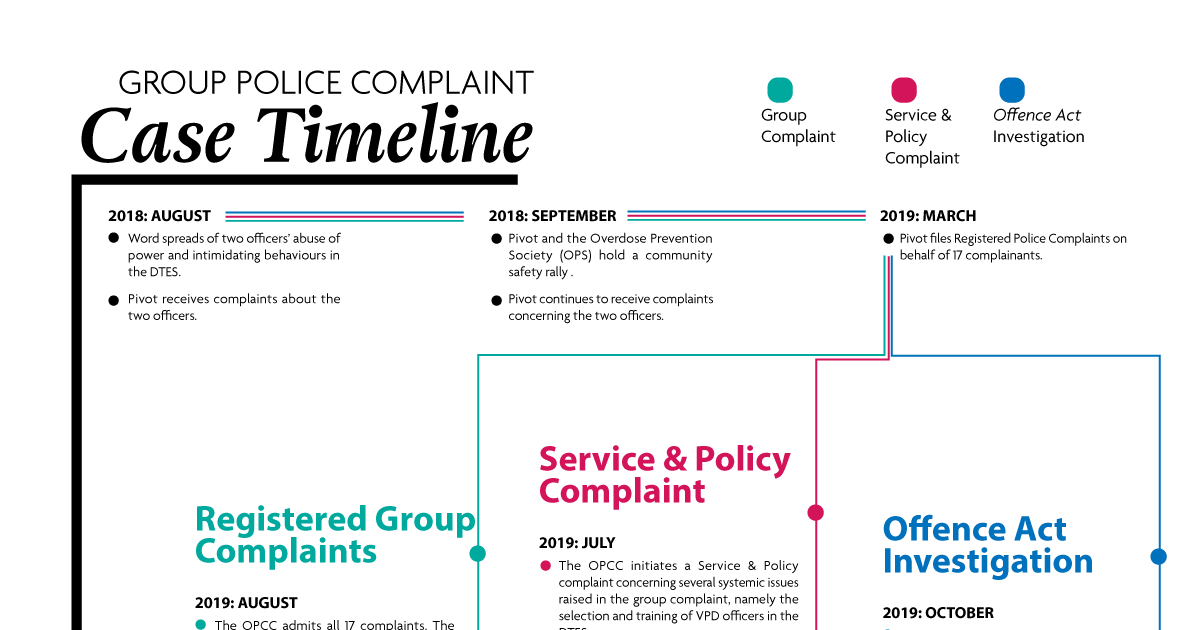 The complainants in this case are sharing their stories of police violence with the hope that you will take the time to read them and sit with their experiences.

We are humbled that they have entrusted Pivot with this complaint and for their patience in this challenging process, made even more difficult by dual public health emergencies. 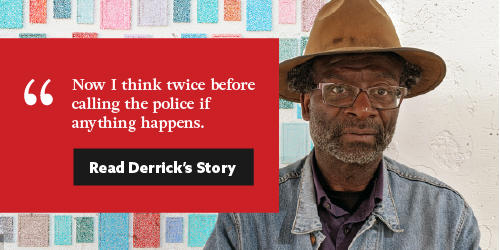 Derrick is a long-time resident of the Downtown Eastside, having lived in the neighbourhood for many years. Read about how his confidence has diminished because of his interactions with these two police officers 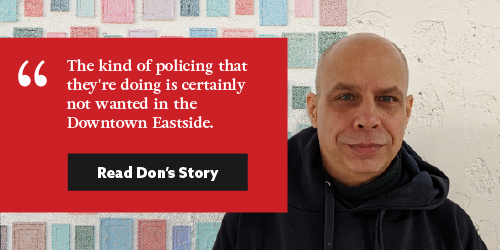 Don is a community television volunteer and activist who has produced, directed, and played in a whole host of productions roles over the last 23 years. Read about Don's experience with police harassment in the DTES. 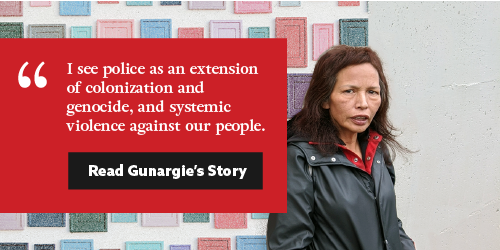 Gunargie is a community media and radio producer, and a stalwart advocate for Indigenous voices in media. Read about Gunargie's experience of police brutality in the Downtown Eastside. 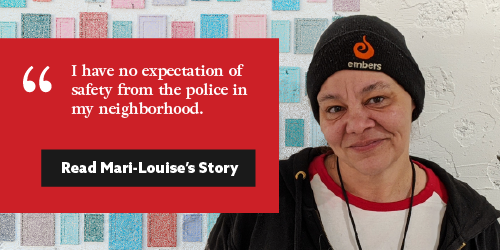 Mari-Louise is a mother, a fighter, a survivor and a resident of the DTES. Read about her experience dealing with police violence and harassment. 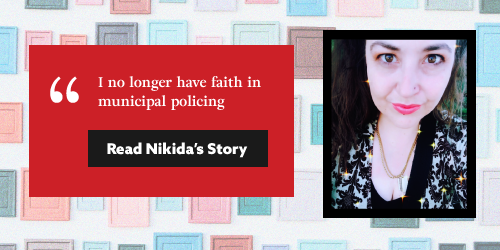 Nikida is a mother, grandmother and mentor in her community- She talks about the impact of her experiences dealing with the VPD and the two officers. 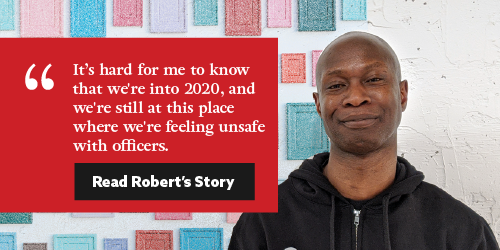 Robert is a housing worker and a program manager with many years of experience in the Downtown Eastside. They recount instances of police misconduct in the course of doing their job. 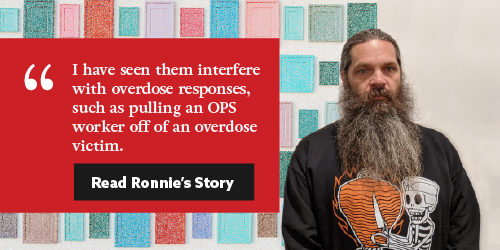 Ronnie is a longtime frontline harm reduction worker and resident in the DTES. Here's his story of the police misconduct and harassment he has witnessed in the neighbourhood.

For the last 20 years, police accountability has remained a core organizational mandate of Pivot Legal Society. Over the years, Pivot has engaged in public education by creating and distributing Know Your Rights materials, making recommendations for legislation and policy to decision-makers. Advocating for changes to policing that would enhance accountability and transparency, and building test cases to challenge police misconduct through the OPCC, civil claims, and coroner’s inquests.

Pivot is invested in working towards safe communities by defunding and diminishing police power. In the meantime, we continue to respond to urgent community concerns such as in this case around these two particular officers. We recognize that advocating for reform involves a complaint and justice systems that are inherently unaccountable, and provide deeply inadequate redress for survivors. Despite these shortfalls, the current complaint system remains the main avenue to hold police accountable.

This group complaint process would not be possible without the people who came forward in this case and stand up everyday in pursuit of a safe and just world for us all.

Thanks to the the many volunteers and organizations who have assisted Pivot throughout this process.

Special thanks to Naomi Moses, Associate at JFK Law and Tara Taylor, who serves as a Community Partner and supports the group complainants with client and legal support.