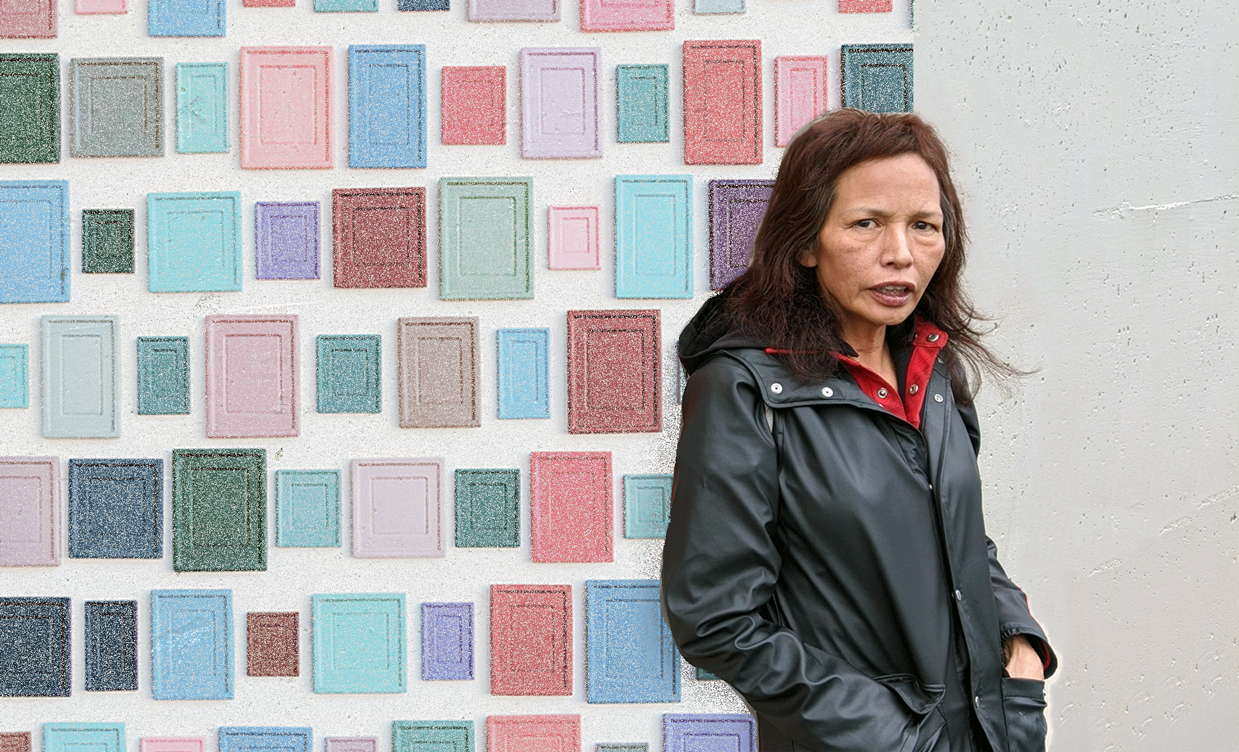 Gunargie is a community and campus radio producer with over 30 years of experience. She is a stalwart advocate for Indigenous voices in media and has founded and produced multiple radio shows.

Gunargie is a member of the Tlowitsis tribe. She is both a direct and intergenerational survivor of Indian Residential Schools. She is the queen of live stream in the Downtown Eastside.

I joined this complaint because I have witnessed a lot of First Nations women who have not been served or protected by the VPD in the Downtown Eastside. I have witnessed a lot of unjust searching through bags. People who have lost their belongings to police harassment and who feel like they're being stopped and that they're not safe. I want to live in a safe community just like everybody else. And just because we live in the Downtown Eastside doesn't give the police an excuse to geographically and racially profile us and treat us like dirt just because we're living in poverty.

I want to live in a safe community just like everybody else.

I was walking down the street one evening right in front of the Regent and I find the two officers who were in a poster that was posted everywhere. I pulled out my camera and I asked him for an interview - and they asked "about what?" and I said, "aren't you the two police officers that are on that poster?" And they said, "aren't you the one that's on the poster?" And I go, "what poster are you talking about?" And they said, "you know the one." I said "the missing and murdered women posters?" And they nodded their head and said "yes." And I said, "I can't believe that you just said that to me." You know, that's like uttering threats and street level wise to say stuff like that is unacceptable. So that was my first experience with them.

When I become vulnerable and I feel at risk that I can't turn to the police for anything.

I have endured so much violence from the police. And I feel like it's related to this complaint because it has escalated since I became a part of this group complaint against these two officers. And as long as I keep my guard up and my defence up, I'll be okay. Right? And it's when I become vulnerable and I feel at risk that I can't turn to the police for anything. I've experienced street violence. I have experienced violence at Oppenheimer Park. And the police have totally looked the other way. I've got a video where a woman is stealing my phone, throwing it across the street, there are a number of officers standing at the park, and this happened a week after I filmed those two officers, after they told me that there is nothing they can do to protect me if anybody wants to beat me up. She kept jumping into my camera, threatening that she was going to beat me and maim me. Maim me! And the police are all there. They could hear it and they laughed. And next thing you know, she points down at my bike and says "is that your bike." And I said, "Yeah. What are you gonna do about it?" And she jumps off the bench, takes my bike and parades it around the park, steals it from me. And the police did nothing. They perpetuated this violence. The body language, the complete disregard for my life and my safety was unbelievable.

I've never made a police complaint before. Taking it to a level hopefully that might change policies and procedures. I think it's been an interesting process. But I think it's put a lot of the 17 complainants at risk on many levels: emotionally, physically, mentally and spiritually. But I think it scares them more than it scares us. It feels empowering in some sense. Having a group together, but it's almost like we're all at risk in different ways now. I think that speaks volumes about how the system continues to fail us, when the police duty is to serve and protect and they're doing everything but that. Even within this process.

I'm a big believer in coverage and building awareness and momentum through media, and I think that that we need to be more public. Because the camera changes everything. It can change conduct and procedure. All right before your eyes. It can also protect us, because now we've gone public. And so anything thereafter that happens to us becomes public. Whether it's continued police harassment or escalated violence upon our people, then everybody will know. I think we need to embrace social media. But surely once this goes through, the police will be doing everything they can to discredit us. You know, we have to protect ourselves.

They need to focus on serving and protecting the people. When people call in about an incident that they get thorough statements, they don't get to play God here and decide whether or not to take a fucking statement. It's procedure, follow their own procedures first of all. And when people come out in your defence, if you're the one being hauled away, they don't get to sit there and tell that person to shut up and go inside or you'll be taken in too. That's not procedure. And that's the kind of shit that they've been pulling.

I’d like to tell them that harassing and stalking, and bullying women who are already at risk is unacceptable. Period.

If I could tell those officers anything, I’d like to tell them that harassing and stalking, and bullying women who are already at risk is unacceptable. Period.

The only way forward for me is taking legal steps and protecting myself and the community and my daughters from violence. I don't want to see them going through this shit. I’m an inter-generational survivor of violence, my family, grandparents, aunties, uncles. My mom went through this. My mother died at the Balmoral. 1972. I believe she was killed. There was an investigation, but nothing came out of it, per usual. I know so many people who have experience police neglect. They don’t protect us, they put us at risk. I see police as an extension of colonization and genocide, and systemic violence against our people.

I see police as an extension of colonization and genocide, and systemic violence against our people.

I'll tell you why I'm doing this: the incidents I have been through with even just these two officers alone was very traumatizing for me. And I know that there are other women out there who are younger than me, more traumatized than me, and have less support than me that are homeless and living with addiction. And things are only going to get worse for them as long as those police officers are stomping on our rights as human beings. These people will die and they're dying before my eyes. And if I had not experienced police violence myself, I would have kept walking by it and not thinking twice about it, because I'd be unaffected by it. And I feel that the whole reason this is happening is because I am meant to expose it for what it is, to stand up to it and not allow it to continue in my community anymore.

I'm not going to be the one leaving here. Just because it's been gentrified, doesn't mean the escalation of violence against women and men has to increase, just because they don't want our sorry asses here anymore. Forget it. My mom lived in the Downtown Eastside in the Balmoral Hotel. My cousins, my uncles, my aunties are still living there. And they want to clean it up and move us out? No, you're going to clean it up and we're going to live the way we should have been living all of these years – with dignity and affordable housing.