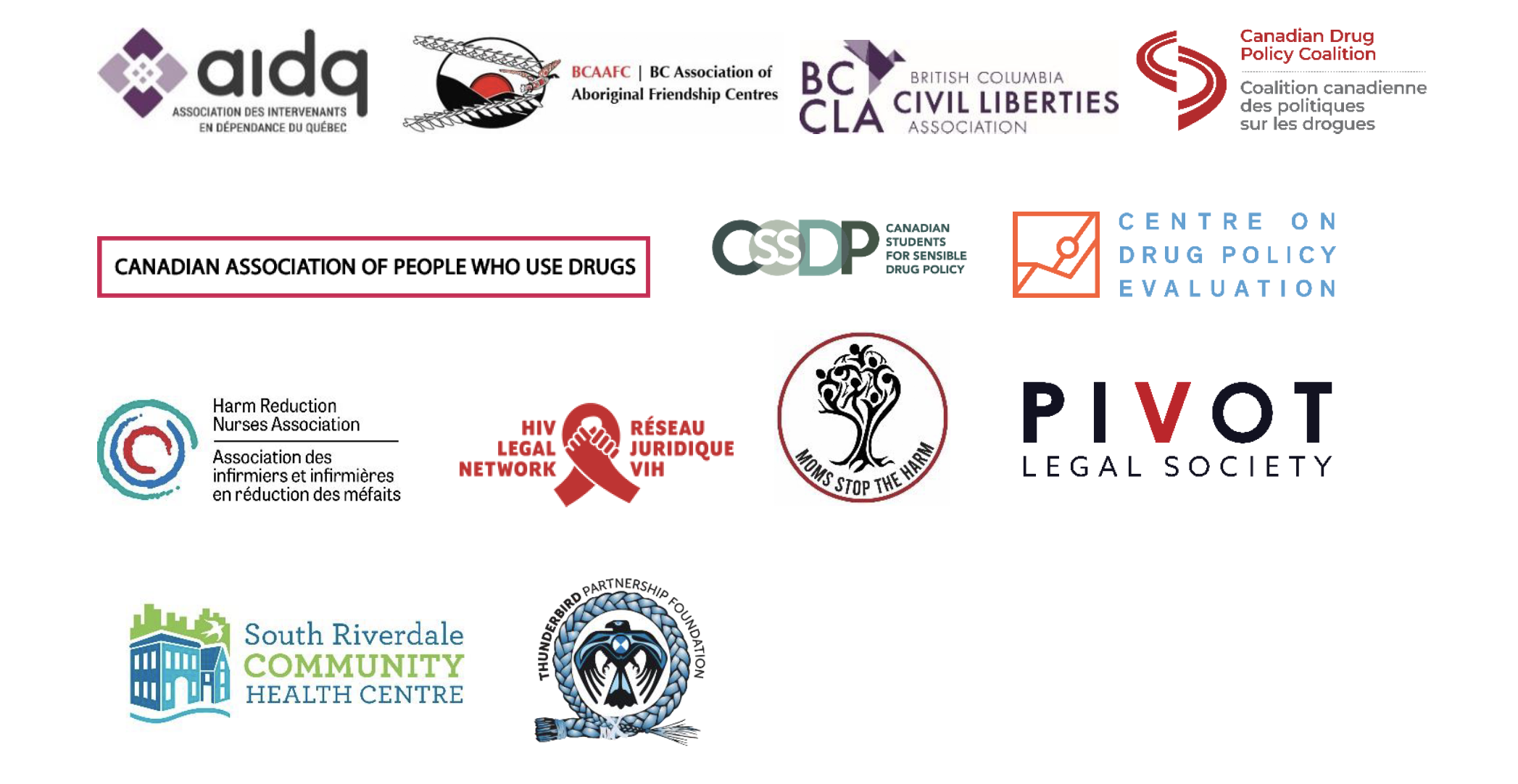 National coalition comprised of people who use drugs and drug policy, human rights, and community organizations decry serious flaws in “Vancouver Model” and call for change

A system designed ‘by’ police is ‘for’ police, not the people it was intended to help.

Vancouver, BC, Coast Salish Territories – A broad-based Canada-wide coalition of human rights, drug policy, community, and drug user organizations are raising serious concerns about a proposed model for drug decriminalization that will be submitted to the federal government for approval. If adopted, the flawed “Vancouver Model,” as proposed by the City of Vancouver, could be a precedent-setting policy change—the first of its kind in Canada—that could pave the way for other cities to follow suit, including communities in Ontario, Alberta, and Quebec among others. It is therefore critical that this initial model gets decriminalization right by centering the health and rights of people who use drugs, as well as the needs of their loved ones and communities.

“The mayor personally guaranteed to involve people who use drugs all the way along. But instead, the city met with police behind closed doors and cooked up a restrictive regime. They locked us out and never told us the details until it was a fait accompli,” says Garth Mullins, with the Vancouver Area Network of Drug Users.

“If I was still using as much heroin as I used to, the mayor's 'Vancouver Model' would re-criminalize me, not set me free. But it’s not too late to fix this.”

Committed to the health and human rights of people who use drugs and progressive, evidence-based drug policy reforms, the coalition is calling on the federal government to address three critical flaws inherent to the current Vancouver Model. These flaws are outlined in a public statement, Decriminalization Done Right: A Human Rights and Public Health Vision for Drug Policy Reform, released today, and are:

1. Lack of meaningful engagement of people who use drugs in designing a system that was meant for them. People who use drugs have not been meaningfully consulted, and this has resulted in a proposal that does not reflect the current realities of drug use. This will ultimately diminish the success of the proposed plan to decriminalize personal possession of drugs in Vancouver. A system co-developed by those at the centre of the issue is far more likely to succeed. The coalition is calling on the Government of Canada and City of Vancouver to engage people who use drugs in a substantive and meaningful way.

2. Drug threshold amounts for decriminalized possession are too low. Health Canada has asked the City of Vancouver to propose threshold amounts for each drug that a person may legally possess. Threshold quantities—depending on how they are set—can provide clarity and advance the health and human rights of people who use drugs. However, if set too low, these thresholds can render a proposal for decriminalization largely meaningless and lead to harm. The thresholds proposed by Vancouver are far too low, failing to reflect the realities of current patterns of drug use. Based on three studies, which Vancouver admits are dated, the proposed thresholds overlook that many people’s drug tolerance and purchasing patterns have dramatically increased and that the drug market itself has changed because of COVID-19. Consultations with people who use drugs only occurred after thresholds were submitted to Health Canada. The coalition is calling on Health Canada and or the City of Vancouver to amend the proposed thresholds to more realistic levels after meaningful consultation with people who use drugs.

“The inclusion and impact of unrealistic thresholds will partially negate the intent of a decriminalization law, and will keep people in the shadows,” says Leslie McBain, co-founder of Moms Stop the Harm. “The criminalization of people who use drugs and the stigma that comes with it has long-lasting negative consequences for individuals, including fear within their families and friends. Criminalization causes instability and fear for people who use drugs who often, as a consequence, use illicit drugs alone and die alone.”

3. Police are dictating the parameters of decriminalization. From the beginning, the Vancouver Police Department (VPD) has been involved in the design of this proposal. This is extremely concerning because “de”-criminalization is meant to remove police involvement from a policy intervention, not give them a greater role by allowing them considerable input in its design. As the City of Vancouver has stated, the current model is meant to be a public-health focused, evidence-based policy. Given the extent to which police actions have historically worked at cross-purposes with health and harm reduction efforts, we have significant concerns about the extensive role of the VPD in this process. There is no legal or other basis requiring police to have the input. We call on the City of Vancouver to remove police influence from the process and the form of decriminalization being proposed to Health Canada.

“We call for an approach to drugs based on best practices, including the full participation of people affected by drug criminalization. Several municipalities in Quebec have taken steps in this direction and some have urged the federal government to decriminalize simple possession and put an end to the harmful reprisals experienced by drug users and their families,” says Sandhia Vadlamudy, Executive Director of L'Association des intervenants en dépendance du Québec.

“Quebec municipalities, including Montreal, must avoid the trap present in the model developed by Vancouver.”

Furthermore, the proposed model does not adequately address the intergenerational harm caused by the over-policing and structural stigma directed at Indigenous and Black communities and people of colour who disproportionately feel the impacts of prohibition. Any proposal—if it is to succeed—must address this reality. #DecrimDoneRight should be based on evidence and good public policy, not police objectives.

Finally, the proposed model does not meet the needs of young people, and explicitly excludes youth under age 19 from the benefits of decriminalization. Instead, the model affirms the discretionary power of police, continuing a worrying trend of maintaining police as the primary resource available to youth, who are stigmatized and targeted for their drug use specifically because of their age.

"There's no good reason to continue criminalizing people for simple drug possession in Canada, but there is plenty of evidence that our current laws cause significant harm. To realize the benefits of decriminalization, the federal Minister of Health must insist that the thresholds reflect real-world use and the input of people who use drugs,” says Sandra Ka Hon Chu, Director of Research and Advocacy for the HIV Legal Network. "Otherwise, we undermine all the objectives of decriminalization."

Download our primer, which outlines why and how provincial and municipal governments should request such an exemption: http://www.hivlegalnetwork.ca/site/decriminalizing-people-who-use-drugs-a-primer-for-municipal-and-provincial-governments/?lang=en

“People who use drugs need support, acceptance, and inclusion. We have to move forward and stop structurally stigmatizing them by our drug laws and policies. They are neither criminals nor sick” (Jean-Sébastien Fallu, Université de Montréal)

“Nurses in British Columbia have been calling for decriminalization for two years. Vancouver had the opportunity to develop a model in partnership with people most impacted by decriminalization and using best practices of consultation, engagement, and transparency. It failed to do so. The proposed model will continue to punish and harm people who use drugs, and maintain barriers to health care. It does not align with a health care approach.” (Marilou Gagnon, Harm Reduction Nurses Association)

“Youth must be involved meaningfully and equitably in the co-development of policies that are going to impact them, which has not happened with the development of the ‘Vancouver Model.’ The institutions currently involved do not speak on behalf of youth and the proposal does not reflect the realities of young people and drug use. Any model that does not include youth is not truly decriminalization.” (Canadian Students for Sensible Drug Policy, Vancouver Chapter)