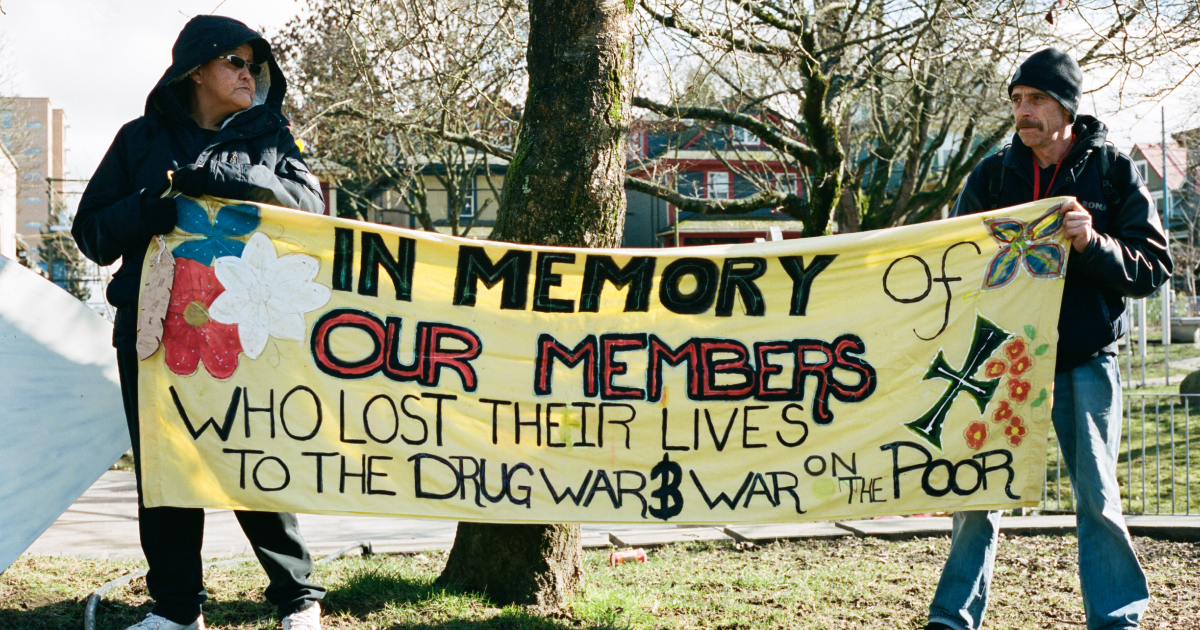 The Vancouver Area Network of Drug Users (VANDU) and Pivot Legal Society support Mayor Stewart’s motion (“the Motion”) to apply for a federal exemption to decriminalize drug possession in Vancouver. Our support, however, is con­­tingent on the motion being passed as is. Principally, we support full decriminalization. We do not support the use of administrative or other regimes to control, coerce, medicalize, pathologize, or penalize drug use.

Decriminalizing drug possession in Vancouver is a bare minimum response to save lives amid ongoing housing and overdose crises and COVID-19. We are pleased the City is considering this important policy. Overdose rates have skyrocketed during the pandemic, largely due to drug prohibition, which creates stigma against drug use, criminalizes and incarcerates people who use drugs (especially those who are poor or racialized), fuels a toxic drug supply, and impedes access to health and harm reduction services.

No Penalties, No Sanctions: Full Decriminalization is Needed to Save Lives

We oppose all amendments that would introduce administrative or other consequences for drug possession, including Portugal-style “dissuasion commissions”, diversion programming, or police interactions of any kind. These approaches to drug possession do not help us. Instead, they preserve the same fear and distrust that drives drug use underground, negatively impacting our lives in much the same ways as criminalization itself.[2] We have been clear – and Courts have affirmed – that a legacy of racist, anti-poor policing means that even a seemingly ‘benign’ interaction with a police officer is often experienced as a hostile detention by communities that have been over-policed, profiled, and incarcerated.[3]

To achieve the benefits of decriminalization, the City of Vancouver and the Vancouver Police Department must provide certainty to people who use drugs that they will not face penal, administrative, or other consequences for possessing drugs for personal use—however ‘well-intentioned’ these initiatives claim to be. Only then can we feel comfortable travelling to and accessing health and harm reduction services and using key safety strategies (such as “buddy systems”) that are currently hindered due to fear of police engagement. We want law enforcement to do one thing and one thing only: stand down.

Full decriminalization will stop the cops from having unchecked power to come after and control us folks in the Downtown Eastside.

Kevin Yake, who serves as the Vice President and Board Member at VANDU says: “In Oregon where they’ve only partially decriminalized, getting caught with drugs means you can choose between a paying fine of $100 or [doing a “health assessment”]. I’m totally against this. Most people will opt for the fine, even if they’ll have a hard time paying it. Speaking from experience, having a judge, a cop, a commission, whoever, make you go to a rehab centre, nine times out of ten it won’t work. Full decriminalization will stop the cops from having unchecked power to come after and control us folks in the Downtown Eastside. We need the police to be reined in.”

Necessary supports including safe supply, affordable housing, healthcare, harm reduction services, and culturally-safe programming can and should be scaled up—but they must be made accessible without the counter-productive and illegitimate involvement of police, bylaw officers, and courts as conduits or gatekeepers.

Learning from Other Jurisdictions: Pitfalls of The Portugal Model

The successes and failures of the Portugal Model offer a critical learning opportunity for the City of Vancouver as it considers decriminalization. The answer is clear: we need a full, rather than partial, solution.

After Portugal removed criminal sanctions for consuming, acquiring, and possessing small amounts of drugs for personal use in 2001, there were demonstrable improvements to the health and wellbeing of people who use drugs, including declining rates of HIV incidence, morbidity, and mortality.  Overall drug use did not increase.

Despite positive outcomes associated with the legal regime in Portugal, accounts from people who use drugs in Portugal reveal the shortcomings and unintended harms of partial decriminalization.

Despite positive outcomes associated with the legal regime in Portugal, accounts from people who use drugs in Portugal reveal the shortcomings and unintended harms of partial decriminalization. Drug users report experiencing many of the same practical harms as they did under prohibition, in part because the goal of dissuading drug use remains the same, and largely because this goal is achieved through punitive, hyper-medicalized, and oftentimes non-consensual tactics (such as fines, medicalized interventions, and compulsory dissuasion):

Those found to be in possession of drugs are sent to dissuasion committees, and must attend medicalised dissuasion appointments to encourage a cessation of drug use or accept a fine (and it bears repeating that people who use drugs are still punished for their drug use when found to be in possession of amounts over the decriminalised threshold). That people who use drugs continue to be mandated to attend involuntary rehabilitation, even under a model of decriminalisation, continues to undermine their agency and self- determination.

[T]he most marginalised drug users in Portugal are still, for all intents and purposes, experiencing forms of criminalisation and police control. They are most likely to be stopped and searched, and although they are less able to afford more drugs, their drugs are confiscated and destroyed by the police. As with other wars on people who use drugs, the Portuguese model seemingly acts as a route through which to police, harass, and disrupt the lives of the most marginalised communities of people who use drugs.[5]

We share the concerns of people who use drugs in Portugal and urge the City to use these firsthand accounts to implement drug policy that reflects real feedback from the communities most impacted by prohibition and partial decriminalization. Vancouver has an opportunity now to address not only the harms of prohibition, but also the systemic racism embedded within drug law enforcement and police interactions.

By only partially decriminalizing we’re going to end up with the same problems: people staying poor and over-policed.

Jon Braithwaite, VANDU Board Member and Secretary, reiterates that by only partially decriminalizing we’re going to end up with the same problems: people staying poor and over-policed. If you’re going to give out fines for possession for instance—we wouldn’t be able to pay these fines. Imagine: you get caught, can’t pay. Two, three years down the line this thing is still going to be following you. You get stuck in the system. We need full decriminalization.

It is imperative that Vancouver’s approach to simple possession upholds our dignity and human rights, rather than reproduce a carceral logic and coercive models of care. This means full decriminalization—no penalties, no sanctions.

See also: R v Boudreault, 2018 SCC 58, in which the Supreme Court of Canada found that the mandatory victim fine surcharge—an administrative fine (typically $100) imposed on any person convicted of an offence—was unconstitutional and amounted to “cruel and unusual punishment”: “[T]he surcharge causes four interrelated harms to persons like the offenders. First, it causes them to suffer deeply disproportionate financial consequences, regardless of their moral culpability. Second, it causes them to live with the threat of incarceration in two separate and compounding ways — detention before committal hearings and imprisonment if found in default. Third, the offenders may find themselves targeted by collections efforts endorsed by their province of residence. Fourth, the surcharge creates a de facto indefinite sentence for some of the offenders, because there is no foreseeable chance that they will ever be able to pay it. This ritual of repeated committal hearings, which will continue indefinitely, operates less like debt collection and more like public shaming.”