It's time to stop punishing people who use drugs

Three simple words that sum up so much of what is wrong with drug policy across the globe in 2013 and what we are fighting for at Pivot with our Health and Drug Policy Campaign.  Today, June 26th, marks the global day of action by supportdontpunish.org to raise awareness to the harms being caused by the criminalization of people who use drugs across the world and advocate for evidence-based harm reduction. We've added our voice to the group of NGOs around the world who support the call for evidence-based interventions that are effective at halting or reversing the HIV/AIDS epidemic among people who inject drugs and removing the political, legislative and ideological barriers that are in place to deny people who use drugs access to health care and human rights.

While organizations today take up the call for human rights compliant programs to address the harms associated with drug use in countries as wide-ranging as China, India, Indonesia, Kenya and Malaysia, we are reminded that Canada is staking a claim on the wrong side of this argument and of history.  Over the last year, Canada has moved away from its international human rights obligations, away from the recommendations of international agencies supporting public health such as WHO, UNAIDS and UNODC, and has chartered a path towards increased criminalization of people who use drugs and reduced access to harm reduction strategies.  These policies will harm the most marginalized members of our community and have large economic and social costs.

March of this year marked the one year anniversary of the Conservative Government's sweeping legislation that enacted the first-ever mandatory minimum sentences for drug offences.  The Safe Streets and Communities Act (SSCA), alternately known as Bill C-10 and the “Omnibus Crime Bill” was passed by Parliament on March 12, 2012.   When the SSCA was debated in Parliament, Canadians were told that many provisions of the Act, including the introduction of mandatory minimum sentences for a number of drug offences, would target “serious organized drug crime” rather than people struggling with drug dependence. Many well-respected commentators, including the Canadian Bar Association, the Canadian Centre for Policy Alternatives, and the Assembly of First Nations have argued, however, that these amendments will affect a spectrum of drug offenders, including people involved in the sale and/or production of illicit substances as a result of their struggle with drug dependence.

Pivot recently released our report, "Throwing Away the Keys: the human and social cost of mandatory minimum sentences" that looked at the impacts of these new sentences on marginalized people who use drugs.  We concluded that these new laws would have a disproportionate impact on marginalized drug users, would likely violate their Charter rights, and have little or no effect whatsoever on crime rates or the number of people using drugs.  We issued a "call to arms" to the legal profession to stand up against this legislation and challenge it in the courts. 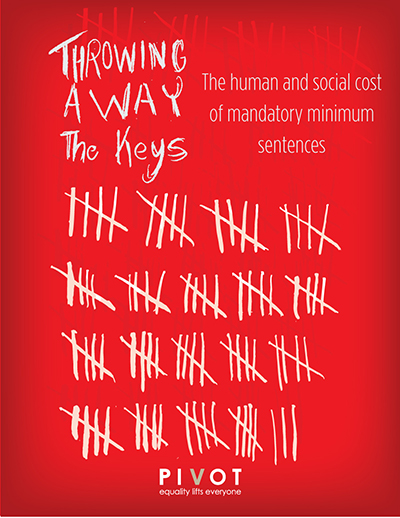 While Canada takes a turn towards increased criminalization of people who use drugs, other nations - most notably the United States - are rethinking their approach to drug use.  Faced with a per capita imprisonment rate higher than anywhere else in the world and prisons filled with half a million people serving long sentences for small-time drug offences, several US states have begun a process of drug law reform aimed at reducing our reliance on incarceration to address drug offences.  Last fall, while Canada geared up to issue harsh mandatory sentences to people who are dependent on drugs and get caught in the cycle of criminal justice, Colorado and Washington made cannabis - a drug used by Canadian teens at a higher rate than anywhere else in the developed world - legal for recreational use.

The discussion cannot stop at the point where we acknowledge that criminalization of drug use is a harm to individuals and society in and of itself.  Something more is needed.  We need to work to ensure that people who use drugs are not denied access to proven health care, and not denied their human rights.  International bodies have recognized that there is a human right to health care.  This right includes receiving health care on an equitable basis and not being denied care because of stigma or discrimination.  These rights are guaranteed in a number of international agreements, including Article 25 of the Universal Declaration of Human Rights and Article 12 of the International Covenant on Economic, Social and Cultural Rights. Commonplace, low-cost interventions, such as providing sterile needles or opioid substitution treatment, are recognized to be basic health care actions that stem the spread of deadly diseases such as HIV and Hepatitis C.  Other interventions, such as supervised consumption for drug users and prescription heroin, are proven to reduce overdose death, stabilize people who use drugs, and lead to markedly greater uptake of treatment services.

When governments seek - through legislation or policy - to block access to health care for people who use drugs based on their moral dislike of drug use and people who use drugs - they are discriminating, violating human rights, and violating the Canadian Charter.  One month ago, Pivot brought a lawsuit and human rights complaint on behalf of our clients seeking to overturn Abbotsford's anti-harm reduction zoning bylaw.  We are arguing that this bylaw is outside of the jurisdiction of the municipality, and violates protections guaranteed under the Charter. Abbotsford's bylaw, along with others in British Columbia, stand in the way of people who use drugs from accessing health care that can save their lives and improve public health and safety.

Early this month, the federal government joined suit by introducing Bill C-65, the "Respect for Communities Act."  This legislation, which introduces over twenty new restrictions for organizations seeking to establish supervised consumption services in their cities, makes it all but impossible for people who use drugs to access these life-saving services.  This legislation, which outlined how groups must seek community input before applying for permission to set up a consumption site, was introduced at the same time the Conservative Party issued an email to its members fomenting community opposition around supervised consumption services.  The email, grounded in the basest of NIMBY scare tactics, illustrated why it is so important to leave health care decisions in the hands of the doctors and not community opinion.

Support.  Don't punish.  It's a simple concept that means we, as a society, need to recognize that drug dependency is a health issue and not a criminal justice matter.  We need to break down the barriers standing between people who use drugs and harm reduction services that promote public health.  Won't you join in the support for evidence-based interventions that save lives?