For five days during the City of Vancouver’s annual “Homelessness Action Week” (Oct. 10–17), members of the Vancouver Area Network of Drug Users (VANDU) and the Coalition of Peers Dismantling the Drug War (CPPDW), residents of the DTES neighborhood, advocates, and researchers documented street sweeps and their impact on people’s lives through observation, tracking, and conducting interviews.

The results are devastating and illustrate the cyclical displacement destroying the fabric of a community.

Each morning this team went out to observe VPD and CUPE 1004 city workers disrupting the lives of people who rely on public space by disposing of personal property, trashing protective rain gear, and issuing inconsistent threats and directives. The results are devastating and illustrate the cyclical displacement destroying the fabric of a community. Over five days, the counter-sweep team spoke with nearly 100 people living within a 2-block radius of Main and Hastings, and documented the impact of this city-police partnership. 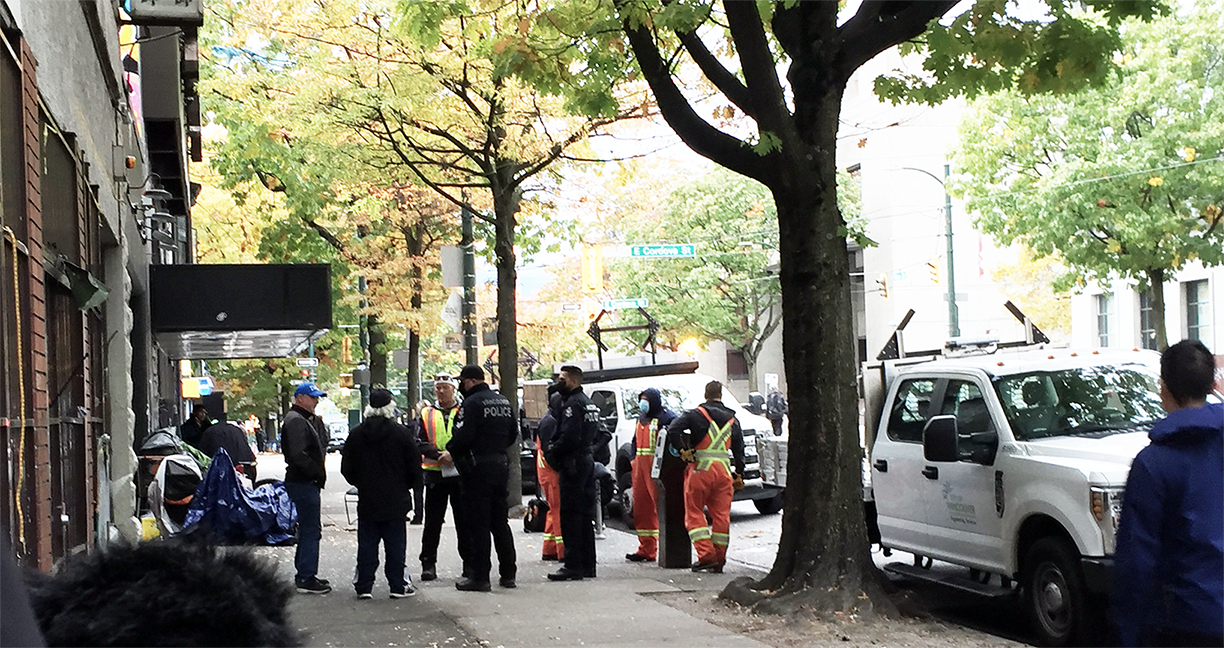 They know people don’t know their rights. We get profiled: city workers and police think they can just roll up because we’re on the street.”

Jacob, one of the survey respondents quoted in the headline, details the daily cruelty: “They literally just start taking anything on the ground. They just scoop it up, put it in the garbage. If you don’t clean it up, they grab it and throw it in the truck. They know people don’t know their rights. We get profiled: they [city workers and police] think they can just roll up because we’re on the street.” 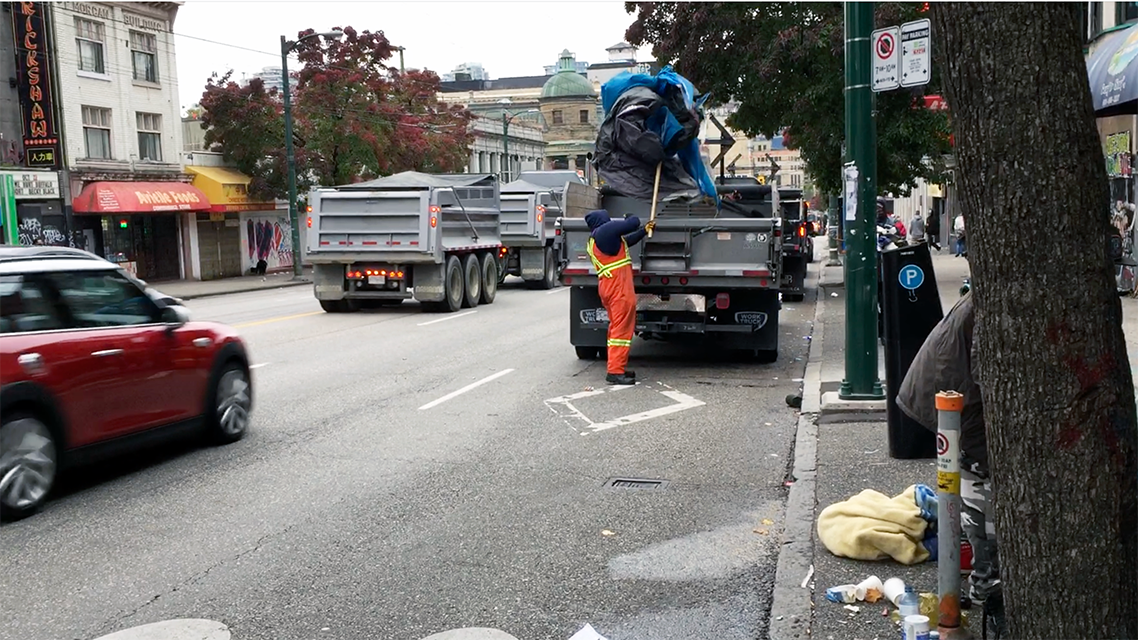 BeeLee Lee, Vice President of the Coalition of Peers Dismantling the Drug War describes street sweeps as cruel and inhumane: “Every morning people can witness the VPD callously stealing people’s possessions and throwing them away as if these possessions are garbage. They have been seen ripping tents away from people that are still inside them and tossing them into the city trucks. Poverty is not a crime. Being homeless is not a crime. Wanting to live with the safety of others like those at CRAB Park, is not a crime. It is about time that VPD stop criminalizing the most vulnerable people in our community.”

Street sweeps are an unending displacement to nowhere

Each day, unhoused residents are forced by sweeps to start all over again, stoking constant fear and precarity, mistrust of law enforcement, and a deep sense of hopelessness.

While the City of Vancouver has committed to “decriminalizing poverty,” the ongoing street sweeps reproduce and punish homelessness and poverty. Each day, unhoused residents are forced by sweeps to start all over again, stoking constant fear and precarity, mistrust of law enforcement, and a deep sense of hopelessness.

Dr. Alexandra Flynn, Assistant Professor at UBC’s Allard School of Law highlights how street cleanups target people who rely on public space: ”Poor people are often precariously housed, moving between public and private spaces, such as insecure rental housing, rooming houses, shelters, or public space. Poor people's belongings - including much-needed medications, clothing, photos and tents - are subject to the will of many others, including police officers, landlords, or shelter providers, who each have their own rules. The result is that possessions may be confiscated or destroyed, with officials seeing them as ‘garbage' or ‘waste', leading to further difficulty for survival and a denial of human rights.”

For advocates and community leaders, it’s clear that this dehumanizing practice must end immediately: we call for 1) the removal of VPD from the street sweep team, 2) the creation of a community-led street cleaning crew, 3) the repeal of bylaws that criminalize poverty and survival, and 4) the creation of safe, dignified housing for all people experiencing homelessness.

Every morning in Vancouver’s Downtown Eastside unhoused people who shelter outside are told to pack up and move their belongings by several City workers and VPD officers; with nowhere to go and only a few minutes to inventory their property. Street sweeps lead to residents routinely losing invaluable personal possessions: including irreplaceable belongings (family memorabilia, sentimental objects) and survival gear (medication, photo ID, tents, sleeping bags, and clothing). Residents have no recourse when their possessions are confiscated and destroyed, as their belongings are callously pitchforked into the garbage.

VANDU and Pivot are launching a campaign to stop street sweeps in the Downtown Eastside. Visit the campaign website to read forthcoming reports and to join the fight: http://stopthesweepsdtes.ca/

A statement by Coalition of Peers Dismantling the Drug War (CPPD), Vancouver and Area Network of Drug Users (VANDU) marking October 10-16, Homelessness Action Week across BC, including on unceded territories of the xʷməθkʷəy̓əm (Musqueam), səlilwətaɬ (Tsleil-Waututh) and Sḵwx>̱wú7mesh (Squamish) Nations.

A group of residents, advocates, and researchers documented street sweeps for five days by taking pictures, recording video, and interviewing nearly 100 people who experience this practice.

About Coalition of Peers Dismantling the Drug War

The Coalition of Peers Dismantling the Drug War (CPDDW) believes that the current rate of overdose death is solely caused by the ramifications of the regime of prohibition and the ongoing war on the poor Their goal is to change policy and empower people who use drugs, both by filling systemic gaps in healthcare provision, and through long-term systems change. CPDDW seeks to reclaim knowledge that has been stolen from drug users and then used by the Canadian Healthcare System in inadequate and damaging ways.

About Vancouver and Area Network of Drug Users

VANDU is a group of users and former users who work to improve the lives of people who use drugs through user-based peer support and education. VANDU is committed to increasing the capacity of people who use drugs to live healthy, productive lives. VANDU is also committed to ensuring that drug users have a real voice in their community and in the creation of programs and policies designed to serve them.

Criminalization and Policing, Press Releases, Homes For All.