October 10-16 marks Homelessness Action Week across BC, including on unceded territories of the xʷməθkʷəy̓əm (Musqueam), səlilwətaɬ (Tsleil-Waututh) and Sḵwx̱wú7mesh (Squamish) Nations.

This year, annual “Homelessness Action Week” events begin on “Thanksgiving,” a colonial holiday that celebrates the original and ongoing displacement of Indigenous people from their traditional territories.

Indigenous people living on the street, including our Elders, face harassment, emotional and physical abuse.

“The way people are treated is so unfair. They are subject to more harassment, especially if the police know they have nowhere to go. Indigenous people living on the street, including our Elders, face harassment, emotional and physical abuse. I’ve seen this during my time in the Downtown Eastside, and it needs to end now!” - Delilah Gregg, Nak'azdli First Nation, VANDU Board Member

“Canadian governments have banned — or been complicit in maintaining bans on — activities predominantly engaged in by Canada’s poor and vulnerable, empowering the police and the criminal justice system to keep them out of sight and out of mind….[which] have disproportionately affected Indigenous and Black Canadians. - Mohy-Dean Tabbara, “Dismantling vicious cycle of poverty and systemic racism should guide criminal justice reform”

While the City of Vancouver did not undertake its annual Homeless Count in 2021 (citing the COVID-19 pandemic as an excuse), data from the previous year identified over 2,000 people experiencing homelessness in Vancouver, including those on the street and living in sheltered locations with no fixed addresses – emergency shelters, detox centres, safe houses, and hospitals. While there was no official count this year, homeless folks faced continued surveillance and displacement throughout 2021. This includes the displacement of Camp HOPES residents and CRAB Park residents, as well as the continued practices of street sweeps, bylaw enforcement, and the rollout of policing programs such as the Trespass Prevention Program.

“As the weather is getting colder the Vancouver Police Department (VPD) and the City of Vancouver’s Transient Crew will continue their unjust daily street sweeps. We know that Indigenous folks are over-represented in the homeless population. The City claims it wishes to reconcile the effects of hundreds of years of colonization. However, each morning people are able to witness the VPD callously stealing peoples possessions and throwing them away as if these possessions are garbage. What is worse is that they have been seen ripping tents away from people that are still inside them and tossing them into the truck. This Homelessness Action Week I call on the Vancouver Police Department and the City of Vancouver, specifically the Transient Crew, to immediately stop these cruel tactics. I call on the City of Vancouver to fund storage spaces for unhoused individuals to store their precious belongings so they are not at risk of being stolen by the police. Poverty is not a crime. Being homeless is not a crime. Wanting to live with the safety of others (Crab Park) is not a crime. It is about time that VPD stop criminalizing the most vulnerable people in our community. - BeeLee Bee, Vice President, Coalition of Peers Dismantling the Drug War

Alongside public health emergencies and anti-poor public policy, Metro Vancouver earned the title of “eviction capital of Canada” based on research by Xuereb et al. (2021). Evictions continue to displace vulnerable tenants onto the street. Closures of community centres and mandatory vaccine passports have further excluded homeless residents’ access to public and private space in the neighbourhood they call home.

Today, we want to highlight a particularly dehumanizing practice that impacts folks who rely on public space - street sweeps. Every morning in the Downtown Eastside, a team of CUPE 1004 municipal workers and VPD officers patrol Hastings Street to perform ‘street sweeps’. While the City claims this practice is intended to keep clean sidewalks, the Downtown Eastside community knows that the real purpose of the sweeps is to displace homeless residents from the public streets they depend on. The practice of street sweeps is inhumane and discriminatory, with public sector workers regularly targeting homeless residents for harassment and property seizure. Tyee reporter Jen St. Denis has extensively covered the issue, highlighting how “advocates say city workers and police remove personal items during daily street cleaning, and it needs to stop.

The Downtown Eastside community wants safe, clean streets. The City’s daily routine of harassment and displacement has done nothing to keep sidewalks clear. Instead, street sweeps punish residents for relying on public space. Until Vancouver’s homeless residents are given secure and dignified housing, we must stop this pointless cycle of violence. During “Homelessness Action Week,” we’re launching our public demands, and rolling out our campaign to end the City’s continued practice of street sweeps. 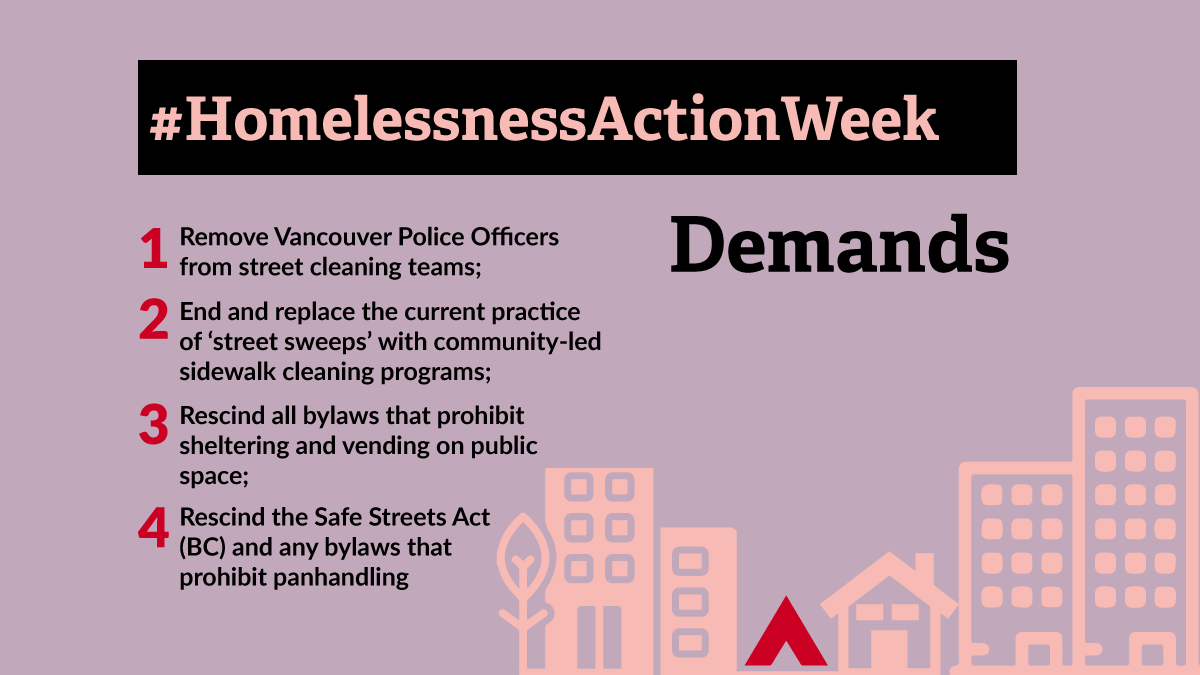 We invite City and CUPE officials to meet with us and begin taking action to realize our demands.

Blog, Homes For All, Letters & Statements.