Vancouver, Coast Salish Territories – This morning, a group of community organizations serving the Vancouver’s Downtown Eastside filed a Service and Policy Complaint with the Vancouver Police Board opposing the creation of a new VPD Neighbourhood Response Unit.

READ the joint complaint to the Vancouver Police Board 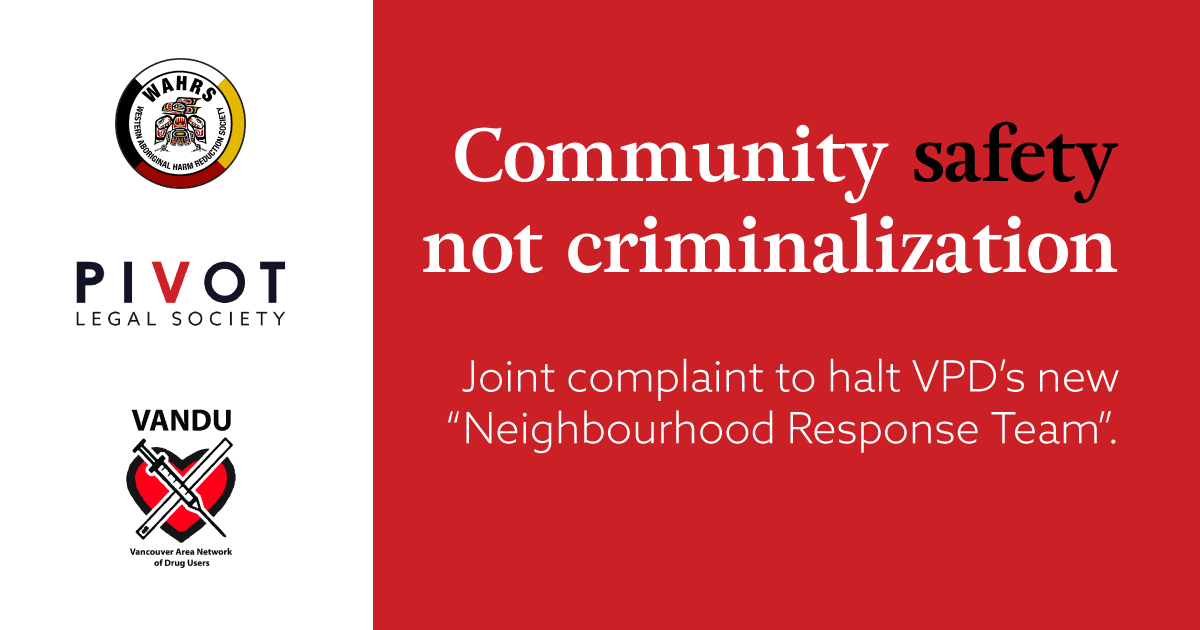 According to the complaint, the creation of the new unit is in direct conflict with Vancouver City Council’s unanimous resolution in July 2020 to “decriminalize poverty and instead support community-led safety initiatives”, as well as a breach in VPD’s own stated mandate as a part of their 2017-2021 Strategic Plan.

Too often the police have a free licence, especially against Aboriginal people, Black people, and in the past few decades people who are homeless and people with addictions.

Flora Munroe, VANDU and WAHRS Board Member deplores this use of public resources, and the impact on marginalized communities:

“The police still harass, bully, and target our communities with violence and scare tactics. Too often the police have a free licence, especially against Aboriginal people, Black people, and in the past few decades people who are homeless and people with addictions. I think now is the time for people in every province to rethink how to best use the police. A lot of the money for policing can be used to support homeless people, and assistance programs for families and people on disability, mental health training, and youth mentorship. We need to stop hiring more members of the Gang in Blue.”

A lot of people don’t even have homes, that means their very existence is illegal because it breaks bylaws and rules.

Delilah Gregg, a member of the VANDU Housing Action Committee calls the new unit a shameful move by the VPD:

“The VPD has no real compassion towards people in the DTES. It is a waste of time and resources to be giving the residents of the DTES tickets for low priority crimes. A lot of people don’t even have homes, that means their very existence is illegal because it breaks bylaws and rules. And people’s lack of access to resources is getting worse with COVID and Vancouver in lockdown. People have nowhere to get themselves well.”

This is an entirely inappropriate action by the VPD, informed by inadequate surveying.

According to Meenakshi Mannoe of Pivot Legal Society:

“This is an entirely inappropriate action by the VPD, informed by inadequate surveying. The new team demonstrates that the police are acting unilaterally when stakeholders, including people with lived experience and the City of Vancouver itself has called for an urgent shift from policing and criminalization, to inclusion and peer-led crisis supports.” She further states that “the complaint is calling for the VPD to halt the deployment of the new unit, and to cease evading their obligation to provide budgetary, policy and practice documents as a part of a City of Vancouver Motion approved unanimously in July 2020.”

The complaint is in response to a Vancouver Police Department announcement on November 9th, 2020 that personnel were redeployed from other duties to the new Neighbourhood Response Team to counter non-criminal “street disorder issues” such as disturbances, suspicious circumstances, people trespassing, and mischief.

The press release cites a survey of 755 people titled “Perceptions of Crime Report” conducted by a marketing research and analytics company called Leger. The survey results can be found here:

The Western Aboriginal Harm Reduction Society is an organization of Indigenous people who are current and former users of illicit drugs and/or illicit alcohol. WHARS members are engaged in activism, research, healing, harm reduction, community-building, and more. We’re passionate about our community and are working to support our members.

VANDU is a grassroots group of users and former users who work to improve the lives of people who use drugs through user-based peer support and education. Since 1998, VANDU has committed to increasing the capacity of people who use drugs to live healthy, productive lives. VANDU is also committed to ensuring that drug users have a real voice in their community and in the creation of programs and policies designed to serve them.