Last Saturday, a woman I’d never met walked right up to me, wrapped her arms around me, and squeezed me into a bear hug. “I love you guys,” she said.

We were standing inside Pivot Legal Society’s office where I was helping to hand out official Hope in Shadows photography contest cameras. The room, which staff had cleared the night before of office desks and chairs now piled high in the tiny “Green Room” meeting space, was crammed full of DTES community members lining up to receive their cameras. Outside, I could hear soft guitar music playing on stage at the block party. But inside, there was a much louder buzz of excitement. 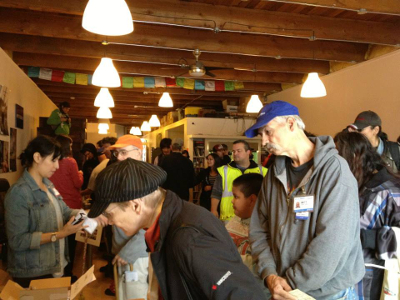 Saturday was the 11th annual launch of the Hope in Shadows photography contest and first ever block party for DTES community members. We’d already handed out a smaller number of cameras at our partner organizations: a Latin American group at Watari, the DTES Women’s Centre, Ray-Cam Co-Operative Centre, and Oppenheimer Park. But Saturday was the big event. And community members didn’t disappoint, with over one hundred and sixty turning up to collect their cameras and enter the three-day photography contest.

In almost any other situation, the hug I received that day would have felt odd. An invasion of my personal space. But that day it felt natural. Since I joined Pivot Legal Society as an intern exactly one month ago today, DTES residents have brought me into the incredible community that surrounds Hope in Shadows.

Over the past month, I’ve been putting up Hope in Shadows posters inside residences, SROs, service organizations, and shelters in the DTES. “Hi, I’m from Pivot Legal Society. Can we put up a poster for Hope in Shadows?” I’d ask, after being buzzed into the building.

I’d watch the face of the person at the front desk change from a tired wariness to a bright, friendly smile: “Oh, it’s that time of the year again, is it? Put it up right over there so everyone will see it.”

Then, more often than not, they’d launch into a conversation about how they knew so-and-so who’d won last year, or how they’d entered every year for the past 10 years and still hadn’t won anything but weren’t about to give up, or how their mother had been featured in the winning photograph a few years back.

It was as if carrying a Hope in Shadows poster let me into a secret club.

If I was let into this secret club it’s one that couldn’t exist without Carolyn Wong, who has coordinated Hope in Shadows for the past five years. It’s under her leadership that the contest has developed into one that is truly community run. Pivot staff and a dedicated team of volunteers may have been putting up posters and handing out cameras, but it’s the community that has made this contest 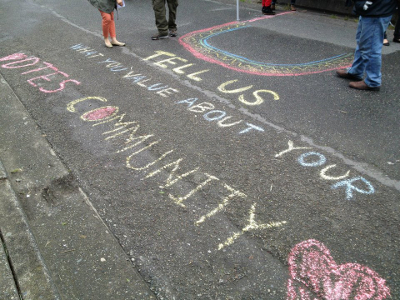 Last Saturday, I heard many photo ideas from contestants: Their daughter in a garden of flowers, symbolizing the growth of the next generation. Fish swimming in a large tank of water, showing the peaceful relaxation they feel in the community. Contestants told me their ideas, and then rushed out into the sunshine eager to start taking photos.

What will they come up with? We don’t know yet. But the theme of the contest is “what I value in my community.” We asked contestants to answer this question in an interactive art activity at the block party. They told us they valued: “random kindness,” “acts of beauty,” “beautiful smiles for a wonderful DTES community,” “my friends,” “getting to laugh,” “anyone who struggles to get by, but still goes out of their way to help another in need.”

I’ve been privileged to experience these values first hand. Soon, so too can the rest of Vancouver, when the 2014 Hope in Shadows calendar is released this fall.

Vendors on the streets of Seattle and Portland