August 31st of every year is International Overdose Awareness Day.

In Canada, far too many people are dying from opioid drug overdose.  Opioid overdose is when a person consumes more drug than his or her body can process. When this occurs, certain essential life functions, such as breathing, are impaired, and the person loses consciousness.  If the quantity of drug in the body is sufficient, heart rate and breathing may decrease to the point of death. Overdose deaths are the leading cause of death among people who use drugs in Canada, and many - if not all - overdose deaths are preventable with relatively simple measures.

Unfortunately, few provinces actively report overdose fatalities, and so it is difficult to put a concrete figure on the rate of overdose death in Canada.

The lack of data around overdose death is disturbing, considering the comprehensive statistics that are available about overdose death from the U.S. Center of Disease Control.  We do know, though, that in Ontario there were 2,330 drug-related deaths between 2006 and 2008, of which 58% were attributed to opioids.  In British Columbia, there were 1,654 fatal overdoses attributed to illicit drugs between 2002 and 2010, and over 2,000 hospitalizations related to illicit drug overdose.  The annual rate for fatal overdoses for people who inject illicit drugs is estimated to be between one and three percent per year.

Statistics around opioid overdose include not only drugs that we typically associate with drug users, such as heroin, but also prescription drugs, which are increasingly seen as the agent of overdose in Canada.  It is now estimated the 50% of annual drug related deaths are related to prescription opioids.  Non-medical use of prescribed opioids is now the fourth most prevalent prevalent form of substance use in Canada, and the International Narcotics Board recently noted that Canada is the largest per capita consumer of prescription opioids.

Overdose death has received media and medical community attention in the last year in BC.  In October 2012, the Interior Health Authority released a warning that opioid overdoses in that region were about twice the rate as the rest of the province.  In May of this year,  the Provincial Health Officer reported that there were 23 deaths related to the potent opioid Fentanyl in the first four months of 2013, compared to only 20 deaths for the entirety of 2012.  Fentanyl is a powerful drug used for pain that can be mistaken for the much-less-potent heroin available on the street.  In July, the Abbotsford RCMP issued a warning that the reports of overdose had increased 39%, resulting in eight overdoses and one death.  Of course, the fact that Abbotsford systematically bans harm reduction services in that city makes the situation all the more grave.

If there was nothing to do to prevent overdose death, we might be complacent about a tragic, yet unavoidable, consequence of drug use.  However, that is not the case.  There are, in fact, several things that we can do to reduce or eliminate overdose death.  Consider first the climate of drug prohibition.  Because many drugs that people seek for a variety of reasons are illegal under prohibition, an industry of organized crime has evolved to provide these drugs to people on the illicit market.  For drugs on the street, there is neither testing, nor quality control nor regulation, ensuring that many products are of varying quality and potency and might be mistaken for something else. A person knowing the strength and potency of the substance that he or she is about to inject is the first step to preventing an overdose.  On the street, where prohibition has left a regulatory vacuum, there is always going to be uncertainty. Ending prohibition, with the accompanying social and human costs for people who use drugs and are caught in the criminal justice system, and replacing it with a regulated system for all drugs would go far towards addressing the harms of drug use, including overdose.

Ending prohibition aside, here are three things that we can do to address overdose deaths in our communities:

1) Remove the barriers to naloxone and offer overdose prevention training

Naloxone is a prescription drug (also known as Narcan) that reverses the effects of opioids such as heroin or OxyContin.  It has been approved in Canada for over 40 years and is on the World Health Organization's list of essential medicine.  Basically, if a person is overdosing, naloxone can be administered by injection or inhalation and the person revives.  The effects of naloxone last for about two hours - sometimes less than the effects of the opioid - and may need to be re-administered.  Naloxone is safe and has no effect if administered to a person who has not consumed opioids.

In Canada, naloxone is available to emergency health professionals, such as paramedics and at hospitals, but this may not be enough.  In order to make this drug the most useful, it should be in the hands of the people who are taking opioids for use on their colleagues. In the U.S. there are over 180 take home naloxone programs operating in communities of drug users.  Several jurisdictions in Canada, including British Columbia, have experimented with peer-distribution programs for naloxone.  Currently, however, there are barriers to having naloxone more widely distributed to peers: the fact that it requires a prescription for distribution, the fact that the cost remains prohibitive to some, and that naloxone is most widely available as an injection formula rather than for inhalation, making it more difficult for lay people to use in a crises.  Removing these barriers and promoting take home naloxone programs will effectively put naloxone in the hands of the people who most need it. 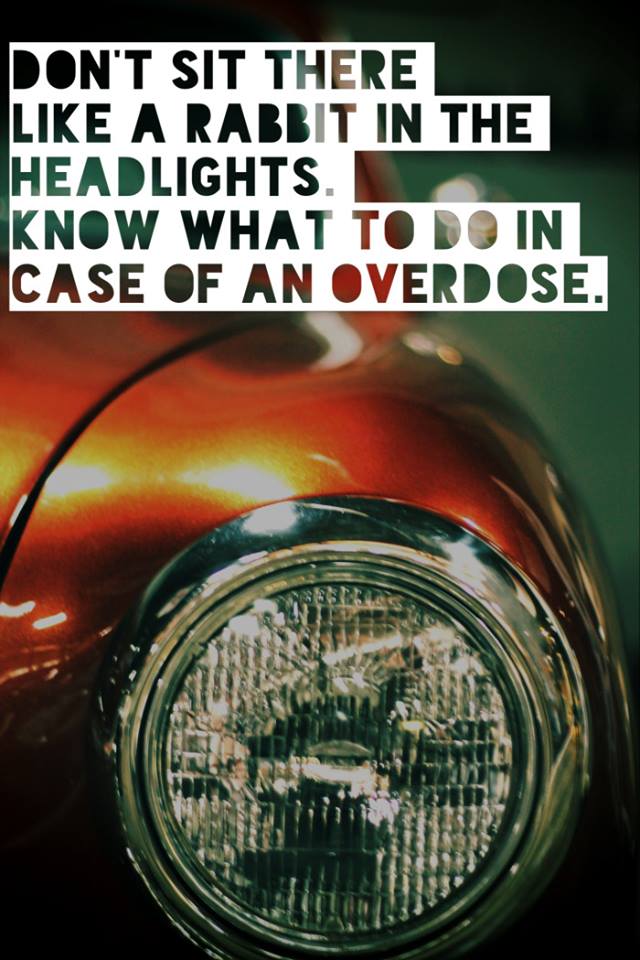 Combining naloxone with widespread overdose prevention training to anyone who is a drug user or who has contact with drug users (or, who has relatives on prescription opioid medication) would ensure that there were many more people in our communities who were capable of intervening in the event of an overdose.

Most overdoses occur in the company of other people.  The more likely it is that someone calls for emergency assistance, the more likely that the person overdosing will survive.  However, because the person in the company of someone overdosing may fear arrest, losing his or her children, or being the subject of judgment from friends and family, often the call for help is not made.  Research suggests that between 10 and 56 percent of people witnessing an overdose actually call for assistance, putting the life of the person overdosing at risk.  We need to remove the barriers to people calling 9-1-1 in the case of overdose.

One solution to this problem is for the federal government to enact 9-1-1 immunity legislation, or a so-called "Good Samaritan Law."  A person calling 9-1-1 to report an overdose would not be subject to criminal arrest for drug possession or drug use.   In the last several years, states such as New York, California and Florida have passed such legislation.  In many states, this legislation was passed with bi-partisan support.  This is a positive step towards saving lives.  It is urgent that we enact this legislation in Canada.  By creating a Good Samaritan law, our government can signal their recognition that accidental drug overdose is a health issue, and that fear of criminal prosecution should not be a barrier to seeking out emergency assistance in the case of an overdose.

Nearly two years ago, on September 30, 2011, the Supreme Court of Canada ruled that it was contrary to the Canadian Charter for the federal Minister of Health to deny an exemption to the criminal law for the clients and staff of Insite, Canada's only sanctioned supervised injection site.  In the two years since this landmark decision, no city in Canada has been in a position to open a sanctioned site, despite high rates of transmission of infectious disease and overdose death, although several cities - including Montreal, Toronto, Edmonton and Ottawa - have expressed their intention to seek federal approval.  In response to the Insite court decision, the conservative federal government tabled a new bill that would virtually make it impossible for approval to be granted for a site.  If enacted, Bill C-65 (the "Respect for Communities Act") will put in place 26 new requirements that proponents will have to meet before becoming eligible for consideration of granting an exemption by the Minister.  This legislation opens the door for NIMBYism and fear mongering to win the debate over the evidence of efficacy of supervised injection.

Insite was borne on the heels of a profound public health crisis in Vancouver in 2003.  People watched their friends, relatives and colleagues succumb to overdose death at an alarming rate.  Insite was envisioned as a life raft in a sea of despair and death, and that is what it has become for this community.  The results of Insite's operation have been as equally profound as the crisis that defined its purpose.  Despite thousands of overdoses at Insite over the years, there have been zero deaths.  Both the courts and the scientific researchers studying Insite and supervised injection sites around the world have determined that injection in front of a nurse unequivocally reduces or eliminates the risk of overdose death.  The other benefits of Insite - increased uptake of addiction treatment, reduction in the spread of HIV and hepatitis C, and safer injection practices - are also important and good reasons why we should be opening the door for new consumption sites and encouraging drug users to use them instead of creating increased barriers based on stigma of injection drug users.

The above three steps will bring us a lot closer to the goal of eliminating overdose deaths.  As citizens concerned about the marginalized people in our communities and public health, we should advocate for these sensible solutions.

Across the world this weekend, communities will be acknowledging International Overdose Awareness Day in a variety of ways.  Some mournfully remember their lost friends and relatives.  Others make political statements asking for change in policies treating drug users as less than equal members of society.  Others take to Facebook and blogs to tell their stories.

Won't you join us in this campaign to save lives?