The Case Against Police Entertainment

The Case Against Police Entertainment

In earlier times when society wanted to ridicule a wrongdoer we would lather them in tar, roll them in feathers and carry them off through the streets. Today, we put them on television.

COPS, an icon of American reality TV, can be seen as the modern day equivalent to putting someone in the stocks—holding them up for the public to ridicule. While COPS was given the plug by the FOX network earlier this year after 25 seasons on the air, Spike TV has decided to continue the tradition. The bread and butter of the program is violent, comical or righteous arrests. In other words, entertaining ones.

Police Entertainment is not an American phenomenon. Vancouver has been host to at least two television programs of a similar nature. Recently, a program called Border Security: Canada’s Front Line filmed the arrest of eight migrant workers on Victoria Drive. The VPD itself oversaw a program which followed officers patrolling the Downtown Eastside called Beat TV. Beat TV filmed individuals suffering from overdoses, victims of assault and numerous arrests for drug-related activity. The show was set in the DTES.

Recently Pivot sent a Freedom of Information request to the VPD asking for details of their show, Beat TV. Some of the results are shocking. In the copy of the agreement between the VPD and the production company, Galafilm, the VPD agrees to give access to “sensitive law enforcement information, recorded or oral information, belonging to the VPD, which Galafilm shall treat as being strictly confidential.” If there was any doubt about who is really in control of this endeavour, the contract even goes so far as to stipulate “Galafilm will not in any way in the Series portray the VPD or any VPD employee in a derisive or derogatory manner, as determined by the VPD”. After Pivot made some inquiries, it turns out the VPD and Galafilm did not ever obtain a license from the City of Vancouver to film Beat TV.

There is little doubt of the potential popularity of police entertainment. COPS was one of Fox's longest running programs and has become a pop culture icon. Police entertainment combines our sense of satisfaction when justice is served with the drama of a chase and the embarrassment of strangers.

There is also little doubt about the damage these programs can do.

Police officers have been entrusted with the power to protect the safety of British Columbians and enforce the law. The police can pull over your car, detain you and order you to do things. If they choose to allow filming when they arrest you, there is little you can do to stop them.

Police entertainment is exploitative. TV shows aren't made for free. Somewhere along the line those responsible benefit, whether from profit or publicity, from filming citizens at their lowest moments. The suffering and humiliation of the subject is necessary for the profit of the TV show. The most shocking television tends to bring greater viewership. This creates an incentive for the crew to film citizens in their most desperate and vulnerable states. 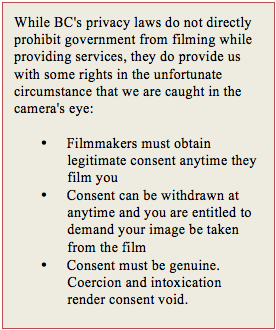 Since members of minority groups and the impoverished are more likely to be arrested or involved in police actions, the brunt of the burden falls on the already disadvantaged. Stereotypes are reinforced. Vulnerable groups are further isolated.

In our opinion, police entertainment programs constitute gross breaches of the privacy of British Columbians. Citizens are filmed at their most vulnerable, confused and powerless. The experience is humiliating. Private cameras with the privilege of police power can enter your home. The footage, altered or not, can be plastered across the television and the internet as a perpetual reminder. Many people featured are never charged much less convicted. Bystanders, victims and witnesses are all in danger of being caught in the camera's eye.

Not surprisingly Beat TV was very unpopular with many residents of the DTES and the community groups that assist and represent them. It also appears to have been relatively unpopular with viewers as well, failing to compete with the fictional police and crime dramas that populate the networks every night. After numerous complaints and consultations the VPD decided to shelf the program, and has pledged that it will not return. Perhaps, that reality is better for everyone.

Danny Urquhart is a volunteer intern for Pivot this summer and will be returning to the University of Toronto in the fall for his 2nd year of Law School.