For five years Norm has sheltered on Abbotsford’s Gladys Avenue. For five years the City has done nothing to help him find housing.

Instead, for those five years Norm’s been caught up in the Abbotsford Shuffle.

The Abbotsford Shuffle is shorthand for the displacement people experiencing homelessness in Abbotsford have lived for years. Evictions, harassment, possessions taken, being told to move out and move along.

And yet, despite the Chief Justice’s ruling at the Supreme Court of BC last October that found displacing people violates their rights and causes countless harms, there appears to be no end in sight to the Abbotsford Shuffle.

Last week the City posted eviction notices at the Gladys Avenue homeless camp, where Norm has lived for more than two years. Before setting up shelter there, he was further up the road across from the Salvation Army. Along with dozens of others, he was evicted. He has been evicted and harmed in so many ways over the years. The city spread chicken manure on his camp before evicting him in 2013. 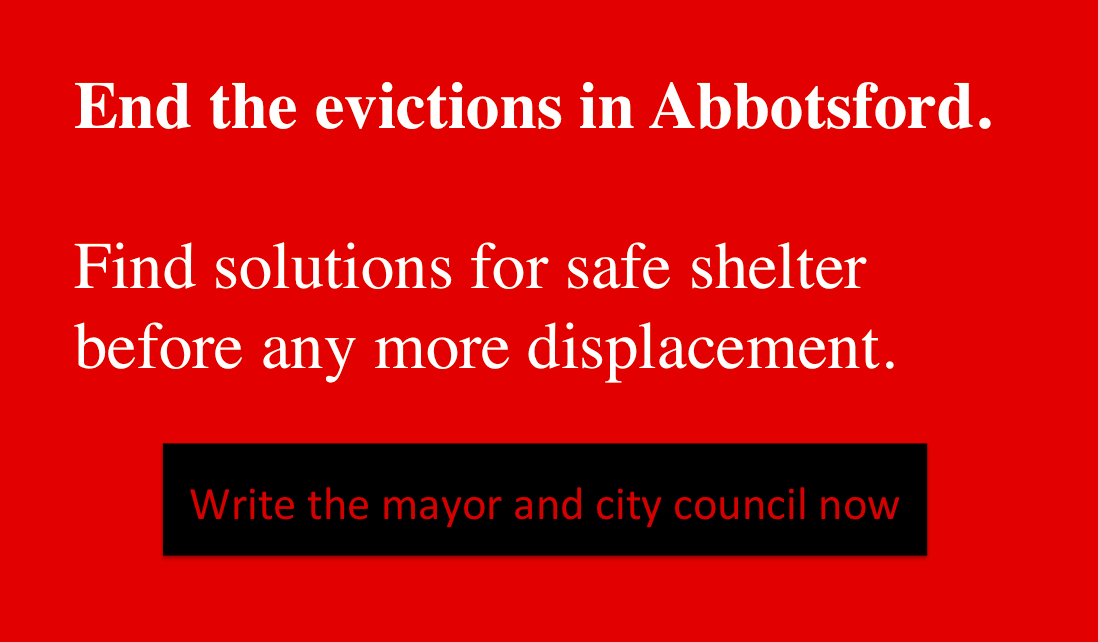 At each of these camps, Norm has found what the city has refused to provide: safety, shelter, and community.

These are important for any person, but for Norm even more so. He suffers from incredible chronic pain and self medicates. His drug use, which is untreated, puts him in danger; living next to people who know him and can watch out for him helps keep him safe. At these camps, he’s found a degree of stability, a place to hold onto his few possessions.

Now the city wants Norm to move again, and they’ve offered him nowhere to go.

There’s no housing sitting empty waiting for Norm to move in - the vacancy rate in Abbotsford is below one per cent. This is what the City has offered Norm: move into the temporary shelter that is already full and regularly turns people away or set up shelter in a park where he will be told to pack up everything and leave every morning. Either way, he will have to give up everything he owns in order to move.

This is the Abbotsford Shuffle.

We’ve asked the City to please stop the Gladys Avenue evictions until they’ve found a place for Norm and others to go. With no housing on offer, they must identify a public space for people to shelter, a place where they won’t be forced to pack up and move every day.

For five years Norm has lived on Gladys Avenue. For five years the City has done nothing but try to make him go away. It’s time to stop the Abbotsford Shuffle.