Tent cities have arisen in the past two years across Lower Mainland B.C. -- in Abbotsford, Maple Ridge, Surrey, and Vancouver. A lack of accessible, safe, and affordable shelter and housing is often cited as the reason. With nowhere else to go, homeless people camping together can be the safest option.

It’s in a tent city where they are able to find a supportive community -- people who will watch their possessions when they need to find food or a place to shower, people who can provide life-saving first aid interventions, and people who will protect one another from the violence that far too often targets people living on the street.

However, many cities prohibit people from sleeping in public or setting up any kind of structure to protect themselves from the elements. More often than not, the response to tent cities has been to dismantle them and evict the people living there.

What this means in practice is that people are forced to hide from authorities and those authorities are empowered to move homeless people along from the places where they feel safe.

In Abbotsford, a group of homeless people represented by Pivot are taking their city and police to the BC Supreme Court to protect themselves from bylaw enforcement that has resulted in slashed tents, confiscated possessions, and evictions from public spaces. They’re not alone. It’s how homeless people in just about every city in this province are treated.

When they go to court this summer, they won’t just be defending themselves – they’ll be representing anyone who has ever lived without a home, and tried to do it together.

Here are the people whose stories, in one way or another, will finally be heard. 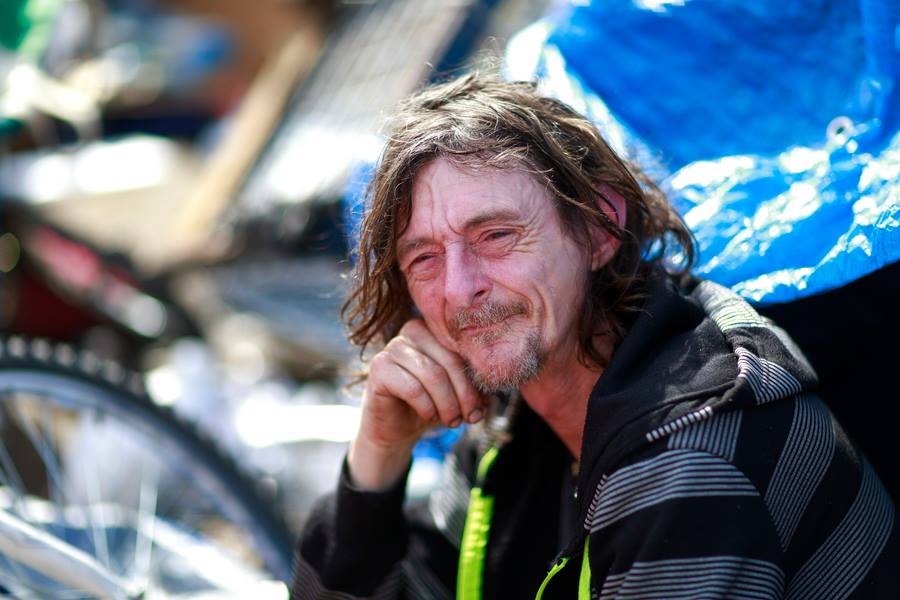 Harvey lives in Abbotsford. He’s been on the streets off and on for nearly 15 years of his life, many of those years spent living in a tent. He tries to live with, and next to, people he knows and trusts. They move together, work together, and watch out for one another to stay safe.

At every home he’s made, however, he’s been told by city and police to move out and move on.

“I sleep in a tent. I’m staying under a bridge now. Prior to that I tried to be out in the open to keep my tent dry. When you get wet, you get sick. But if you go anywhere else they just tell you to pack it up. Out of sight, out of mind, they call it. They want us to hide, I guess.

“We don’t get to live a normal life, we’re always on guard.” 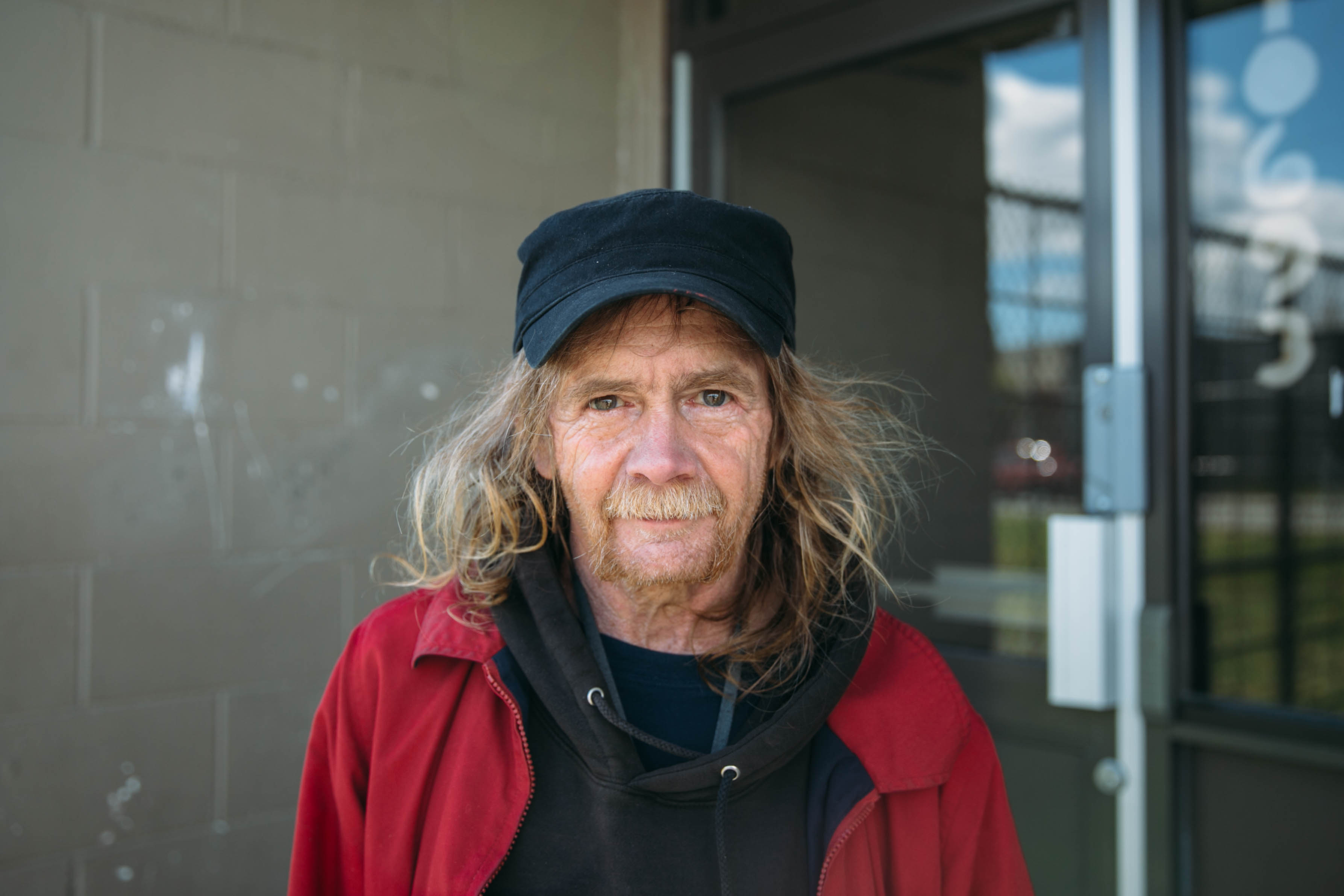 Doug has been houseless in Surrey for nearly six years. He’s one of the hidden homeless – often he sleeps on friend’s couches, and before that he slept in his truck until it was stolen. When there’s nowhere else to stay, he camps in an industrial area with the dozens of others along the city’s 135A Street. Directly across from the Front Room, one of the city’s few shelter locations, campers have access to the resource centre’s services, such as food and showers.

They’ve also been the target of ongoing bylaw enforcement, which includes regular sweeps of the street during food lineups. City officials gather up unattended belongings, tossing them into the back of a truck and taking them away before the owner returns. Many used to camp in a vacant lot at the corner of the street; they were kicked out by police, their possessions taken and trashed. The lot now sits empty, surrounded by a fence that keeps everyone out.

“I come around here because I’m one of the few people who carries Narcan [the overdose prevention drug]. I’ve had to give it more than 20 times. I try to keep a kit on me all the time, but sometimes they run out of them.

“I stayed at the park. When the police came to kick us out, they didn’t warn anyone. They just picked up your stuff and threw it away. Whatever you couldn’t hold onto was gone.

“You take their tent, you take their possessions, you might as well take the person. You’ve left them with nothing. You’ve turned them into a thief.” 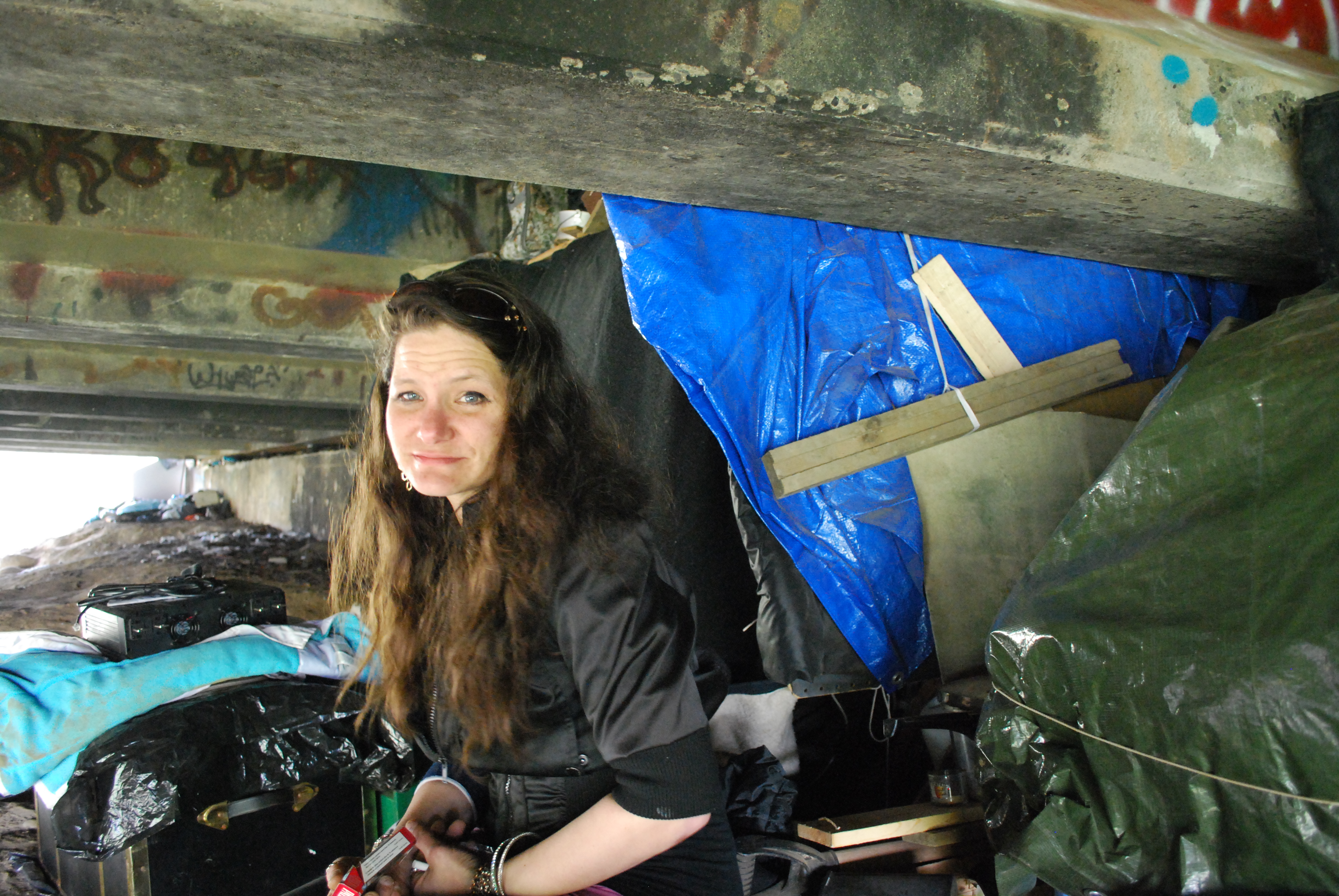 Until recently, Nadia was living beneath an overpass in Abbotsford. Nothing but a few metres of concrete separated her from the traffic rushing overhead, an unrelenting and constant drumming sound that carried down at all hours. Nadia is one of the few women who live on the streets outside of a relationship. Those that do are especially vulnerable, subject to violence and assault. Nadia camped here with friends, forging a community that offered her safety.

Separated from her daughter, who now lives in Vancouver, Nadia had lived here and in nearby locations for years. A police investigation into a murder in the area forced her out. She lost all of her possessions in the process, as her home was ransacked during her absence.

“I’ve been underneath this bridge for almost nine years. It hasn’t been too bad, now that I’ve got Harvey living next door to me. But at first it was really scary. I didn’t know if someone would come in the middle of the night and slice my throat. Being a single female out here can be scary.

“I’ve had cops hit my tent with their baton when I’m asleep. It scares me. I don’t know what to think sometimes. They’re there to serve and protect us, but are they really?” 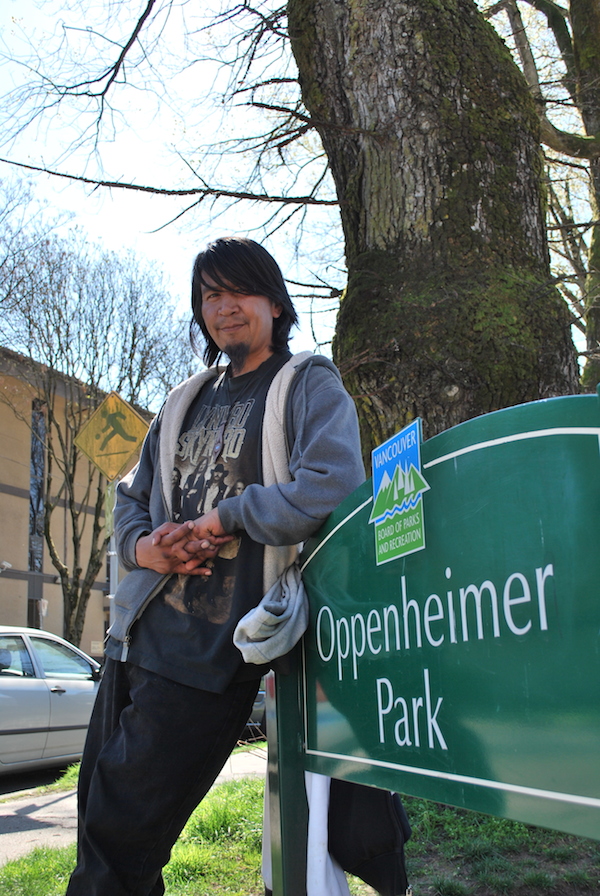 Gary was one of hundreds of homeless and low-income residents who lived in the tent city in Vancouver’ Oppenheimer Park last summer. A longtime site for people to sleep overnight, a small group of community activists came to camp with those homeless Vancouverites and highlight the need for affordable, clean, and safe housing.

Gary was there from the beginning, finding an Aboriginal community that helped him understand homelessness and the legacy of colonialism. Erected in July, the city evicted residents the following October, with the promise of shelter and housing. Gary lost his room at the temporary housing created by the city at the Quality Inn on Howe Street. He’s back living on the streets.

“I can never forget tent city. We were able to prove that we’re here, even though we have nothing.

“I was there because I couldn’t go to any of the shelters. They were all full. And I couldn’t go the old park I stayed at, because I was kicked out of there, too. I knew I had to go somewhere to sleep. They don’t care where it is, as long as they don’t see you.” 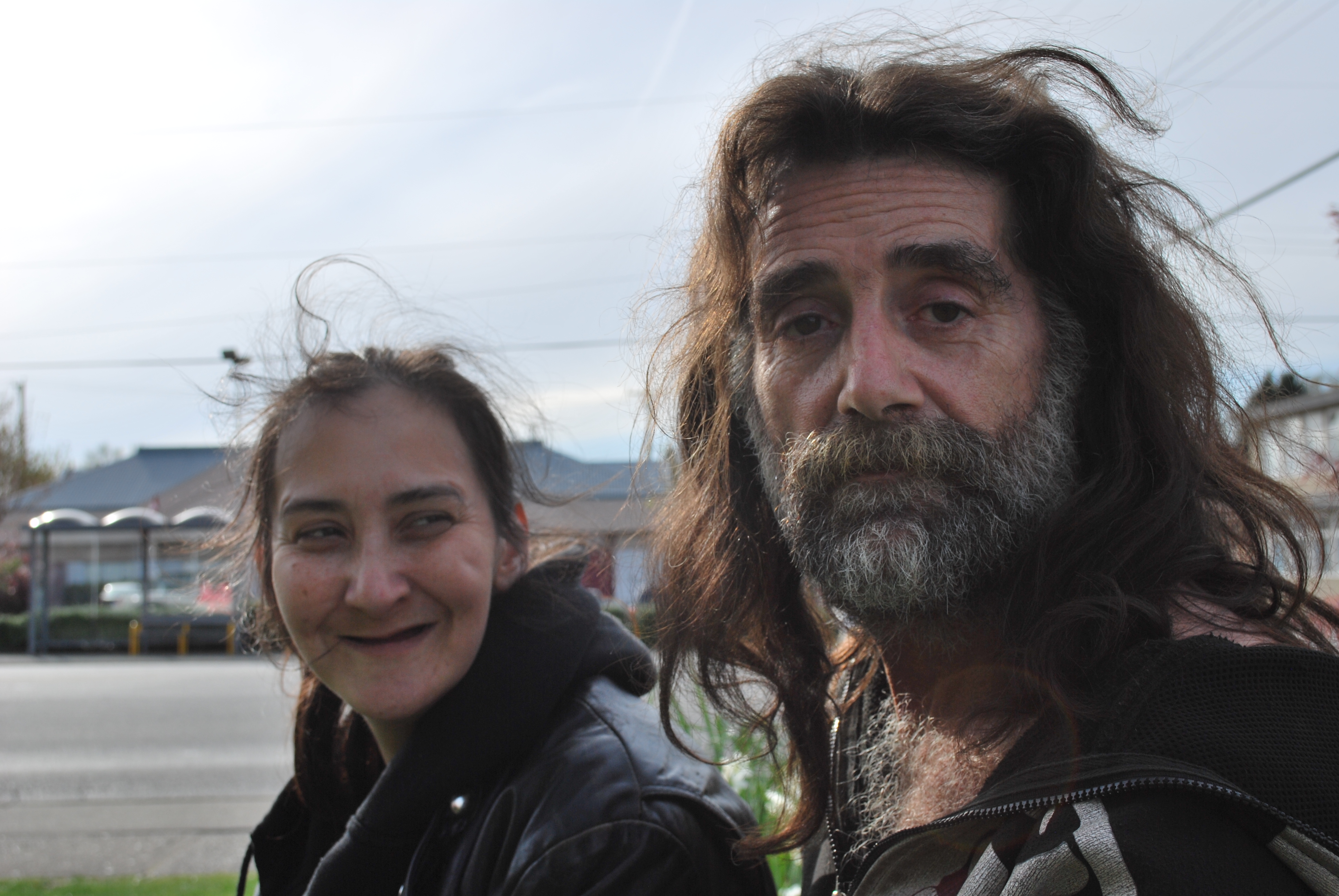 Holly and Allan are longtime residents of Abbotsford and active members of the community. For years, they’ve alternated between living indoors and outdoors. Their story is heart-breakingly common: saving enough for a deposit on an apartment, only to be evicted a few short months later for circumstances beyond their control, losing their possessions in the process.

Without a home, they choose to live on the streets so that they can live together. Abbotsford, like many municipalities, has insufficient shelter space for women, and no shelters where couples can be together. Instead, they elect to face the dangers of living ‘rough’, camping together until they can earn enough money through social assistance and binning in order to put down yet another deposit on an apartment.

“It’s hard to get out from being in this rut because everyone looks down on you. They just keep making everything harder and harder.

“We don’t want to get attached to anything because we know somebody’s going to steal it. I’ve had a camp near someone’s place and they just came and took everything. It wasn’t other homeless people, it was the people who owned the businesses. They came along and destroyed everything we own.

“It’s way too restless of a thing. I just want to get out of it now.”