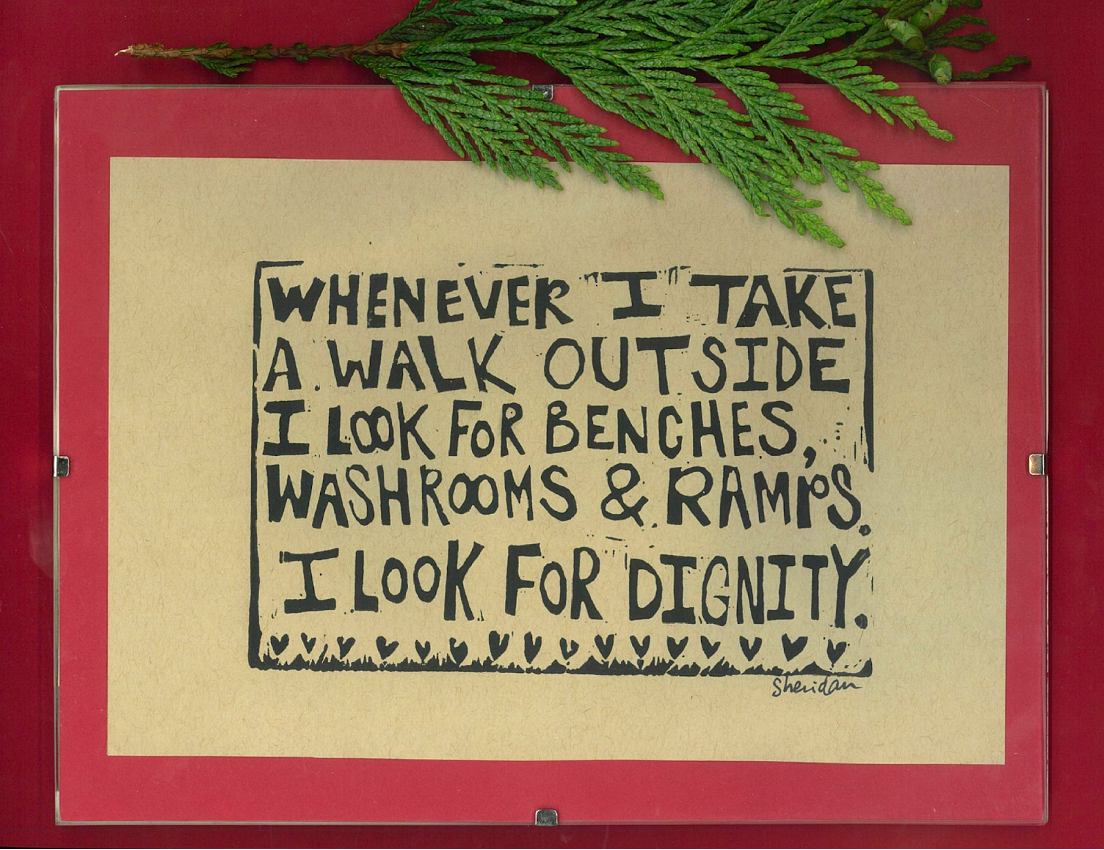 Image: A black linocut print made by SHERIDANPRINTS. Image text: “Whenever I take a walk outside I look for benches, washrooms & ramps. I look for dignity.” The linocut features a row of hearts at the bottom. The print has a cedar branch hanging above it. Linocut art included with the permission of SHERIDANPRINTS

This year’s blog features an interview with Gabrielle Peters. Gabrielle is a disabled writer and policy analyst and a commissioner on the Vancouver City Planning Commission.  She is co-founder of Dignity Denied and the Disability Filibuster. Gabrielle’s work often focuses on further developing the radical theory of accessibility by integrating the lessons of disability justice, harm reduction, trauma-informed practice and grassroots community development and transformative change activism.

On Access Awareness Day, we are reminding municipalities that accessible and inclusive communities don’t rely on municipal violence to displace people.

Gabrielle, what are your thoughts on Street Sweeps?

GP: I have some strong feelings about the issue of Street Sweeps and the criminalization of poor people, as a pauper crip. Anyone who fails to understand opposition to Street Sweeps as an important disability justice issue is uninformed (perhaps, willfully?) about disability history. Modern Western ableism is a tool of white supremacy, colonialism and capitalism to exert power and control resources. Ableism is historically rooted, interwoven, supporting of and intersecting with other oppressions and embedded and endemic throughout every aspect of Canadian society.

Can you share some context on the criminalization of poor disabled people?

GP: A good place to start is the history of laws around poverty. Tracing this back to when eugenics first emerged, the procreation of the pauper class was a major concern of eugenicists seeking to build their "master race." They falsely asserted that being poor was a consequence of being disabled, specifically they argued that it reflected "inferior genes." They saw this as a particular threat to the future because of the differential birth rate between the pauper class and "the morally and socially superior upper classes...had relatively small families." It is important to remember that to eugenicists (then and now), being racialized alone was sufficient cause to fall under the ‘inferior genes’ category, poor or not.

GP: British Columbia and Alberta were the only two provinces in Canada to pass actual eugenic laws allowing for the sterilization of people by the state. The laws targeted people in psychiatric institutions or institutions for people who were intellectually disabled, which included people with mental illness, people who were intellectually disabled and racialized and/or poor people who were disabled or not. Indigenous Nations in particular were targeted. We know that the sterilization of Indigenous women has continued long past the revoking of these laws.

Where else was ableism legally justified?

GP: Consider the Immigration Act of 1910. The Eugenics Archive describes that this Act was made  "in the spirit of making sure that only the best individuals entered and remained in Canada” gave Cabinet the power to deny entry to prohibited classes of individuals, and also strengthened the government’s power to deport immigrants belonging to those same “prohibited classes.” Those classes included, according to the act:

Even today, Canadian immigration laws left no doubt about this connection, making allowances for 'some' disabled to immigrate if they or their family had the wealth to do so.

Alexandra Minna Stern describes these sterilization programs and legislative controls as part of constellation of legislation that “introduced values of sexual purity, racial segregation, and reproductive control into Canada’s approach to marital unions.” How does this historical context shed light on current accessibility and inclusion work?

GP: Flash forward to today, and we have seen some middle class disabled people claiming that poor people are interfering with their accessibility. And, locally, we even had a disability organization comment in the media that Indigenous land defenders were interfering with accessibility. These positions are completely contrary to disability justice.

I want to share the history of the “ugly laws.” The Eugenics Archive documents these ordinances and their impact. These laws which existed in various cities in U.S. banned visibly disabled people from public space and while Canada did not have “ugly laws” many Canadian anti-vagrancy laws worked in much the same way as they required you to be someone who could support yourself.

In the 1970s, after the well-publicized arrest of a man in Omaha for violating the ordinance, the disability movement began its push for the Americans with Disabilities Act (ADA). Disability movement activists seized on the law, which they called the “ugly law” as an iconic story of generalized state-sponsored disability oppression.

Thanks for sharing this disturbing legal history. When I looked into the “ugly laws” it looks like they explicitly targeted poor people, by criminalizing begging. Susan Schweik explains that the link to begging, poverty and homelessness was minimized or forgotten in the fight against these ordinances. This is a really important intersection - the criminalization of poverty and disability. Fundamentally, these laws were anti-panhandling laws.

GP: As many have explained, capitalism needs poverty but it is also threatened by the potential power of those it has thrown into the “surplus population” pile.  Ableism and accessibility can’t be discussed outside of the carceral system and its role in segregation, containment and repression. We see over and over again how this oppressive system will adapt and co-opt the language and tools we develop to fight for our collective liberation, and use those same tools against us to divide us and elevate a few at the expense of further marginalizing the rest. It is absolutely vital that disabled people not allow this to happen. The enticement is greatest for disabled white people whose politics can too often veer into “look, I’m white just like you” in our pursuit of “acceptance” and “inclusion.” This is why it is imperative that people apply a strong race and class analysis to their position on disability and accessibility.

Why do you think these intersections have been forgotten?

GP: Because power wants to hold onto power. For reasons that are obviously attributable to whiteness and capitalism, many disabled advocates today lack any class analysis of disability.

Eugenics has also informed Canadian city planning overall. The current definition of what is "standard" or "best practice" is informed by eugenics.  Anti-vagrancy laws and widespread institutionalization cast disabled people out of cities into the countryside under the auspices of being therapeutic.

I really encourage people to read the section written by Amina Yasin in the Broadbent submission on BC accessibility legislation that was jointly written by myself, Amina Yasin and Karen Ward.

The minor measures that have been taken by city planners after decades and decades of disability activism, and the token gestures and mentions about the vague concept of inclusion, have not even begun to make a dent in changing that.

The history you have shared makes really important connections.

GP: Disabled people are pushed to the margins and many of those who are houseless are disabled. Poverty is a consequence of a system not a person. And poverty is a consequence and cause of oppression. Ableism is used to ‘rationalize’ poverty of some. All of these exist to support the power and wealth of others. None of these things, especially accessibility, can be examined or understood in isolation of capitalism and white supremacy.

Thanks Gabrielle. As always, I appreciate the work you do to situate pauper crips within broader struggles against settler colonialism, eugenics, xenophobia, and anti-poor laws and policies.

Dignity Denied: A Defiant Group of Disabled People demanding the right to live in dignity

The Lily: Can loitering and napping in public be acts of resistance?

The Narwhal: B.C.’s extreme heat is here to stay. (features an interview with Gabrielle)

Pivot Blog: Disability, intersectionality, and criminalization: From awareness and inclusion to justice and action

VAGABOMB: Women in India Are Sleeping in Parks to Reclaim Their Right to Public Spaces

The fight to #StopTheSweeps includes everyone targeted by Sweeps - including disabled folks in the Downtown Eastside. Street Sweeps are a disability justice issue.

Take the pledge to #StopTheSweeps

You can also join an upcoming Pigeon Park Block Meeting and hear directly from people with lived/living experience. 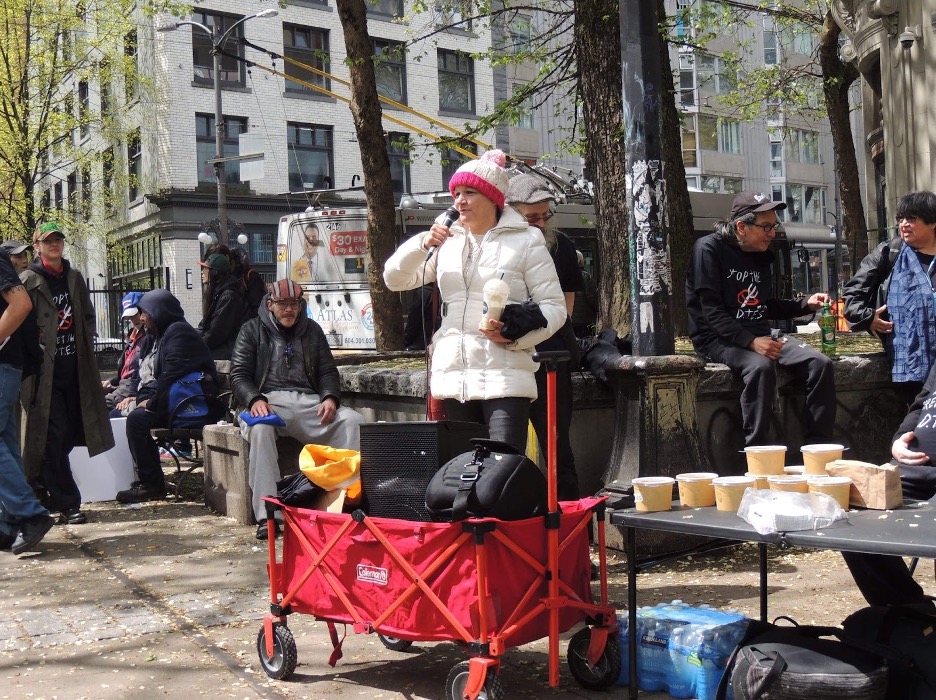