As unhoused people are evicted from Strathcona Park, they look to local and international human rights laws to evaluate government decampment strategy and, based on these laws, issue a significantly low grade of “D”

Vancouver, BC, Coast Salish Territories – Leading up to the April 30th deadline for the decampment of Strathcona Park Tent City, unhoused residents sheltering at the park have issued a low D grade to government actors involved in the eviction. 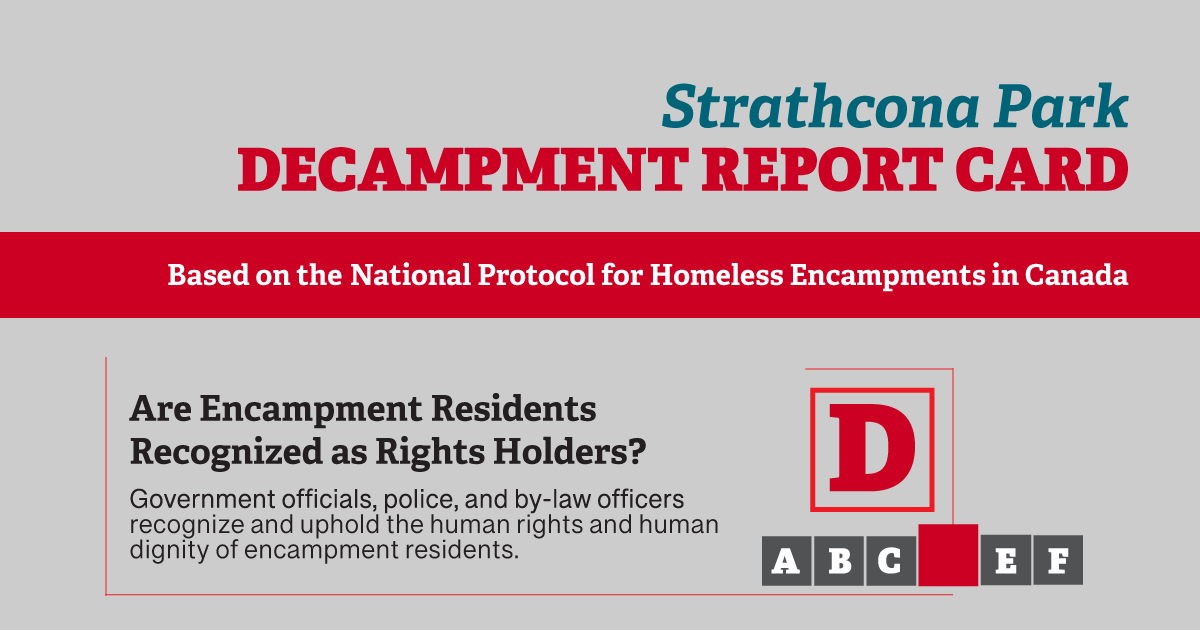 The report card is based on principles in the “National protocols for homeless encampments in Canada” developed by the United Nations Special Rapporteur on adequate housing (2014-2020), Leilani Farha and Dr. Kaitlin Schwan. The Protocols outline practices that adhere to a rights-based approach to housing encampments and the protection of unhoused people as rights holders in government responses to encampments, particularly during forced removals. The report card survey was completed by over 90 unhoused residents of the Strathcona Park Tent City during April 2021, with overwhelmingly low results.

Once averaged, residents issued a low grade of D on every overarching question on the rights of encampment residents:

Other highlights from the report card survey included failing grades for the following criteria:

Unhoused residents and their advocates have repeatedly identified crucial shortcomings in the government decampment process.

It is possible to provide people with adequate, rights-based housing without resorting in coercive, colonial tactics and further displacement

Anna Cooper, a lawyer at Pivot Legal Society, states: “This report card is a clear statement from tent city residents that government actors need to slow down and do better. Despite the government narrative, the resident experience is clearly not of an ethical eviction, nor one that is trauma-informed and respects their rights and dignity. It is possible to provide people with adequate, rights-based housing without resorting to coercive, colonial tactics and further displacement – residents could tell the government how, but they need to be prepared to actually listen.”

Despite multiple forced evictions of encampments over the last 3 years, the problem of affordable and appropriate permanent housing in adequate numbers remains a major gap in efforts to house people living in tent cities in Vancouver.

According to residents, the housing that is being offered is inadequate or inappropriate.

"D"  says, “people don’t want to be pigeon-holed. We aren’t allowed visitors. I have to go to Strathcona park to socialize. I’m 56 do you know how fucking lonely it is sitting in a room by yourself?”

"J" was given five minutes to decide whether to accept a place without her partner present. She didn’t see the unit until she went to pick up the keys two days later. She says about staying in the park: “They don’t understand what’s more dangerous. This is what makes us feel safe. Unless you’ve been in that situation then you can’t understand.”

Your rights as a program participant are totally different. They sprung it on us at the last second

"M" was offered program-based housing. “Your rights as a program participant are totally different. They sprung it on us at the last second. It’s bullshit. I’d almost rather stay homeless instead. Fuck you. It means the city spying on you like a science experiment. Everything they do there is twisted. Make it look like it’s some good thing that’s going to help me. I’ve been homeless since I was 17. All my friends that moved into the Jubilee have been kicked out or they don’t stay there because they hate it so much.”

These experiences are corroborated by what housing rights activists and community organizers are observing on the ground. Fiona York comments, “There’s nothing new or groundbreaking about an eviction process that rushes tent city residents into unseen housing and “programs” that strip tenancy rights.”

On April 6, 2021 the Province, the City of Vancouver and the Vancouver Parks Board reached an agreement to coordinate ending and preventing encampments. The agreement seeks to formalize “effective solutions to difficult social problems like street homelessness and encampments by working together with all levels of government,” according to a government release. However, residents and advocates were not included in these negotiations. The inadequacy of the outcome is reflected in this report card, and the ongoing confusion as government actors provide conflicting partial answers concerning housing availability and by-law enforcement after April 30th.

This [eviction] doesn’t follow Truth and Reconciliation Commission or UNDRIP recommendations or respect the rights, independence and recognition of houseless people and Indigenous people who have been shut out of the so-called decampment process.

Chrissy Brett, an organizer and resident of the encampment reiterates that eviction process is a one-sided strategy: “Communication with governments and BC Housing is like a one-way wampum belt – uploading our experiences as organizers and residents and still not being invited to the table. This doesn’t follow Truth and Reconciliation Commission or UNDRIP recommendations or respect the rights, independence and recognition of houseless people and Indigenous people who have been shut out of the so-called decampment process.”

The Decampment Report Card was developed by The Shift, Pivot Legal Society, Environmental Justice and Sustainability Clinic at Osgoode Hall, and grassroots housing activists currently supporting residents at Strathcona Park. The National Protocols for Homeless Encampments in Canada is the basis for the principles and protocols reflected in the report card.

The report card evaluates the government's effort to decamp unhoused people from Strathcona Park. Some of the issues that the decampment report card looks to evaluate include whether the distinct rights of indigenous people are being respected, whether there are prohibitions on forced evictions of those sheltering outside, and whether residents are being relocated to long term affordable and accessible housing.

The “National protocols for homeless encampments in Canada”, developed by Leilani Farha and Dr. Kaitlin Schwan, is based in both local and international human rights law, and the recognition that encampment residents are rights holders and experts in their own lives. The Protocol is intended to assist governments in realizing the right to adequate housing for this group.

READ the National Protocols for Homeless Encampments in Canada

This report card was based on report card surveys filled out by 94 residents living in Camp HOPES (Strathcona Tent City) during the week of April 12th, 2021. A small number of surveys could not be included due to errors in how they were completed.

The Decampment Report Card is a new standardized measure being developed to eventually provide government actors with clear, succinct feedback on the impact of their engagements with tent city residents.

About Environmental Justice and Sustainability Clinic

Pivot Legal Society is a leading human rights organization that uses the law to address the root causes of poverty and social exclusion in Canada. Pivot’s work includes challenging laws and policies that force people to the margins of society and keep them there. Since 2002 Pivot has won major victories for sex workers’ rights, police accountability, affordable housing, and health and drug policy.

THE SHIFT recognizes housing as a human right, not a commodity or an extractive industry. The Shift restores the understanding of housing as home, challenging the ways financial actors undermine the right to housing. Using a human rights framework, The Shift provokes action to end homelessness, unaffordability, and evictions globally.

Press Releases, Blog, Homes For All.