Report back: advocating for a made-in-BC model of decriminalization

Parts of this blog are excerpted from an October 2021 letter authored by Pivot and VANDU and sent to the Minister of Mental Health and Addictions, Assistant Deputy Minister Working Group on Decriminalization, and BC’s Decriminalization Core Planning Table.

Drug decriminalization has been a central goal of Pivot’s drug policy campaign from the very beginning. In 2020, we released Act Now! Decriminalizing Drugs in Vancouver, a report calling on non-federal levels of government to decriminalize drug possession by applying for a federal exemption under the Controlled Drugs and Substances Act. Since publication, numerous jurisdictions have followed our recommendation: the City of Vancouver submitted its application to the federal government in May 2021, while the Province of BC and City of Toronto are in the drafting stages of their applications. Pivot has been a key stakeholder in both the Vancouver and BC processes.

This blog post provides an update on Pivot’s participation in BC’s process, our positions respecting decriminalization and threshold quantities, and our conditions for supporting and providing input on BC's proposed model of decriminalization.

In July 2021, Pivot joined the Province’s “Decriminalization Core Planning Table”, led by the Ministry of Mental Health and Addictions, along with some of our community allies, including the Vancouver Area Network of Drug Users (VANDU). In this role, we provide regular input for the development of a made-in-BC model of decriminalization.

Partaking in a government-led process, whether it be through consultation or participation in a working group, is not a decision we take lightly. Historically and in our experience, these processes are used to divide, conquer, and defang movements; stifle more radical tactics; pit marginalized folks against one another; and generally exhaust our efforts.

Historically and in our experience, [government-led consultations] are used to divide, conquer, and defang movements; stifle more radical tactics; pit marginalized folks against one another; and generally exhaust our efforts.

To ensure our own accountability to the movement to end the War on Drugs, Pivot and VANDU set clear parameters for our participation on the table, based on our mandates and commitment to the leadership of people who use drugs. In a joint letter issued to the Minister of Mental Health and Addictions, we underscored our priorities when it comes to decriminalization:

While we recognize and appreciate the collaborative nature of this process, our mandates require accountability, and therefore that our support be limited only to a model of decriminalization that actually applies to our people. We are unable, for instance to facilitate a model that would continue to criminalize our community—including through the use of low “threshold quantities” under which only people who possess unrealistically small amounts of drugs are decriminalized.

We will only support a model of decriminalization that serves all of us.

Put simply, we will only support a model of decriminalization that serves all of us.

Threshold quantities: a line in the sand

We knew from the outset that “threshold quantities” would be a sticking point for our involvement on the Core Planning Table and, ultimately, whether we’d support BC’s final model. Threshold quantities are the specified amounts of substances under which possession will be deemed a non-criminal offence. For instance, if the threshold quantity for opioids is 2 grams, people who possess greater quantities—even for personal use—remain criminalized, while those who possess less than 2 grams are decriminalized.

If decriminalization is to be effective, threshold quantities (if adopted) must reflect the real patterns of drug use and purchase and be set high enough to protect all people who use drugs.

Pivot and VANDU cautioned against too-low thresholds in the context of Vancouver Model development, arguing that they disproportionately impact people with mobility issues, people who purchase for others or who rely on others to purchase for them, people in rural communities, people who use large quantities of drugs, and others. VANDU went on to conduct a rapid evaluation, surveying 161 of its members regarding their drug use and purchasing patterns. The results of this rapid evaluation illustrated that people who use drugs have threshold needs that are significantly higher than those proposed by the City. Ultimately, the City’s rejection of VANDU’s data—in favour of quantities well below the amounts typically possessed by our community—forced Pivot and VANDU to withdraw support from that process. 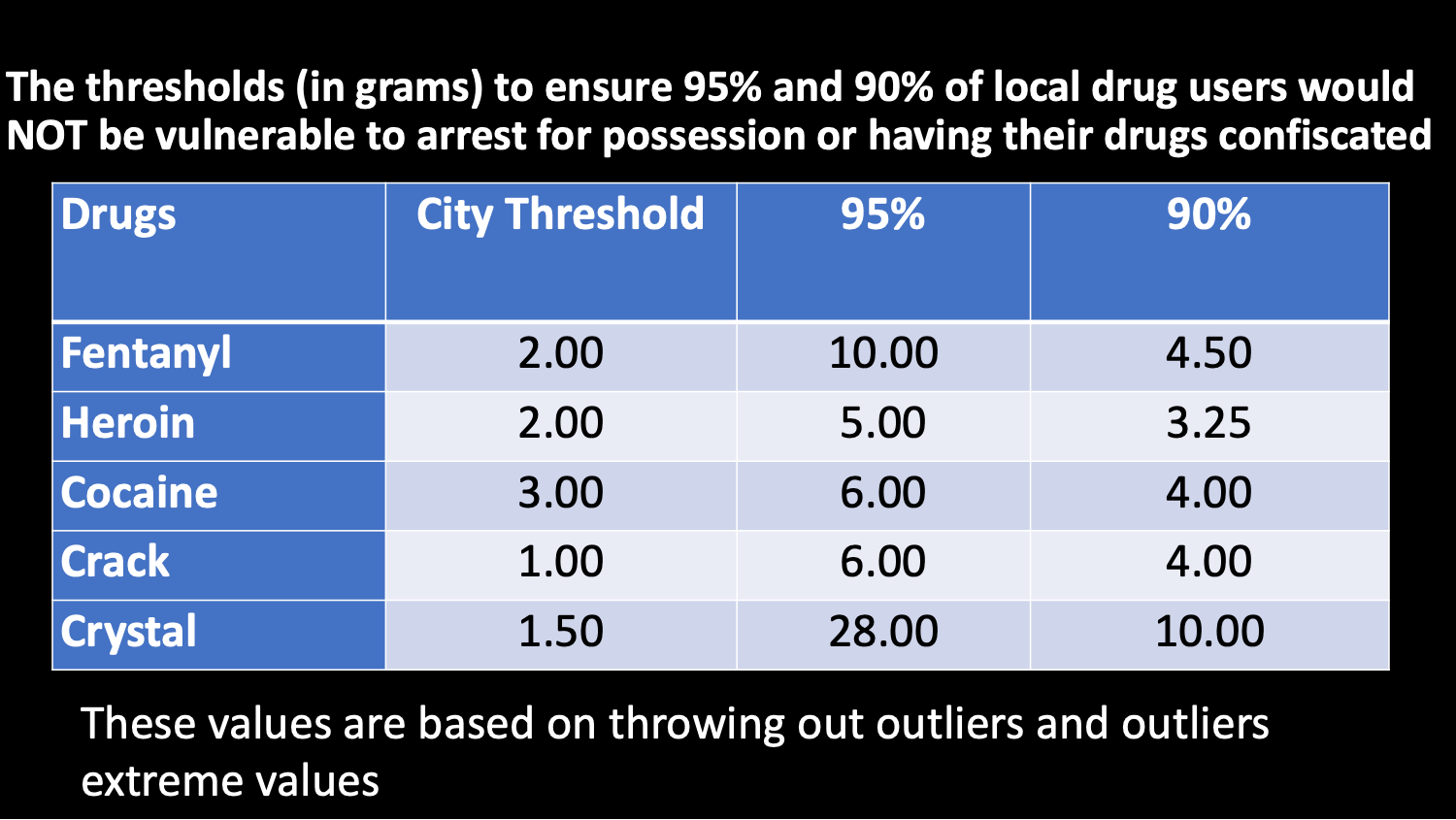 Fig 1: Table depicting the City of Vancouver’s proposed threshold quantities, as compared with those needed to protect 90-95% of people who use drugs in the DTES, based on VANDU’s data. Whereas the f drug users. City proposed a threshold of 2 grams for heroin, VANDU’s data demonstrates a need for 5 grams.

Learning from our experience with Vancouver’s disappointing process, Pivot and VANDU have clearly stipulated that throughout BC’s process we will not, subject to direction from the community, support any thresholds lower than the numbers generated under VANDU’s evaluation. This is the only way we can remain accountable and in service to people who use drugs. We also acknowledge the specific, urban context in which VANDU’s numbers have been generated and agree that communities outside of Vancouver, including rural and remote communities, may require significantly higher thresholds to reflect on-the-ground realities.

We should be able to expect that BC’s model of decriminalization won’t cater to the carceral logic of racist, colonial, anti-poor policing.

We know that communities throughout BC support an evidence-based approach to drug use that is foremost informed by the experts: people who use drugs. Time and again, we’ve heard government agree that criminal ‘justice’ is an inappropriate tool to address drug use. Accordingly, we should be able to expect that BC’s model of decriminalization will reflect these principles, without catering to the carceral logic of racist, colonial, anti-poor policing.

In general, Pivot supports the model of decriminalization collaboratively authored in the draft 2020 Civil Platform of the national Strategy Group on Drug Decriminalization. In sum:

We call on the Government of Canada to adopt an anti-racist, anti-colonial human rights– based approach to drug policy that does not rely on criminal, administrative, and medical interventions that maintain the goal of dissuading drug use, and under which people who use drugs continue to be oppressed, coerced, and silenced. Among other measures, our proposed drug policy includes:

Fully decriminalizing all drug possession for personal use, as well as the sharing or selling of drugs for subsistence, to support personal drug use costs, or to provide a safe supply. This requires the removal of criminal sanctions, and all other penalties (administrative or otherwise) as follows:

Where we stand: our commitment to full decriminalization 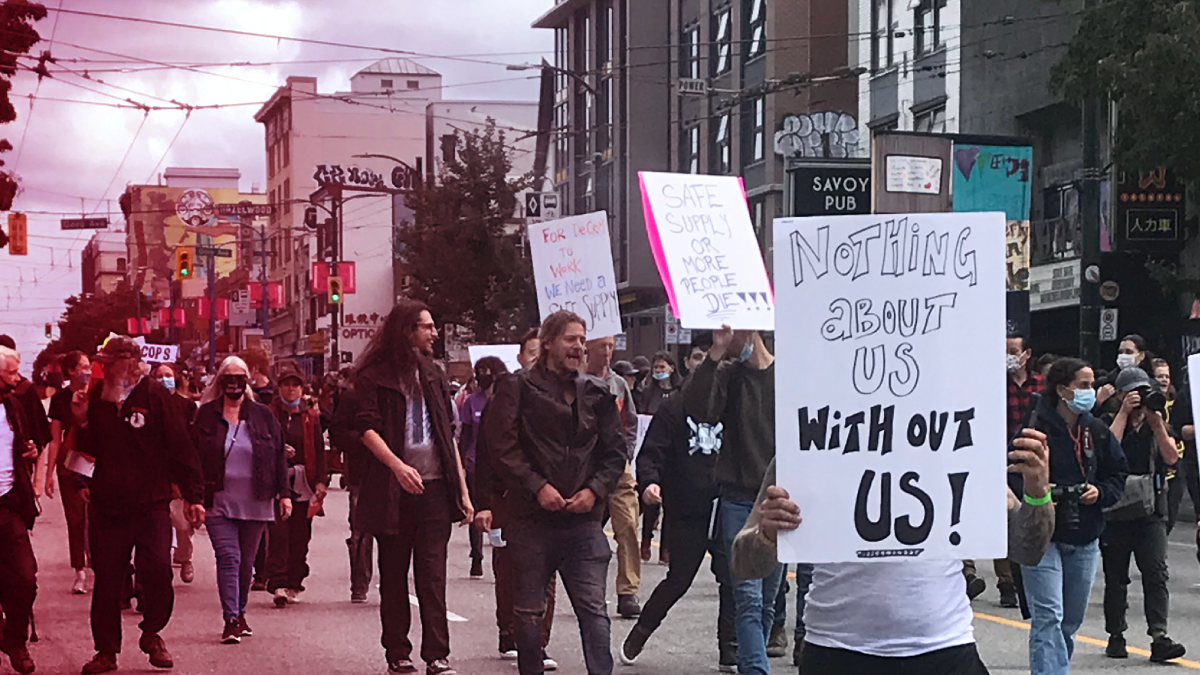 Pivot and VANDU will continue to participate on BC’s Decriminalization Core Planning Table provided the model adopted follows the leadership of people who use drugs and in fact decriminalizes the most targeted drug users.

With these goals and experiences in mind, Pivot and VANDU have decided to base our participation on the Core Planning Table on the following criteria:

Based on the above, Pivot and VANDU will continue to participate on BC’s Decriminalization Core Planning Table provided the model adopted follows the leadership of people who use drugs and in fact decriminalizes the most targeted drug users.

We hope BC will follow the leadership of people who use drugs when developing its decriminalization model. Our stance on decriminalization is clear: we will only support a model that decriminalizes all of us, in solidarity with drug users everywhere. Stay tuned for updates on our involvement!