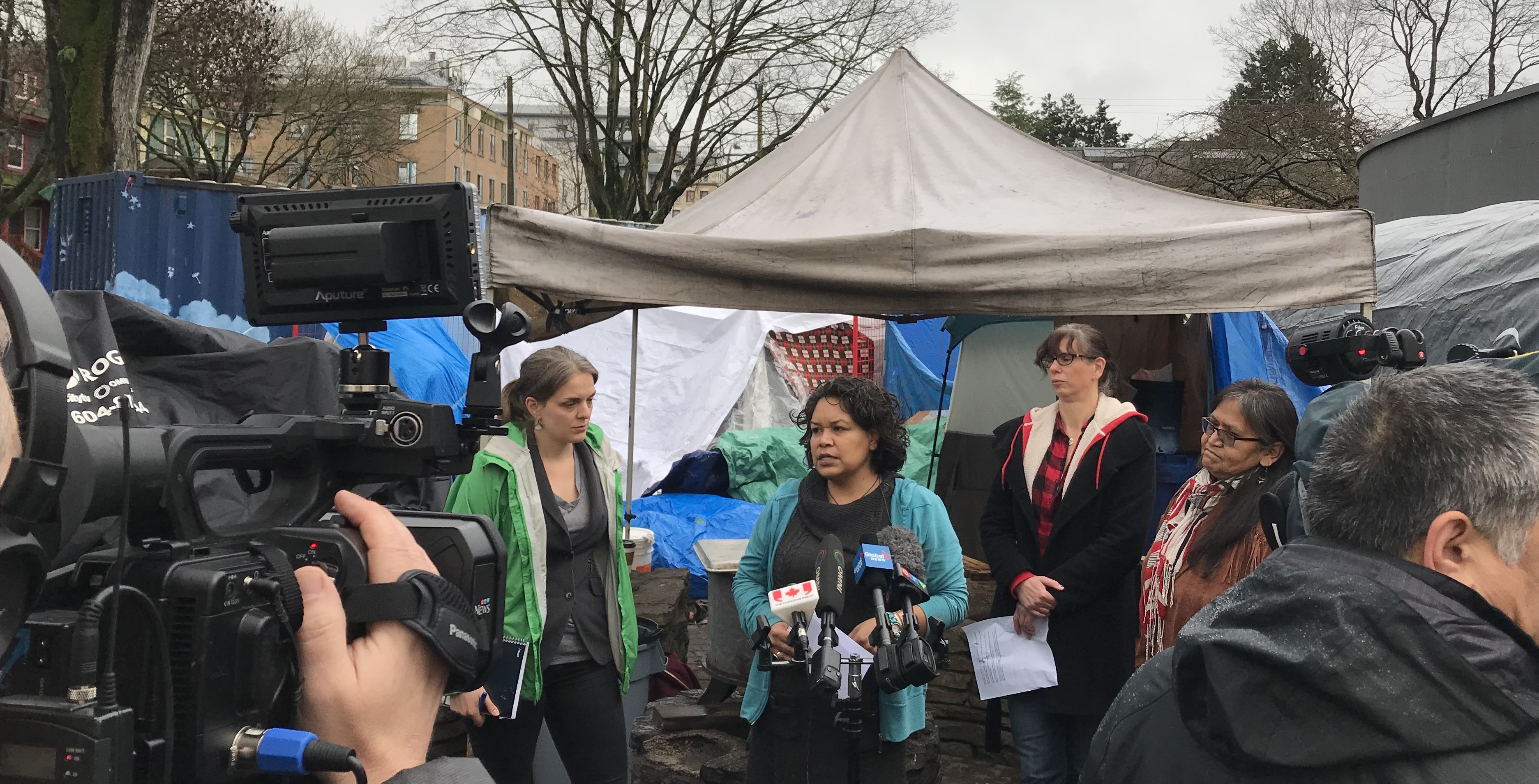 What: December marks the 1-year anniversary of the latest of four iterations of Oppenheimer Park tent city. Park residents, neighbours, and advocates will be gathering for a warm meal, music, and legal information about rights for people who rely on public space for survival, and to celebrate resilience in the face of a housing crisis, a drug poisoning crisis, and the ongoing criminalization of homeless people.

Who: Park residents and their supporters and advocates from Carnegie Community Action Project and Pivot Legal Society will be available to speak to the media at a press conference prior to the community celebration.

Why: Oppenheimer Park tent city residents are celebrating one year of community and resilience in the face of a housing affordability crisis, a drug poisoning crisis, and systemic criminalization of the Park’s residents. Park residents are threatened with injunctions, decampment plans, and the destruction of their tents and belongings on an ongoing basis. Today residents and supporters celebrate survival despite the lack of support and resourcing from City officials and decision makers.

Any plan to decamp the Oppenheimer Park tent city without accessible housing violates the right to adequate housing as a fundamental human right as recognized by the National Housing Strategy Act. City officials’ reliance on shelter beds and temporary warming centres or EWRs to evict resident of the park, is ineffective and unproductive, as people find themselves back on the streets when they are asked to leave these temporary shelters.

Residents have regularly requested assistance from city officials to aid in their survival by providing resources and programming given that no safe, permanent housing is being made available. Increasing the safety and well-being of the people residing at Oppenheimer Park requires deep collaboration with resident to put supports in place (hot water, peer support, warming tents, access to field house for storage and food service, and storage for belongings in the absence of other options) so that residents can live humanely.

There are well over 2223 homeless people in the City of Vancouver. Most have no access to daytime shelter, and at least 600 people do not have overnight shelter options. Tent cities like Oppenheimer provide safety in community. At Oppenheimer Park, residents can access a VCH-sanctioned, peer-run Overdose Prevention Site, basic sanitation services, some food security, and peer support. Tent cities are often considered “harm reduction zones” in the midst of housing crises, as they reduce exposure to external violence and the elements and provide basic necessities and a community of peers.

Finding appropriate housing takes time, sometimes months, to ensure it is stable housing and suitable for the individual or family.

Long considered a safe place and social justice zone, Oppenheimer Park has a long history for Indigenous people. “From time immemorial, this area was a gathering place for Aboriginal people, a place to hunt and gather and meet others. First Nations people who felt unwelcome in Stanley Park after its founding in 1887 made this park ‘their home’” (Heart of the City Festival). It is the only park designated by the Parks Board as a site for free speech during that decade of marches, sit-ins, and mass demonstrations.

Press Releases, Homes For All.