We choose that location for the launch because it is a stretch of public sidewalk where many residents (particularly women) have reported having negative interactions with guards, but the issue is bigger than that corner. In 2006, the private security industry employed over 102,000 people across Canada. By  2011 that number had increased to approximately 140,000. While the industry has grown rapidly over the past decade, there has been little public discussion or debate about the role these private companies are playing in policing our neighbourhoods.

In BC, a few high profile cases have directed some attention toward accountability issues within this large and lucrative industry in the last two years. These cases, including five men who alleged violence at the hands of Harbour Centre Mall guards, a guard who threw a one-legged man from his wheelchair, and another case involving an aspiring teen journalist who was handcuffed and detained by guards at Metrotown Mall, have centred on use of force. Just as important are the daily, seemingly more benign interactions marginalized people have with security guards. These interactions undermine the rights, dignity and equality of low-income people and normalize the practice of private companies treating public property as if it were private.

Several stories about those types of interactions were shared at today’s press conference. Sex workers and outreach workers shared stories of being harassed, mocked and threatened by security guards who call them names, take their photos and drive 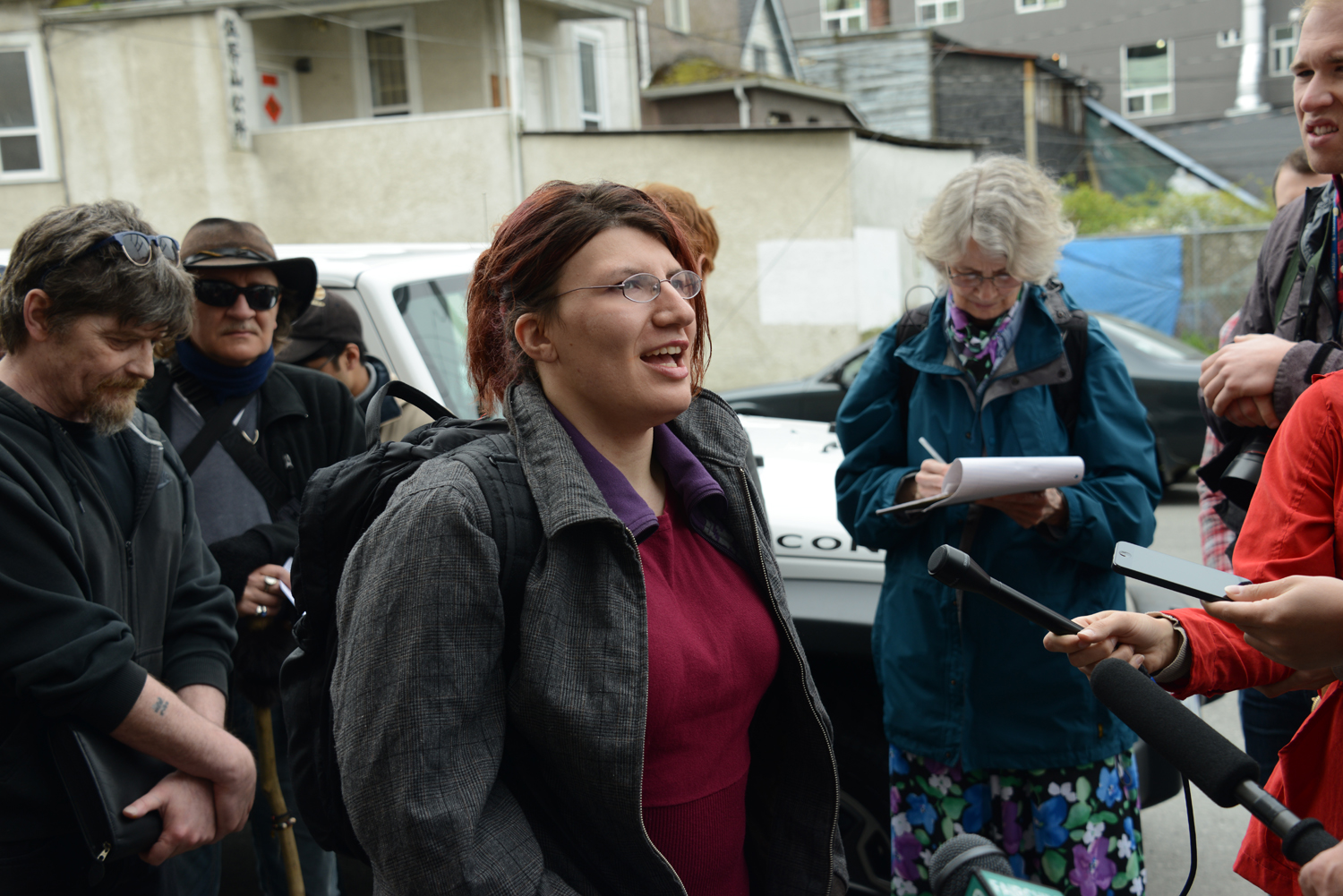 them into alleyways. Other residents talked about how it feels to be told to move along when they stop to take their keys out or to chat with a neighbour in front of their own buildings. People shared stories of being told to move from stoops of unoccupied buildings and overhangs and of being followed by uniformed guards, paid to “be a presence” on the streets.

The effects of these interactions can be deadly. For example, when sex workers are displaced by guards who pressure them to get out of sight, they are forced to work in dangerous, isolated locations. But even where there is no threat to physical safety, the cumulative effect of these interactions on individuals, as well as on equality and human rights, cannot be underestimated.

With this rights card we are addressing two major issues that undermine accountability among private security guards. First, because guards wear uniforms and drive marked cars many people don’t understand that when patrolling public property, these  security guards have no more legal power as any one else on the street. Guards are able to rely on “presumed authority” to move people along, ask invasive questions or compel people to cease a legal activity. On private property, guards have some additional powers invested in them by the owner, but in all cases, they must abide by BC's Human Rights Code. Our new rights cards clearly lays out guards (limited) powers on both public and private property.

The second accountability issue this card addresses is that most people who come into contact with private security guards have no idea who regulates industry or where to go to make a complaint if they feel a guard has violated their rights. In BC, security businesses (and the guards they employ) must be licensed through the Ministry of Justice’s Security Programs Division. The cards lay out the complaints process and provides contact information.

These new rights cards can’t address the broader question of whether private security patrols have a legitimate role in public space. Security guards who work on public property are almost always contracted by Business Improvement Associations. These security companies offer their clients “off the shelf” security packages that may include foot, bike or vehicle patrols. The question is whether an arrangement where business owners provide the funding and direction to uniformed guards can effectively meet the security needs and uphold the equality rights of everyone in a community.

There are alternatives to this for-profit security model, including a community-based patrol program staffed by local residents 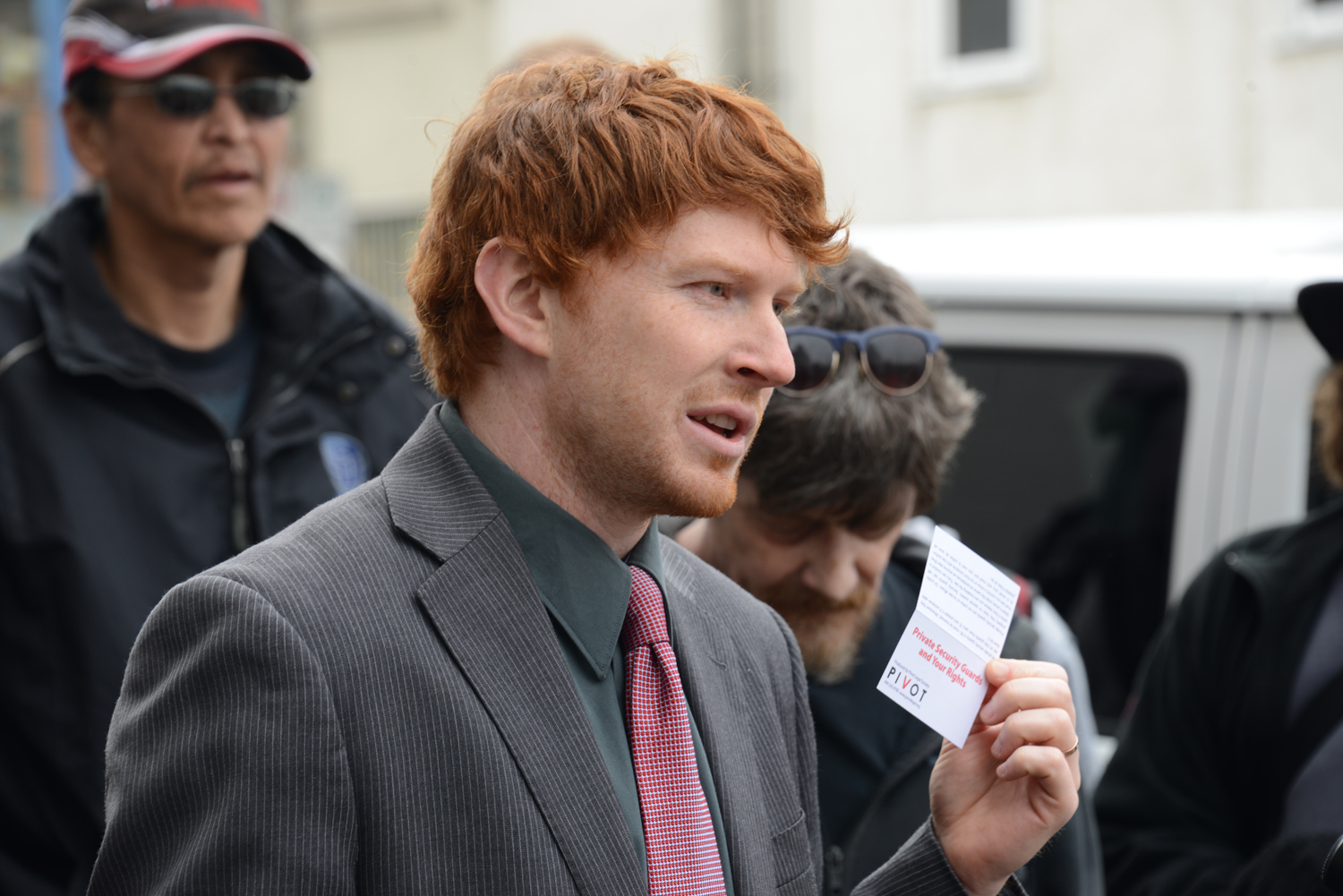 and run by the not-for-profit Mission Possible that has been piloted by the Strathcona BIA.  Our hope is that community-based alternatives to private, for-profit security patrols become the new norm, but regardless of who runs private security patrols, it is critical that people understand their rights and where to go to get help if they believe those rights have been violated.  It is also important that individual guards, security companies, and their clients know that they will be held accountable if guards overstep the bounds of authority.

We will be handing out cards to people in Vancouver and to organizations across BC in the coming weeks.

See more photos from the release of the rights cards!

For information on the cards or to place an order for your organization: http://bit.ly/11wKXOj