Journey to the Supreme Court of Canada

Yesterday was the culmination of a pretty amazing journey for me.

I sat in the front row at the Supreme Court of Canada as the as the federal government tried to persuade the country’s top court that Sheri Kiselbach, a former sex worker with 30 years of experience and Sex Workers United Against Violence (SWUAV), a non-profit organization run by and for street-based sex workers in the Downtown Eastside, do not have standing to challenge the laws related to adult prostitution because they are not directly affected. Among the people sitting with me were Sheri and DJ. DJ is a member of SWUAV and has been involved with Pivot since we first started looking at the issue of sex workers’ safety ten years ago. 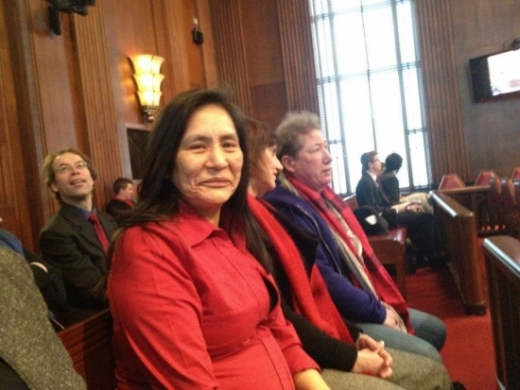 Over the course of a decade, Katrina, along with the community of sex workers and lawyers that has developed around this case, have done a spectacular job opening up space for constructive dialogue about sex workers’ right to safety, dignity and equality. I have so much admiration for the work they have done, but despite over five years of being around the campaign as a staff member at Pivot, it still didn’t really feel like my issue.  In fact, I was always a little nervous to talk about SWUAV and Sheri’s Charter challenge and Pivot’s sex work and campaign more generally. When Katrina invited me to join her at the Supreme Court and to bring DJ with me across the country to attend the hearing, I decided full immersion was probably the best way to get comfortable with the issue.

Although SWUAV members and Sheri weren’t required to testify (in fact, at the Supreme Court of Canada there are no witnesses at all, just a lot of lawyers talking), it was really important that our clients be there to witness the hearing and represent their community. We weren’t sure if anyone from SWUAV would be up for the trip, but DJ, who has been so integral to this campaign, made up her mind to come with us. She was nervous and the odds were stacked against her - no government ID, no phone and having never been on a plane (not that I have been on many myself), but she was determined, and Tuesday morning, the two of us made our way to the airport, got through security and boarded our flight.

Our already long journey was drawn out by missed connections and icy runways.  There were some challenges and lots of firsts for DJ, but as we crossed the country we talked to people in airports and planes about where we were headed and what we were doing. The support they gave us, despite knowing next to nothing about the issue, filled us with confidence and kept us going.

When DJ and I set off on our journey, I thought I had a reasonably clear understanding of what this case was about. Intellectually I understood that in 2007, the case started out as a legal fight to have laws that criminalize sex workers and force them to choose between their safety and their liberty struck down. When the federal government decided to challenge rights of the plaintiffs to bring the case forward, the case also became about access to justice for vulnerable people. This trip has deepened my knowledge about the legal issues involved in this case, but it has left me with a much more visceral understanding about why carrying this case forward while the government dragged us through appeal after appeal was so important in spite of having no funding and given all the other challenges in our clients' lives. When DJ got on that plane, the fear clearly visible in her face and posture - she was standing up to a government that chose to use its vast power and resources to try to shut out the voices of women in her community, who also happen to be some of the most marginalized and vulnerable women in this country.

It has been an uphill battle, but our clients aren’t fighting it alone.  Getting this far our was only possible because of the generosity of our supporters in Vancouver, of lawyers who have given thousands of hours of their time and of activists in Ottawa who opened up their homes to us. Public interest organizations from across the country intervened in the case in support of our clients right to bring their case forward. Sex workers' rights groups here in Ottawa, from Toronto and from Montreal gathered outside the courthouse and braved the  -11 temperature for a rally in front of the Supreme Court in support of DJ, Sheri and all of the Downtown Eastside sex workers who, despite all the challenges they face, have refused to give up their fight for safety, for dignity and for a voice.   Everyone of these people feels passionately that Sheri and SWUAV deserve their day in court. I hope, having heard their story, the Supreme Court Justices feel that way as well.