Last week, Vancouver City Council passed a 2021 operating budget which allocated over $340 million to the Vancouver Police Department. In the lead-up to budget proceedings, many speakers appeared before City Council and spoke to the importance of defunding the police – as a matter of community safety and survival. Today, 14 community organizations and advocacy groups, including Pivot, are speaking out against the budget and elected officials’ failure to defund the VPD. We remind elected officials and policy-makers that the route to justice comes from investing in community-led safety initiatives and peer-led crisis response, rather than continued reliance of policing and criminalization. 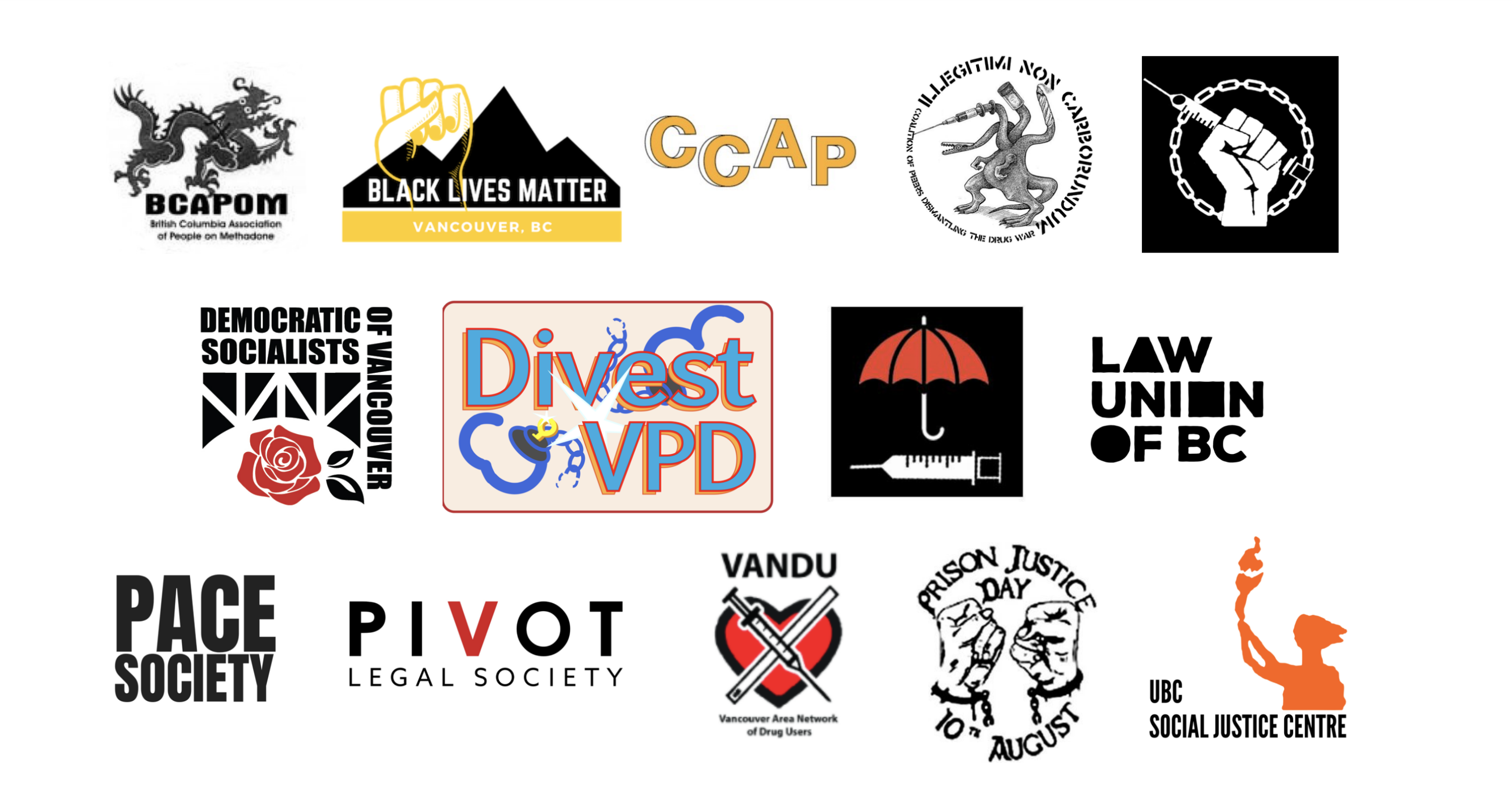 We, the undersigned, unequivocally condemn the City of Vancouver’s 2021 budget, which allocates over $340 million in expenditures to the Vancouver Police Department (“VPD”). We demand that City Council immediately undertake the work to build a vision of Vancouver without police and cut the VPD budget by 50% in 2022. We further call on the Vancouver Police Board to heed its obligation under the Police Act,[1]  to consider the priorities, goals, and objectives of the Council of the municipality, and develop an Operational Plan and Budget that commits to defunding, and a shift from enforcement and criminalization.

Earlier this week, Vancouver City Council approved over $340 million in police funding and rejected a motion calling for a budget cut of $5 million. The failure to decisively defund the police – by both Council and the Police Board – enables the VPD to continue a longstanding pattern of interference, degradation, and harm in over-policed communities. We struggle to understand the lack of impetus to respond to the calls to defund the police. We also know that these gaps and failings reflect the systemic classist and racist oppressions baked into our society, particularly anti-Black and anti-Indigenous racism.[2] Despite well-documented issues within the VPD, including specific recommendations put forth by the Office of the Police Complaint Commissioner[3], the VPD is not being held accountable as an institution.

This 2021 Operating Budget for the VPD does not accord with the lived experiences and demands made by communities who are under daily threat of police violence and intimidation. By approving this budget, we are being told that the voices, lived experiences, and expertise of people speaking out against policing and criminalization will not be considered by the municipal government. Instead, following months of engagement with the municipal government, advocates are met with a budget that maintains the dominion of police. City Council prides itself on unanimously approving the Motion Decriminalizing Poverty and Supporting Community-led Safety Initiatives,[4] yet this motion has not been met with commitment and ongoing material support for said initiatives.  We know that individuals, grassroots networks, healthcare, and social service providers continue to fill the gaps of failing municipal, provincial, and federal policies. Supporting community safety-led initiatives must start by funding the work that is already in place. A 50% cut to the VPD budget that is re-allocated to these hard-working community groups is imperative; folks currently being criminalized for poverty will be supported by service providers who know best.

Although City Council ultimately rejected the increased budget submitted by the Police Board, they have approved a 2021 Operating Budget of over $340 million. While this budget is a holdover of 2020 spending, the failure to cut the police budget and instead invest in communities reminds us that there is an ongoing disregard for the lives of people impacted by police violence – specifically Black and Indigenous community members; unsheltered residents of Vancouver; people who use drugs; people working in informal economies – in particular, sex workers; people experiencing mental distress; and people living in poverty. These communities continue to face police violence on a daily basis.

During budget hearings, Vancouver Mayor and Council heard from hundreds of speakers, many of whom related their own experiences of being victimized and brutalized by the Vancouver Police. Mayor and Council further heard many pleas to defund the police and invest in communities. Numerous speakers detailed the myriad ways in which the police fail to serve the needs of so many across this City. It is clear that frontline police are undertaking work they are ill-suited for - such as providing supplies to unsheltered people or cleanup of harm reduction supplies. Despite repeated public engagement throughout this year, including letter-writing, social media, and on-the-ground mobilization, Council failed to act, instead choosing to prioritize enforcement and criminalization as the dominant response to community concerns and systemic inequality.

Research in Vancouver and throughout BC has found that law enforcement practices, driven in part by ongoing gentrification efforts and reinforced by multiple forms of criminalization, limits access to services such as overdose prevention sites.[5],[6],[7] Despite police narratives about “perceptions of crime,”[8] law enforcement is not an adequate response to social crises. Police do not prevent or reduce crime. Police do not house people. Police do not help drug users to access safe supply or seek recovery. Police do not protect sex workers from violence. Police do not help individuals facing mental health challenges. Only communities do. Police cost our city more and more with each person criminalized or inducted into the carceral system.

The dearth of funding for peer- and community-led services has clear consequences, including fatalities, stigmatizing solutions,[9] or calls for service to law enforcement. Lack of appropriate housing, shelter, and drop-in spaces means that people who rely on public space must use public and private facilities to meet their needs - including substance use needs. The COVID pandemic has exacerbated existing deficits and forced many community spaces to close or severely limit people accessing services, meaning communities that rely on these services are left out on the streets and subject to further violence at the hands of the VPD. Workers in customer service positions, many of whom are precariously employed[10] (i.e. precarious, low wage earners, and/or migrant workers), regularly contend with social issues far beyond their job description. Without 24/7 access to peer- and community-led crisis response, these workers may be forced to respond to drug overdoses without adequate training or preparation. Calling for defunding of the police is not a call for diminishing safety, instead it’s a call to urgently redirect public funds to better-suited programming.

Consider that this year alone, there have been multiple, tragic deaths in bathrooms - highlighting the dire needs of people who rely on public space.[11],[12],[13] Time and time again, advocacy organizations, service providers, and peer groups call for services and support, yet inadequate and unpredictable funding for their work means that 911 is a catchall. The singular focus on funding law enforcement to first responders has resulted in a failure to invest in community initiatives.

The Police Board is an organization mandated to provide policy and general direction to the VPD[14], and such policies and direction must be attuned to the very real concerns that many stakeholders have expressed, regarding expanding police budgets, scope creep, and the inappropriate criminalization of marginalized and equity-seeking groups.

Throughout 2020, we have seen the Police Board fail to curb police power and spending. Examples of this include:

The conduct of the Police Board reveals an organization that is deeply enmeshed with the VPD and unable to act independently or provide governance that reflects dissenting views on policing.

We must build upon the important and thankless work that is already ongoing throughout Vancouver. This work exists despite and in spite of the efforts of police to criminalize the very existence of members of our communities. Our communities cannot thrive in the face of the ongoing harm from over-policing. If City Council continues without defunding police and reallocating resources to community measures, it means continuing to leave these communities without adequate protection. We implore you to think first of our neighbors that have been made vulnerable and choose support over harm.

BC Association of People on Methadone (BCAPOM)

Law Union of BC

[5] Alexandra B. Collins et al. "Policing Space in the Overdose Crisis: A Rapid Ethnographic Study of the Impact of Law Enforcement Practices on the Effectiveness of Overdose Prevention Sites" (2019). The International Journal of Drug Policy 73: 199-207.

[13] Independent Investigations Office of BC, “IIO is Seeking Witnesses to an Incident at a Tim Hortons on Terminal Avenue in Vancouver (2020-292),” (2020, December 1), online: IIO https://iiobc.ca/media/iio-is-seeking-witnesses-to-an-incident-at-a-tim-hortons-on-terminal-avenue-in-vancouver-2020-292/