Pivot's Brenda Belak with members of Sex Workers United Against Violence at the Women's Memorial March.

I’ve walked in the Women’s Memorial March most years since I moved back to Vancouver in 2003.

I’ve learned to anticipate a number of things: the drums and voices joined in the Woman Warrior Song as the crowd gathers at the intersection of Main and Hastings Streets; the smell of burning sage wafting from the medicine ceremonies at the sites where women were last seen; the cold that seeps through your clothes by mid-afternoon; the moment when someone spots the eagles soaring high overhead; the sombre determination in the voices and faces of the women activists who have been demanding justice for missing and murdered women in Vancouver for close to three decades.

For the first time, a national inquiry into murdered and missing Indigenous women is becoming a reality. Not only that, the federal government is actively soliciting input from women’s and community organizations, as well as loved ones of the missing and murdered, about how to make this inquiry work.

Over the weekend, I had two opportunities to contribute some input on the process. The first was as part of a coalition originally formed in opposition to the Missing Women Commission of Inquiry (MWCI). We met as a group with Indigenous Affairs Minister Carolyn Bennett on Saturday before this year’s March. This was the our second meeting with Minister Bennett during the pre-inquiry phase, an encouraging sign given the Minister’s clearly gruelling schedule. We provided our suggestions for making the inquiry process meaningful and effective, including a recommendation that the inquiry must be mandated to address issues arising from systemic gendered social and economic marginalization.

We also stressed to Minister Bennett that the pre-inquiry planning group should be reaching out to not only to families, but also to women’s groups and frontline organizations and survivors to elicit their knowledge and expertise. There is a need to devise specific mechanisms (and to secure funding) to ensure these groups’ and individuals’ participation in an inquiry. We hope this can create avenues through which we can introduce both substantive knowledge about violence against Indigenous women and lessons about how to facilitate participation learned from BC’s MWCI.

The second unexpected opportunity came during the March itself, when I found myself walking next to Justice Minister Jody Wilson-Raybould. I told the Minister that our clients, Sex Workers United Against Violence (SWUAV), were eager to meet with her to discuss their experiences and their perspectives on what should be done to keep Indigenous women — and Indigenous sex workers in particular — safer 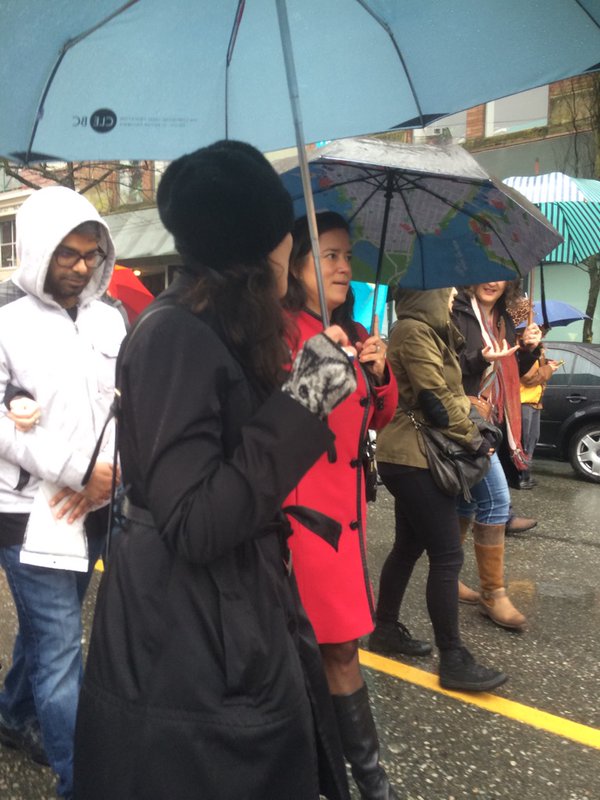 I invited her to come back to the Downtown Eastside to speak with them directly. She said she would be happy to do just that and that the government will be actively looking not only to consult, but also to collaboratively engage with those already working on these issues.

It was gratifying to be able to pass this on minutes later to SWUAV members, who were walking slightly ahead of me and who were positively elated.

Not all of Vancouver’s missing and murdered women were Indigenous, although a disproportionate number of them were; a third of the women who disappeared from the Downtown Eastside were Aboriginal, even though only 4% of southern BC’s population is Aboriginal. And certainly only a fraction of the more than 1,000 Indigenous women who have gone missing or been murdered in Canada over the past 30 years (or 4,000, according to the federal Liberals) have done sex work. But where the Venn diagram circles of these groups — Indigenous women and sex workers — overlap are some of the most vulnerable and socially marginalized people in Canada.

We cannot talk about safety without talking about sex work and how our laws operate to put Indigenous sex workers at risk, any more than we can deny the roles that government policies based in colonization and racism have played in creating poverty and violence.

Because of the criminalization and over-surveillance that Indigenous sex workers face under our sex work and drug laws, police are usually the last people they would look to for help. This is especially true when law enforcement works in tandem with a child welfare system that has replaced the residential schools as the state apparatus for seizing Indigenous children. The distancing of Indigenous sex workers from police institutionalizes their vulnerability. For the sake of every life at risk, we must change this reality.

As I look forward, I am hopeful that this national inquiry and upcoming reviews of our sex work laws, mandatory minimum sentences, and federal drug policies will create the space needed to hear from the people who often have not been heard before — Indigenous sex workers who live with this criminalization every day. And I hope by the time next year’s Women’s Memorial March comes around, we are witnessing changes to laws and policies, even as the Missing and Murdered Indigenous Women Inquiry unfolds.