Blueprint for an Inquiry: Learning from the Failures of the Missing Women Commission of Inquiry

From the perspective of the hundreds of marginalized women who protested the Missing Women Commission of Inquiry (“the Inquiry”) everymorning for the first month of hearings, the Inquiry was an absolute failure.  The Inquiry was set up to examine the problems arising from investigations of the disappearance and murder of dozens of women in Vancouver’s Downtown Eastside (“DTES”), and particularly the investigation of serial murderer Robert William Pickton. Out of the failures of the Inquiry, which are well documented and understood in the affected communities, the hope of the authors is that a positive legacy can still be uncovered. 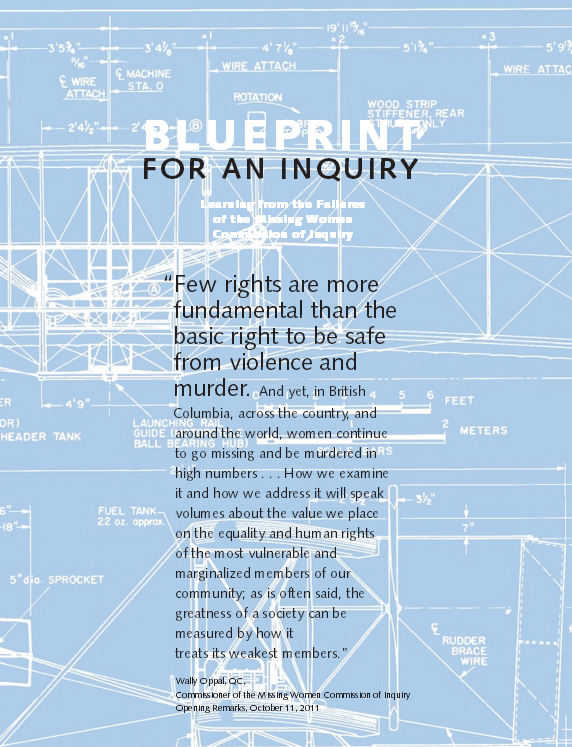 The report, written by experts in community legal processes from the B.C. Civil Liberties Association, Pivot Legal Society and West Coast LEAF, makes a number of recommendations that focus on ways Commissioners of inquiry can facilitate the participation of marginalized groups. The report also addresses basic procedural issues that dogged the MWCI, including full and transparent document disclosure, timely decisions on applications made by lawyers, and issues of conflict of interest. This report does not focus on the nuances of B.C. provincial law, but instead on broad trends and procedural approaches that future commissioners of inquiry and their staff may usefully adapt to the particularities of their own jurisdictions.