The corner on Broadway and Commercial where Shawn panhandles

Asking for Help Will Cost You

Shawn Cossaboom is a panhandler. Positioned to the north of the entrance to Safeway on Commercial and Broadway, he is a regular guy with a regular spot. He also has a philosophy: If you bother people or get in their way, they won't offer up a helping hand. The best way to panhandle is to do so in silence, with a sign, a book, and the company of a dog.

Shawn has always had a pretty good relationship with the employees who work at the Safeway. Over time he has gotten to know many of the customers as well. One woman usually gives him $20 every week, and it always makes a significant difference. Shawn starts his days early, heading to his spot from the homeless shelter on nearby Victoria Street, hoping to make enough money by mid-morning to get through the day.

But Shawn's routine changed drastically in the summer of 2012 when, for some unknown reason, members of the Vancouver Police Department took an interest in him. Despite no record of complaints on his file, and no instruction from Safeway to remove him from the property, they decided it would be in the public interest to try and shut Shawn down. Enforcement came quickly, and repeatedly. On July 23, 2012 a VPD officer, John Ward, approached Shawn and gave him a ticket for "obstructive solicitation." Shawn would get to know Cst. Ward's face well, as well as the other six officers who would ticket him over the coming months. Over a five-month period, Shawn was ticketed 20 times. On one occasion Cst. Interjit Waraich ticketed Shawn for obstructive solicitation, and when Shawn failed to reach up and grab the ticket from the Constable, he dropped it on the ground, and wrote Shawn another ticket for littering. In the months of September and October alone, Shawn was ticketed 15 times, averaging one ticket every four days. While the officers and time of enforcement often varied one thing remained the same, the assertion that Shawn was an "obstruction". 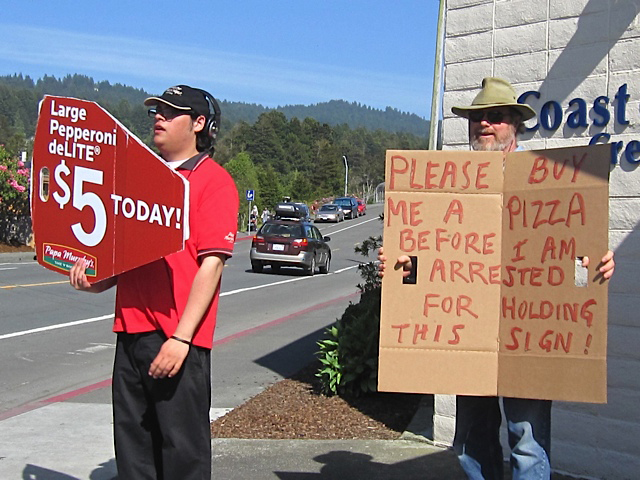 When Shawn's case was referred to us by the Kettle Friendship Society, we knew something was wrong. Not only was Shawn panhandling on private property, with the permission of the owner, but there seemed to be no reports of complaints. Shawn was adamant that he had never gotten in anyone's way while panhandling. Based on his word we took his case to trial, and challenged a number of the tickets he had been given.

In September of 2012, the same month that Shawn Cossaboom was given 9 tickets for obstructive solicitation, Richard Salzman of Arcata, California (above right, pictured) challenged a law making it illegal to hold a sign asking for money. In his ruling Judge Dale Reinholtsen declared it unconstitutional to “restrict solicitation merely because it makes people uncomfortable."

Court is never easy for anyone, and for Shawn it must have felt like he was on trial. Not necessarily for what he had done, but for who he was. Cst. Ward, who was responsible for almost half of Shawn's tickets, elected not to come. In his place Cst. Waraich, his partner, took the stand to testify as to why they had given Shawn so many tickets. There were details of where Shawn's sign was, how his belongings were placed, and observations made about how people walked by him. In the end, it was one simple question which tore open the case and got to the core of the issue: "What was the obstruction?". Constable Waraich conceded that the obstruction was not physical, it wasn't that Shawn had blocked anyone's way, but he believed people were obstructed by Shawn's presence alone. As Cst. Waraich left the stand the prosecutor acknowledged this was not what the law meant, and asked the Judge to acquit.

That one question, and answer, says a lot about how many of us view poverty in our city. It's existence offends us. We want it to be gone, but we don't have the means to fix it. Police officers feel the need to act, and dig into their toolbox to grab what they have been trained and told to use, in an effort to force the sight of poverty into remission. If the officers had taken the time to talk to Shawn about who he was, and why he was there, they probably would have seen him a lot differently. In his early 20's Shawn was diagnosed and treated for cancer. Countless drugs and surgery were able to beat the cancer back, but as many cancer survivors know, the effects of medical intervention can be significant and long-lasting. It wasn't just the cancer that left Shawn disabled - the drugs he was prescribed to manage the pain from that treatment left him addicted.

At Pivot we don't pretend to know all the answers, or to have all the solutions. Our hope is that as a society we will continue to move forward, and use the law as a tool to open doors and minds, not suppress the most vulnerable members of our society. It's why we advocate for harm reduction, more government resources for health and treatment options, and evidence over ideology. At the end of the day poverty has never left town because someone gave it a ticket.