The 1st anniversary of the VPD killing of Chester

Today, January 5, 2022, marks the 1st anniversary of the VPD killing of Chester.

Shortly after his murder, folks from VANDU, BCAPOM, and Pivot organized a vigil to mark the loss of a beloved community member. This year, Pivot is supporting members of the Defund 604 Network and VANDU, who are coming together to mark the first anniversary of his murder. 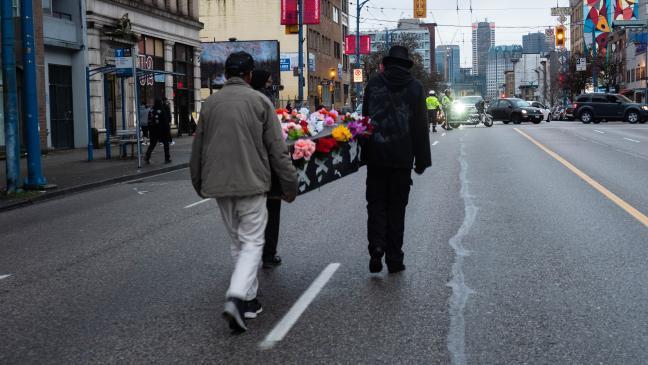 There is no formal and systemic mechanism of documenting and reporting police killings publicly in Canada. So, all numbers presented for police-involved deaths represent an undercount.

Chester’s death marked the first police-involved death of 2021 in Vancouver. There were 3 additional VPD-involved deaths last year, and 42 incidents of serious/ harm. Last year, across so-called Canada, 104 lives were taken by police – including those killed directly or due to police actions. As criminologist Jeff Shantz notes, “there is no formal and systemic mechanism of documenting and reporting police killings publicly in Canada. So, all numbers presented for police-involved deaths represent an undercount.”

Each of these incidents marks individuals, families, communities, and Indigenous Nations forever changed by a loss of life or irreversible event.

Chester lived in transitional housing in the Downtown Eastside. In the early hours of January 5, 2021, he was in a state of obvious – and prolonged – distress. The first call to 911 was made at 4:39 AM, and the IIO’s narrative report recounts that he expressed suicidal ideation. He was also holding an object, which the IIO reports was a sword.

Chester’s killing highlights the egregious harms that police are capable of, including when they attend calls relating to racialized people, people in distress, or people who use drugs.

When police arrived on site, 90 minutes later, he was shot 5 times. “The entire confrontation, from the time the subject officers exited their police vehicle to the shooting, took no more than five to six seconds.” The IIO report further notes that no officer was equipped with a “less lethal” option. After being shot, his lifeless body was handcuffed and then transported to hospital where he was declared deceased. While the IIO investigation found no fault and determined that neither officer committed an offense, Chester’s killing highlights the egregious harms that police are capable of, including when they attend calls relating to racialized people, people in distress, or people who use drugs.

READ: ‘There Has to be a Better Way’: Police Kill a Sword-Wielding Man in the Downtown Eastside, Jen St Denis | The Tyee

Everyday folks in our community are organizing and co-creating a world that doesn’t rely on the violence of policing. We see it in peer-led safe supply initiatives, in developing alternatives to police-led wellness checks, and in recognition that Indigenous and Black people are disproportionately harmed and killed by police. Defunding the police could divert critical funds towards non-violent interventions – saving lives.

READ: Defunding the VPD is an investment in public safety and collective well-being, Chuka Ejeckam

Today, alongside organizers in the Downtown Eastside, we remember Chester.