Drug prohibition has failed unequivocally. Decades of state negligence have resulted in catastrophic deaths and escalating health harms across Canada. Governments at every level must act immediately. No more finger-pointing. No more empty promises. The War on Drugs must end.

The War on Drugs
must end.

Amid dual public health emergencies and global movements calling attention to anti-Black and anti-Indigenous police violence, calls for drug decriminalization are mounting. Removing penalties and sanctions from the act of simple possession is an urgently needed response to the stigma and death that prohibition means for people who use drugs, and in particular, those who are poor and racialized.

Last week, Pivot released Act Now! Decriminalizing Drugs in Vancouver, a report highlighting the ability of all non-federal governments (including the City of Vancouver and the Province of B.C.) to decriminalize drug possession at the local level. Examining the harms of prohibition and the debate between partial (i.e. Portugal Model) and full decriminalization, the report echoes calls from global drug-user led movements: We want full decriminalization now—no penalties, no sanctions. 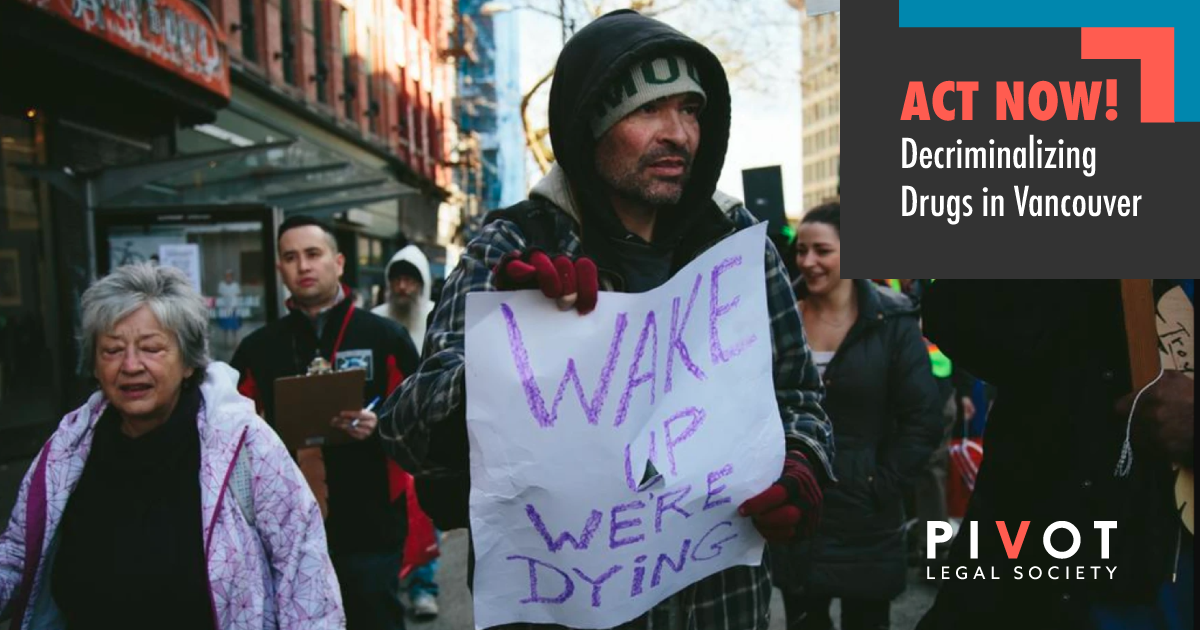 The recommendation contained in Act Now! is simple:

Cities and provinces alike should request exemptions from the federal government that would protect all people in their jurisdiction against enforcement of simple possession crimes under the Controlled Drugs and Substances Act.

Local decriminalization is critical to face the dual crises of a toxic drug supply and COVID-19—especially in the face of sustained federal inaction. We’ve seen endless calls to action from provincial and municipal governments, task force after task force, and motions that lead nowhere. At the same time, police forces (including the Vancouver Police Department), publicly claim to have deprioritized the enforcement of drug possession, all the while pursuing drug seizures, hassling people who use drugs, and obstructing vital overdose prevention services and peer networks. Continued police discretion is not the answer if we want real change.

In addition to curbing needless overdose deaths, decriminalization at the local level will shift the national dialogue and could propel federal reforms. We have to start somewhere, and exemptions have already been used to sanction “zones” all over Canada, allowing people to safely access harm reduction services such as supervised consumption sites. We can and should seek these same exemptions on a City- and Province-wide basis—not as a “silver bullet”, but as one critical tool to stem the tide of overdose deaths and to complement ongoing initiatives like safe supply.

Pivot is grateful to people who use drugs for leading all crucial drug policy action in Canada. This report in particular benefitted from the foundational work of the International Network of People who Use Drugs and the Vancouver Area Network of Drug Users.