On January 22, 2020, Quebec sex worker Marylène Levesque was found murdered by Eustachio Gallese who was out on parole. Gallese was convicted in 2006 of the violent 2004 murder of his then-partner, Chantal Deschênes, and sentenced to life in prison with no chance of parole for 15 years. In 2007, Gallese was found to be a high risk for re-offending by the parole board but this was lowered to moderate and then low in 2019, when he was granted supervised release on day parole at a halfway house.

Disturbed after hearing that Gallese was pursuing relationships with women, the parole board in March 2019, instructed Gallese that he could pursue relations with women that the board considered to be appropriate, in this case, approving him to seek the services of sex workers to ‘satisfy his sexual needs.’

The parole board considered Gallese to be dangerous to women but somehow, not too dangerous for sex working women.

By doing so, the parole board made the perverse decision to permit him to engage in criminalized behaviour – purchasing sexual services – something that would normally cause a revocation of parole status. Not only did this decision go against Bill C-36, Canada’s sex work legislation which sex workers have always said puts them in more danger, it also means that the parole board considered Gallese to be dangerous to women but somehow, not too dangerous for sex working women. It begs the question of how many other dangerous parolees are permitted to see sex workers, all the while as Bill C-36 continues to criminalize aspects of sex work resulting in even less safe working conditions for sex workers. The murderer’s ‘sexual needs’ took priority over sex workers’ safety. This reflects the extraordinary stigma of sex work – that sex workers are not deemed to be important enough to protect and that the violence that happens to them is seen as normal.

Gallese made several visits to a massage parlour where Marylène worked until he was banned by management for being violent to other workers there. The massage parlour could not report this violence to police as safer indoor workplaces for sex workers, such as this one, are currently criminalized by Canada’s scheme of sex work laws. Were they to report violence to police, the business would be shut down, the owners and managers would have been arrested, and the sex workers who worked there would be out of a job. Thus, Gallese’s parole officer and police remained unaware of his dangerous behaviour which clearly indicated that he was still a high risk to re-offend.

On January 23 2020, Gallese turned himself into authorities and admitted to murdering 22-year-old Marylène Levesque in a Montreal hotel room. 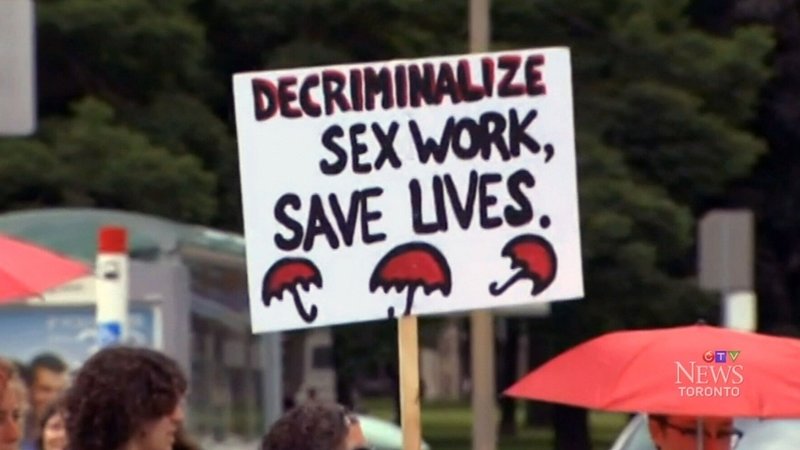 Marylène Levesque’s death is a consequence of criminalizing  sex workers and the stigma surrounding sex work. Levesque and sex workers like her are seen as appropriate outlets for male violence precisely because they are sex workers. It is beyond belief that a man with a history of violence towards women would be encouraged to seek the services of sex workers by the Parole Board. Sex work law prevents safer indoor workplaces to fully engage in safety-enhancing activities such as calling on police when perpetrators become violent. In the wake of Levesque’s death, when NDP MP Laurel Collins echoed sex workers’ calls for decriminalizing sex work, this stigma could be seen in Parliament when Conservative MP Arnold Viersen asked her if sex work was “an area of work that she has considered” as if sex work was something no respectable woman would choose to engage in.

Marylène Levesque’s death is a consequence of criminalizing sex workers and the stigma surrounding sex work.

It is important that there has been a lot of coverage and support for Marylène following her death. Her death should have been preventable and she should have been able to work in her chosen field with the safety and dignity that all workers deserve. We also take this moment to recognize the lives of racialized, trans, poor, and disabled sex workers taken by these issues of criminalization and stigma, compounded by their experience of other systems of oppression, who have not gotten the attention and public outrage they deserve.

Sex workers have long warned that current prostitution laws in Canada put them in harm’s way and contribute to the stigma surrounding sex work. The decision by the Parole Board starkly reflects this stigma by viewing sex workers as less than human and not deserving of being included in considerations of ‘public safety.’ A Conservative motion for the House public safety committee to examine the Parole Board of Canada’s decision to grant day parole in this case was passed unanimously by the House of Commons on February 5, 2020. It remains to be seen whether the role of the law will be discussed at all. A five year review of the laws was supposed to begin in December 2019 but to date, no plans have been announced.

When will sex workers’ lives begin to matter?