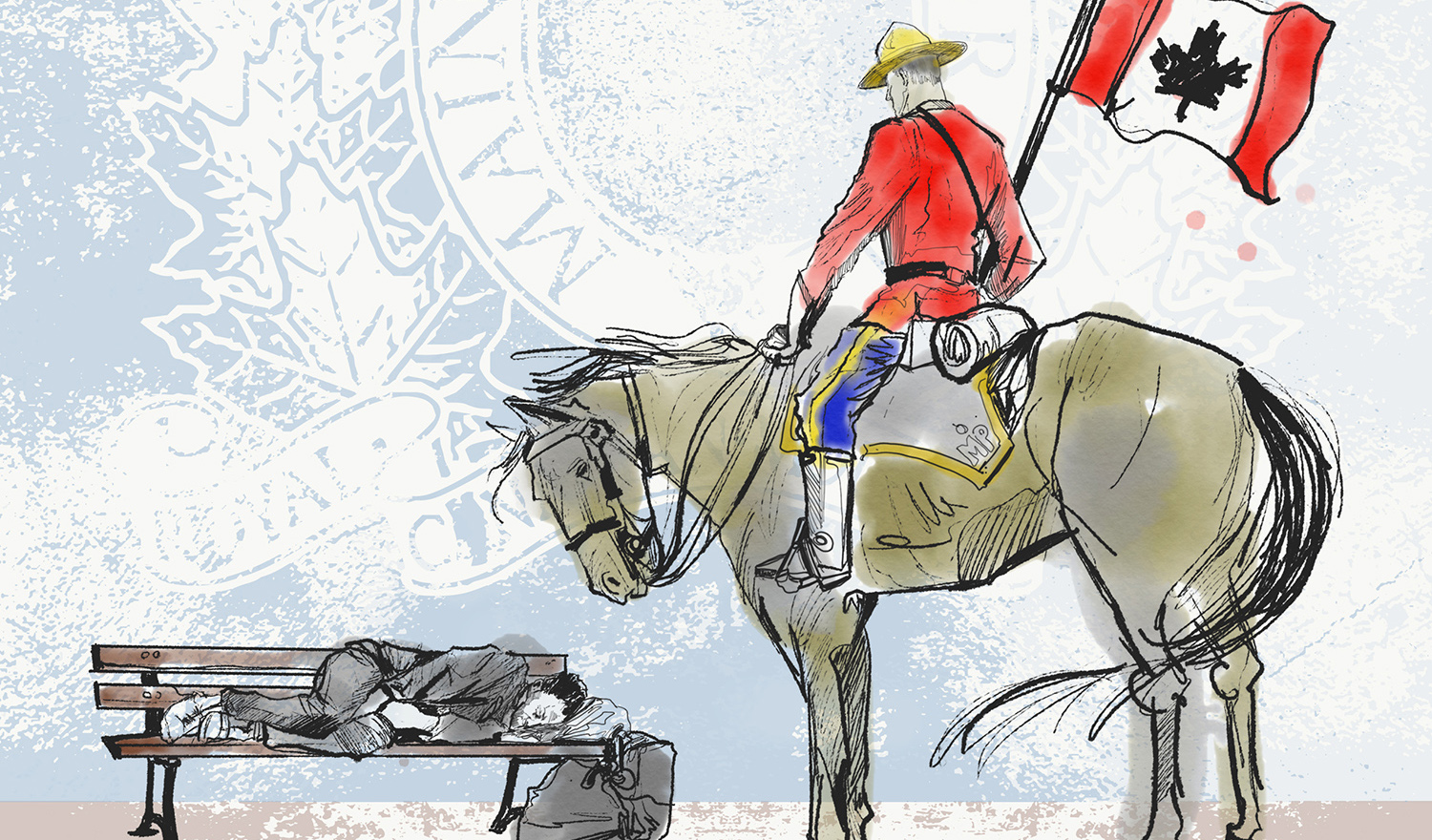 Regardless of demographics or regions, both the police, as an institution, and policing, as a set of practices, were top of mind for Project Inclusion participants. Reaction to engagement with police ranged from exhaustion from constant experiences of displacement, to anger as a result of a lifetime of harassment, to absolute fear. Indigenous participants living in deep poverty, particularly those who live in public space or consume alcohol in public, are especially targeted by police.

One participant who was experiencing a very high level of interaction with police in her small RCMP community summed up the sentiment of many marginalized people who spoke with us: “Just about five days ago, they came to our camp and they called [name] a 'worthy target' (181),” she said. “And he was like, ‘How am I a worthy target? I live in a fucking tent.’”

Policing practices are not creating safety for people experiencing homelessness, people who use substances, people scraping by in the grey economy, or the broader communities in which they live. Especially concerning in the context of an unprecedented opioid crisis is that participants across BC described police disrupting harm reduction activities and contributing to higher risk substance use practices.

We learned that in several communities, harm reduction supplies provided by health authorities and local service providers are being seized or destroyed by police.

In some communities, people who use drugs now have access to Overdose Prevention Sites (OPSs) where they are able to consume illicit substances without fear of arrest in the presence of people trained to provide rapid overdose intervention. The success of the OPS model in saving lives is undeniable. Yet, heavy police presence in the vicinity of these sites can, and does, make people reluctant to use these life-saving services.

In one RCMP community, we had the opportunity to witness the impact of over-policing outside the OPS firsthand. The site in this community is only open a few hours each day. One afternoon, we watched police parked in front of the site slowly search a car that appeared to be someone’s home for over an hour. In that time, we saw several people come around the corner toward the site, see the police, and turn and walk away. We also watched one woman leave the site in a state of extreme distress because she saw the police outside and was fearful that they were there for her.

In cases where a person experiences an overdose, especially outside of an OPS or supervised consumption site, it is imperative that people feel that they can call 911 to get help. The Good Samaritan Drug Overdose Act (GSDOA), which became law in May 2017, offers some legal protection for people who find themselves at the scene of an overdose when emergency help arrives, including the caller, the person who overdosed, and any other bystanders. While the GSDOA provides immunity against charges of simple possession and breaches of conditions where the underlying offense is simple possession, it does not protect against outstanding warrants or against charges and breaches related to other offenses.

Project Inclusion interviews began two months before the GSDOA became law and concluded five months after it was enacted, so it is too soon to determine its full impact. However, there is evidence to suggest that the GSDOA is either misunderstood by police, or that police are deliberately applying it in a way that undermines its intended public health purpose.

In BC, over 2,440 people died of overdoses in 2016 and 2017 alone. BC’s Director of Police Services needs to take immediate steps to develop a Provincial Policy on harm reduction that includes a directive to deprioritize simple possession of controlled substances. The Director of Police Services must also develop a Provincial Policy on police attendance at overdoses, which includes a clear statement that the role of law enforcement at the scene of a drug overdose is to deliver first aid if they are the only responders available, or to protect the safety of Emergency Health Services and members of the public, not to investigate the individuals or circumstances at the scene unless police determine that there is an urgent public safety concern, for example, if violence is occurring at the scene.

In the end, criminalization and harm reduction are incompatible approaches to addressing a complex issue. As long as the possession of certain substances is illegal and there are no legal avenues for securing those substances, people who took part in this study will continue to face unnecessary risks to their health as a result of a toxic, unregulated supply, and the threat of criminal sanctions.

To find out more about Project Inclusion participants’ experiences and perspectives on policing read "The Impacts of Police and Policing" or download the full report.