First off, a big thank you to the countless people who emailed, tweeted and showed up in person to fight a move by three Park Board commissioners to shut down warming shelters for the homeless – effectively locking them out in freezing temperatures.

A special Vancouver Park Board meeting was called last Thursday to consider an ill-conceived motion predicated on fear – or, in the words of the NPA commissioners, “concerns” – on a night when temperatures were expected to dip to minus six degrees. It defied reason. 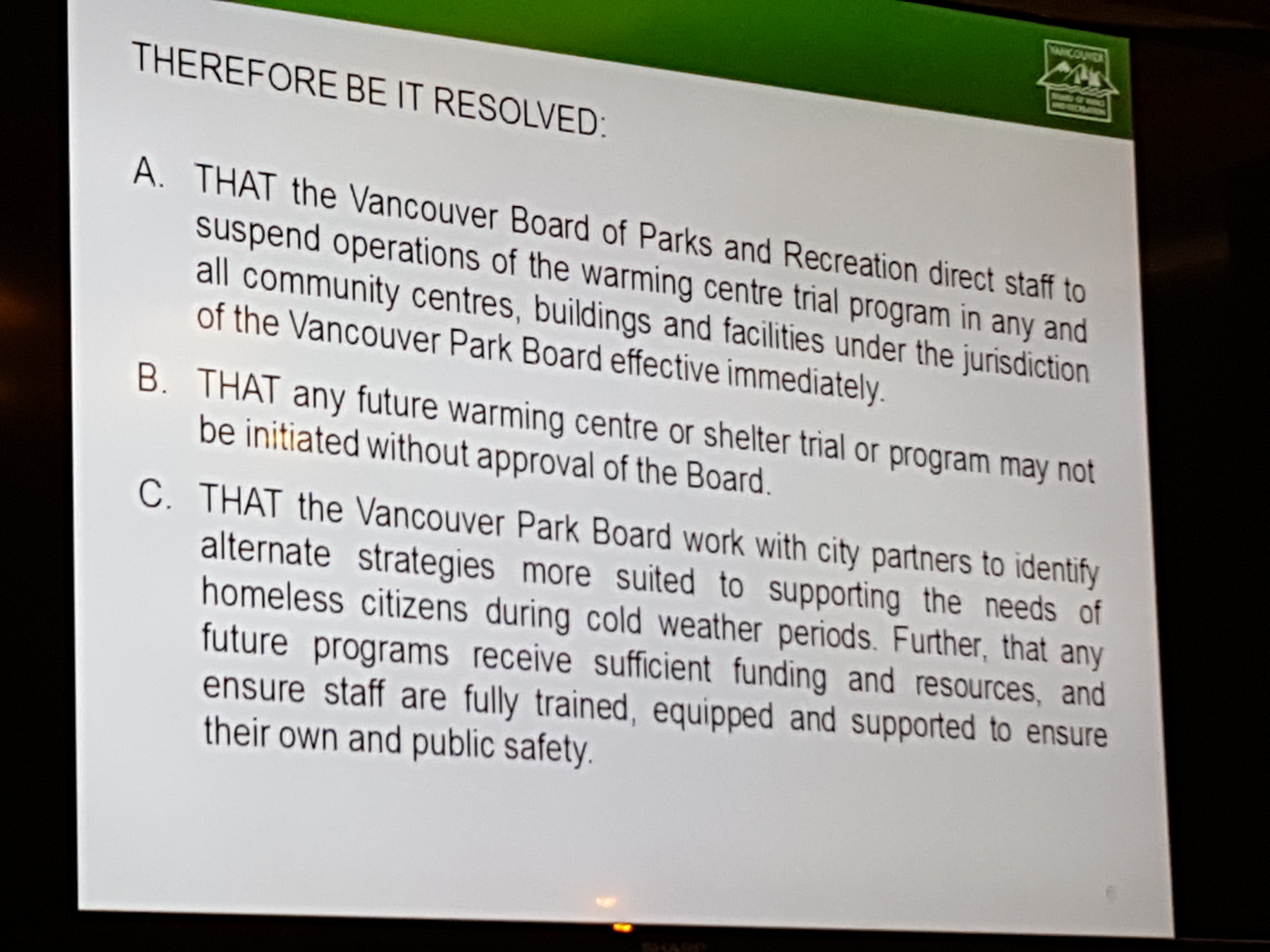 “The intent to close community centres and give no possibility for them to open again while it’s still cold is sending people back to the street,” said Spencer Chandra Herbert, a former Park Board commissioner who spoke at the meeting to protest the plan.

“Homeless people are people too. They are citizens, they are neighours, they are community centre users."

As I sat in on the discussion I couldn’t believe what I was witnessing: six commissioners debating the merits of keeping warming shelters open from the comfort of their cozy, Wi-Fi enabled chamber while the homeless huddled together on frigid streets trying to literally stay alive.

There have been almost 2000 visits to warming shelters since they first opened in mid-December. These converted community centres have been filling gaps in service that are symptomatic of chronic underfunding and government apathy.

Recent reports of used hypodermic needles and unruly behavior at some centres have stoked irrational fears leading to heavy-handed attempts to further marginalize the homeless. Such reports point to a need for better staff training and more resources rather than a reason to deny another human being the dignity of a warm, dry place to rest.

Thankfully three members of the Board exercised enough common sense and human decency to toss this motion where it belonged – the garbage. Board chair Michael Wiebe and commissioners Erin Shum and Stuart MacKinnon voted it down, and their leadership and compassion likely saved lives.

They deserve credit, but so do the supporters who wrote in online or called the Park Board to voice their disgust, the only fitting emotion one could reasonably arrive at given what was proposed.

All day my smartphone was buzzing with notifications of supportive retweets and mentions from people who had shared our concern. Below is the response many of you received. 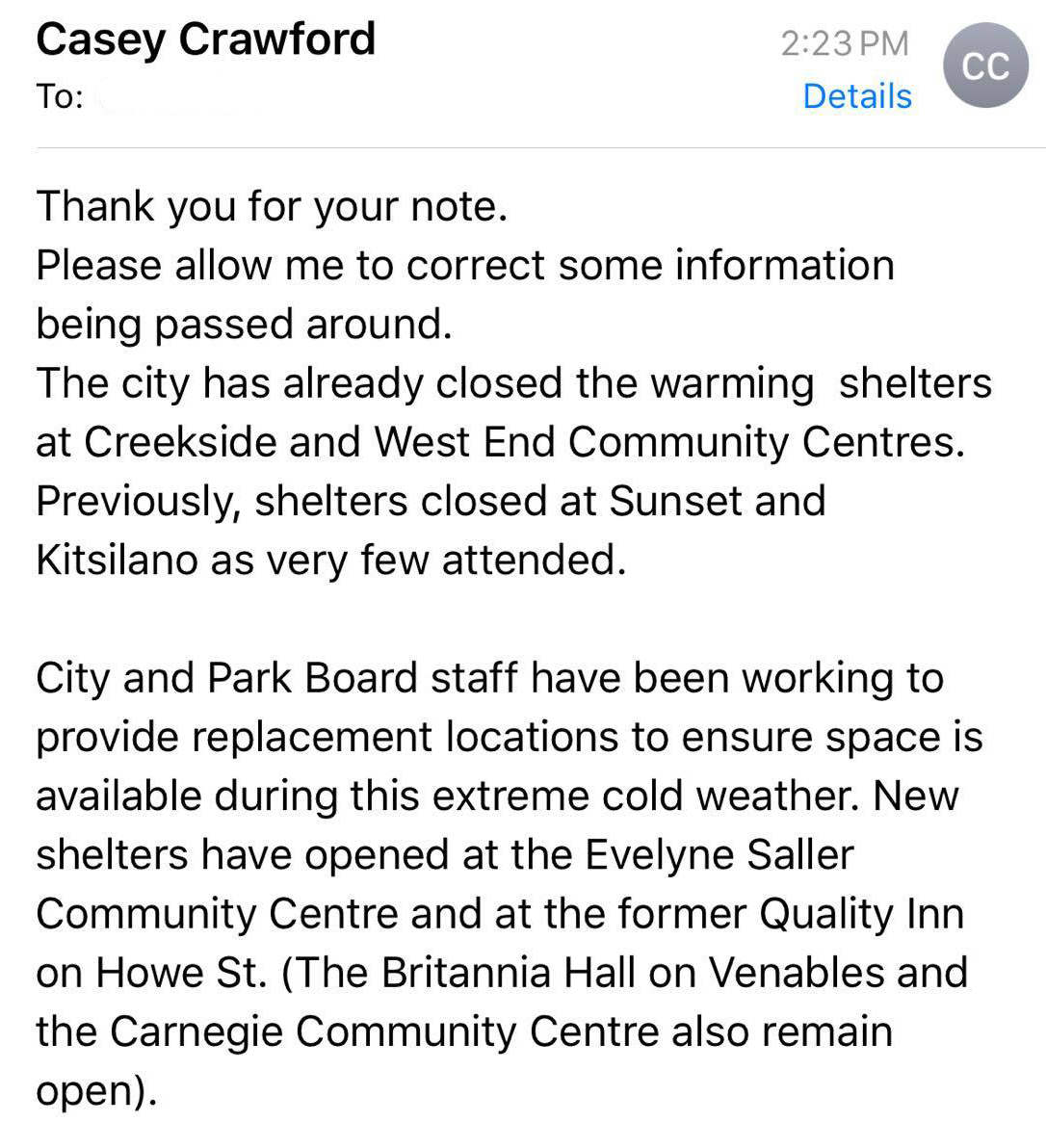 Chair Wiebe referenced your emails at the meeting and I know they had an impact. Thank you for sending them.

Thank you also to the many people who showed up Thursday night to challenge commissioners in person. Emails can be dismissed, but a plea from someone standing five feet away cannot – though you wouldn’t know it by some of the body language (names withheld, but here's the livestream archive).

City staff and volunteers who formed the backbone of this ad hoc emergency measure also deserve recognition. Many cared for the vulnerable and sick while lacking proper resources and training to do the job. A former chair of the board recognized their efforts Thursday night as he admonished the commissioners for even contemplating a horrible motion that could have killed.

Aaron Jasper argued that saving lives should supersede “process” when emergencies arise. And the Lower Mainland’s bitter cold, which caused a lake to freeze solid enough to skate on for the first time in 20 years, certainly qualified.

“Understand that when you’re talking about shutting down warming shelters you’re putting the lives of my friends at risk,” said Jessica Hannon, Executive Director of Megaphone Magazine.

“We’re in a homelessness crisis and an opioid crisis. We need to work together to seek solutions rather than fear monger which is what this motion is doing.”

Karen Cooper, a grandmother and community centre user, also addressed the board. “I want to be able to say to my grandchildren that the city of which I’m very proud made a choice to take care of the most vulnerable in our community. And we didn’t’ choose to kick them out in minus five degree weather,” she said. 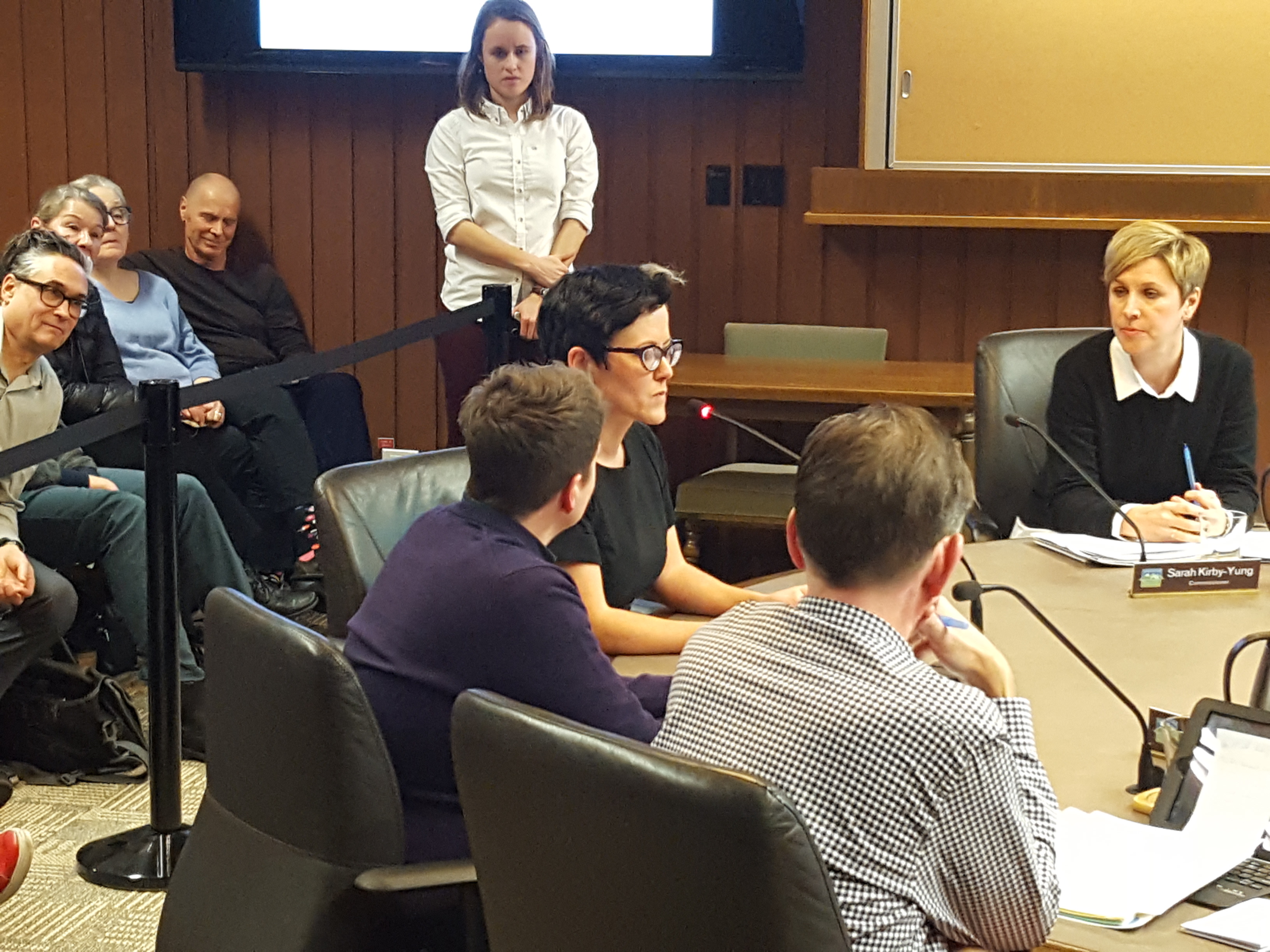 Pivot lawyer DJ Larkin was also there, not to give her opinion, but to lay down the law.

“We are concerned that the Board is failing to accommodate disability to the point of undue hardship in the provision of a service to the public. That includes addiction,” she said.

“The board may be making a decision primarily on the basis of stigma and fear, rather than evidence. [Doing so] opens this Board up to judicial review and to potential litigation in relation to your human rights obligations.”

In the end, it didn’t need to come to that. But Thursday night’s victory was a small one pointing to a much larger problem: the lack of affordable, supportive housing for the city’s most vulnerable. Hopefully this is a wake-up call for other levels of government that can now see the difficult choices their chronic underfunding forces upon cities.

But Thursday night’s win, at least, was a chance to chalk one up for the good guys. It felt good, and those of you who stood up for homeless members of our community deserve the credit. Thank you.