It is time for Parliament to reform Canada’s laws on sex work.

The Criminal Code provisions introduced by the Protection of Communities and Exploited Persons Act (PCEPA) are unconstitutional and should be repealed.

This report, "Evaluating Canada's Sex Work Laws: The Case for Repeal," provides a history of the litigation that struck down previous laws and the approach taken in drafting the PCEPA. It gives an overview of the impacts that the PCEPA is having on sex workers across Canada and why the law is unconstitutional. Finally, it draws from advocacy by sex workers to make key recommendations for creating laws that respect and promote the human rights of sex workers.

The PCEPA has been mischaracterized as targeting only those who harm or exploit sex workers, without criminalizing sex workers and others who may enhance their safety. Analysis of the Criminal Code provisions in the PCEPA shows that the legislation has resulted in sweeping criminalization of the sex industry, threatening the physical and economic security of sex workers, even though they are immunized from prosecution in certain circumstances.

The PCEPA violates sex workers’ rights to freedom of expression and association, security of the person, and equal treatment under the law.

Despite the PCEPA’s avowed aim of protecting vulnerable people from exploitation, bans on purchasing sex, communicating for the purposes of selling or purchasing sex, working collectively, and advertising sexual services replicate many of the dire consequences for sex workers’ health and safety identified in Bedford. There is little doubt that the PCEPA is unconstitutional and actively prevents people who sell or trade sexual services from exercising their fundamental Charter rights. 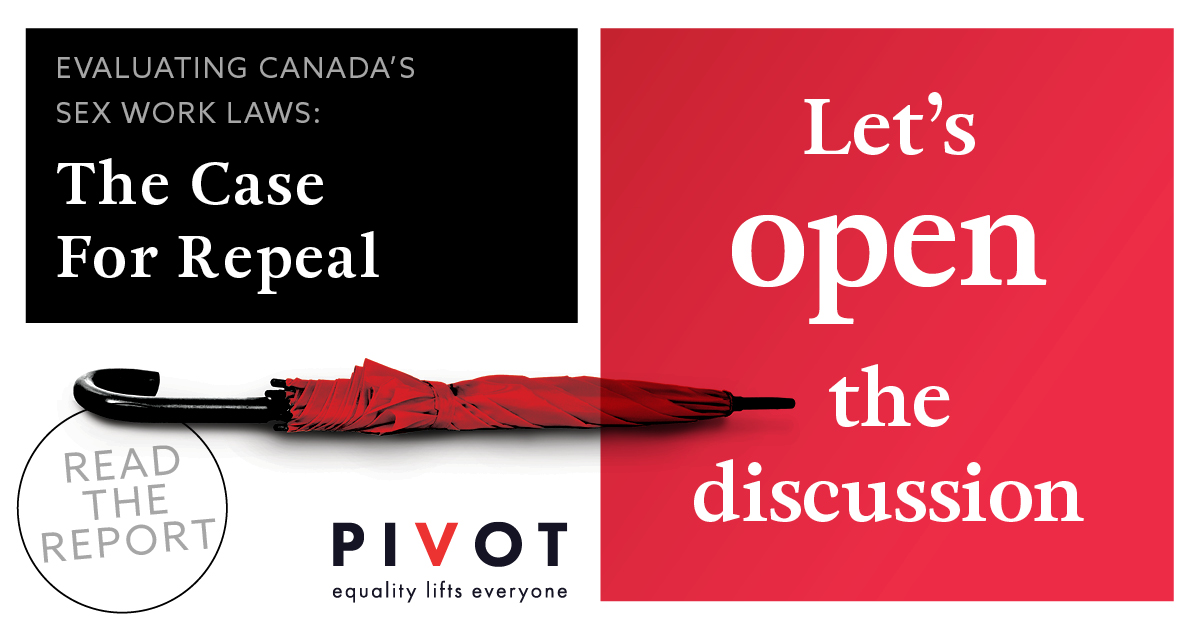 How Do Laws Endanger Sex Workers?

Although it is estimated that less than 20% of all sex workers in Canada work outdoors, because of their visibility, street-based sex workers have consistently borne the brunt of enforcement efforts. The vast majority of criminal charges laid to date – estimated to comprise 90% of the total sex work-related charges since 1980 – have involved communicating in public, meaning that criminalization has disproportionately impacted sex workers who worked on the street. After the communicating law was enacted in 1985 to reduce “nuisance”, the number of missing and murdered sex workers in Canada rose dramatically.

In Bedford, the SCC identified client screening as one of the most important tools available to sex workers to protect their safety and health and found that the law prevented street-based sex workers from using screening techniques. For street-based sex workers, these include, among other things, referring to “bad date sheets” that provide descriptions of predators and their vehicles, assessing the client’s sobriety, negotiating terms such as the services to be offered and the use of condoms, and scanning the interior of a vehicle to ensure that door handles are in place and that nothing is hidden in the back seat. If communication with clients is illegal, sex workers are rushed to get out of public view quickly and do not have time for screening. The likelihood of detection and arrest was found to increase with the amount of time spent on the street before getting into a car.

For indoor workers, screening can include requiring that clients provide names, references, and verifiable call back numbers, and that they call from unblocked numbers. Sex workers may correspond with clients through email, meet them first in a public place, or use web cameras to chat with and visually assess clients before meeting in person. Commercial sex work businesses similarly may require different types of client information, including credit cards and call back numbers, before booking appointments. Premises with a front desk provide an opportunity to assess clients in person before they meet with sex workers.

Regardless of its legal status, there will always be people who do sex work because it is a relatively low-barrier option that offers flexibility in terms of hours and higher remuneration relative to other jobs.

Laws prohibiting the exchange of sex for compensation between consenting adults are not the way to end endemic violence against women or to address inequality and systemic poverty. Instead, we urge lawmakers and police to work with sex workers to take the following steps to create a safer sex industry:

Even before the Bedford decision and the release of the findings from the Missing Women Commission of Inquiry, the Vancouver Police Department (VPD) embarked on a process together with sex worker and community organizations, including WISH, PACE, and Pivot, to draft new guidelines for how to enforce sex work laws. The Sex Work Enforcement Guidelines were released in 2013.

They explain that the dignity and safety of sex workers is a VPD priority; enforcement of the law in instances of sex between consenting adults is not. The Guidelines set out that VPD officers will use their discretion to focus on enforcing the laws primarily in cases where there are reports of violence, exploitation, or involvement of underage persons or organized crime. The Guidelines are assisting police to build trusting relationships with sex workers and community organizations and could serve as a model for police forces in other areas of the country. 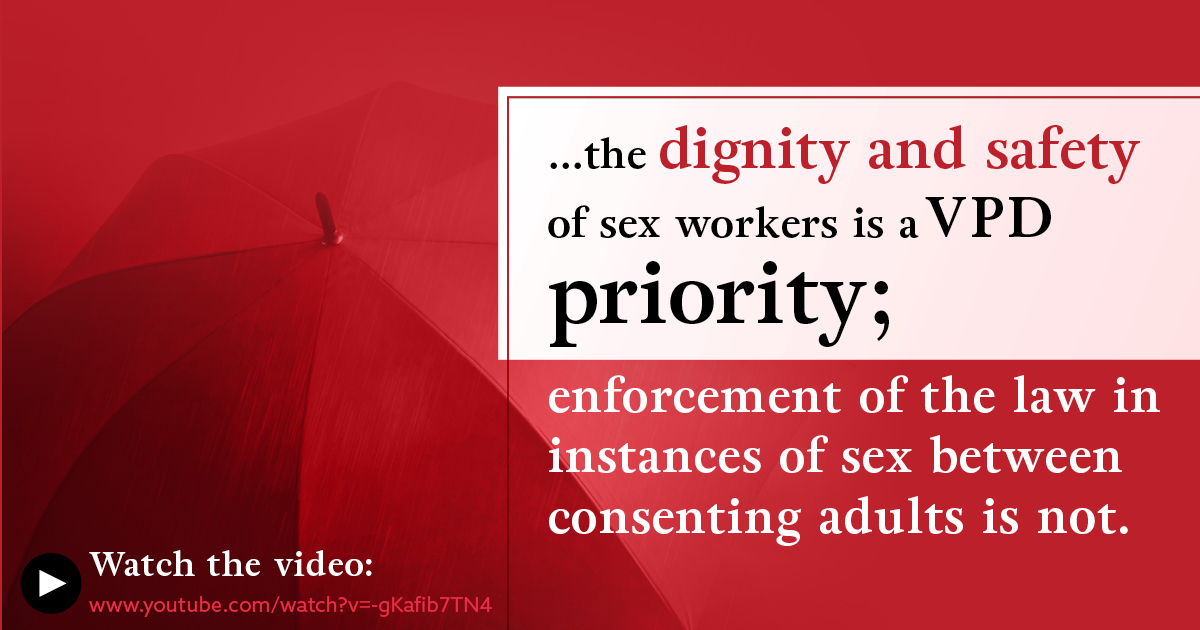 Does Criminalizing Clients Reduce the Number of Sex Workers?

The claim by proponents of the Nordic model that asymmetrical criminalization reduces demand for sexual services and therefore reduces the number of women doing sex work is a matter of debate. Securing reliable statistics on the make-up of a group of people who are often mobile and dispersed and who are highly stigmatized and fearful of authority is difficult. Criminalization itself, whether of sellers, buyers, third parties or all three, complicates attempts to get a clear picture of sex industry demographics. As a result, reliable data is scarce.

In Norway, immediately prior to the introduction of the ban on buying sex, the Norwegian government commissioned a detailed study carried out by the Institute for Labour and Social Research (Fafo). Fafo estimated in 2008 that around 3,000 people sold sex annually, with just under half (45%) operating from the street.

In 2014, the Norwegian government commissioned Vista Analysis to evaluate figures after the purchasing ban, but without the same comprehensive mapping Fafo had employed. The study used projections to arrive at a mean of 2,482 people selling sex in 2014, a potential reduction of 20 to 25%. Vista estimated that 1,517 sex workers (61%) operated in indoor locations, while 965 (37%) were street-based. These findings have been questioned by academics and social service providers working in the field, with some suggesting that the apparent reduction is simply a result of reduced visibility. Technological advances have changed how and where sex is sold in Norway and around the world. Evidence from Sweden also suggests that an immediate decrease in street-based sex work there was followed by increased indoor sex work, in part as a result of the growth of internet communications.

The eradication of sex work has yet to be achieved in any of the countries using asymmetrical criminalization. Unsubstantiated benefits of decreased demand need to be carefully weighed against real, documented harms experienced by current sex workers.

A number of the Norwegian social service providers interviewed by Amnesty International suggested that the purchasing ban had discouraged some men from buying sex, resulting in the emergence of a “buyer’s market.” Prices for sexual services in Norway are reportedly lower than before the ban on purchasing. Norwegian social service providers have expressed concerns that “customers can to a greater extent set the agenda for which sexual services they want to buy, price, place for performing the sex act and use of condoms. This results in greater vulnerability for sex workers.” This trend was predicted by the authors of the 2008 Fafo baseline study, who anticipated that risk-reduction strategies would become more difficult for sex workers to implement if the customer base was weakened.

By contrast, New Zealand, which decriminalized sex work in 2003, did not see any significant increase or decrease in the number of sex workers as a result of decriminalization, according to a government review undertaken five years after the Prostitution Reform Act, 2003 (PRA) was passed. The committee mandated under the law to conduct the review reported in 2008 that, despite slower progress in eliminating exploitative employment conditions, On the whole, the PRA has been effective in achieving its purpose, and the Committee is confident that the vast majority of people involved in the sex industry are better off under the PRA than they were previously.

Not All Sex Workers Are Women

Selling sex may resonate differently or have different significance outside of the cisgender, heterosexual framework often presumed in discussions of sex work. For people who are queer, transgender or gender non-binary or non-conforming, sex work may be both a form of income and a way of exploring their gender identity and sexuality and experiencing others’ appreciation for them, sometimes for the first time.76 Sex work may also be more culturally accepted and prevalent in these communities. Recent research conducted in Vancouver found that at least one sixth and up to 25% of interviewees, all self-identified MSM, had sold sex at some time during their lifetimes.

Acknowledging and exploring the experiences of people selling or trading sex who are not cisgender women may help to expand our understanding of sex work and undo the perception that it is inherently a form of gender exploitation.

Pivot and PACE written submission on the review of PCEPA