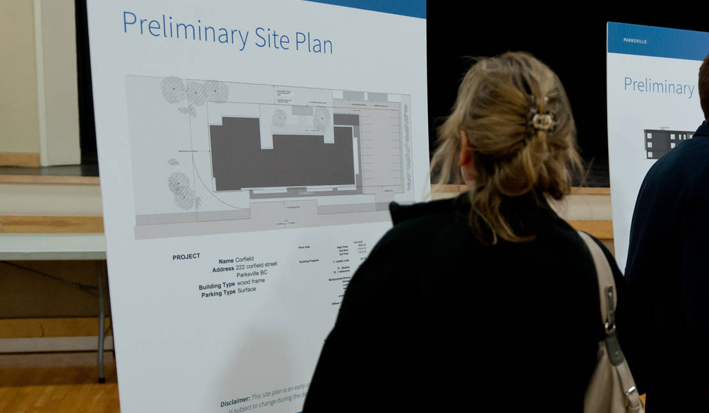 In many municipalities where potentially life-saving projects have been proposed, vocal groups of housed residents have organized to throw up roadblocks. Often, this means using local zoning processes to suggest that people experiencing homelessness don’t belong in their community or to seek special, restrictive controls on housing for people who are currently homeless. There have been aggressive demonstrations and even intimidation at public hearings. In Nanaimo and Maple Ridge, councils have capitulated to the will of angry residents by backing down from rezoning projects that would have sheltered vulnerable communities.

However, it is not all bad news. Recent events in Parksville, BC, are illustrative of how legal tools can support progress in the face of community opposition. In early June, Pivot was contacted by service providers in Parksville on Vancouver Island. BC Housing had agreed to build 52 units of supportive housing at 222 Corfield South, just south of Parksville Community Park, for those at high risk of homelessness, seniors, and people with disabilities. The Island Crisis Care Society, which runs existing shelters in the mid-Island area, would provide 24/7 staffing. The supports planned for the housing included life and employment skills training, health services, and the project would also include space for a cold weather shelter from November to March.

Almost immediately, opponents mobilized, creating a website, organizing an independent open house, and collecting signatures on a petition. This project, with the potential to save lives and bring people out of the cold, sharply divided the community. City Council meetings became fraught with conflict, while service providers and people who publicly stood in solidarity with those experiencing homelessness told us they felt threatened, harassed, and that their voices were unwelcome.

As the City began the process required to rezone the property where the project would be located, staff received a flood of feedback: 416 submissions in favour of rezoning, and 2,058 opposed. The submissions opposing the project echoed what have now become familiar refrains: wrong location, the proximity to downtown, and the perceived impact on neighbourhood safety. Some opponents were well-heeled developers who feared the project would imperil their profits as they sought to build a retirement complex nearby.

Many appeared to second guess the research pointing out the effectiveness of Housing First principles, favouring instead a failed prohibitionist approach requiring people experiencing homelessness to stop using susbtances as a precondition to being housed. Some went further, calling the proposal a “shooting gallery” that would enable “addicts”,  or said the housing project would open Parksville to “undesirables” and that Parksville already had “far too many druggies”.

As Pivot has repeatedly argued, remarks of this nature are, in and of themselves, discriminatory and beget more prejudice. That, in turn, informs how politicians make decisions that have significant health and safety implications. These type of statements also undermine the dignity of people who use substances and everyone experiencing homelessness. Human rights codes across Canada recognize addiction as a disability, and it is prohibited to discriminate on this ground.

Pivot wrote a letter to the mayor and council outlining our concerns. We laid out the importance of properly conducted public hearings, and explained the job of the mayor to ensure that they were free from discrimination. We pointed out that none of us get to approve who buys the house across the street, and we don’t get to choose who our neighbours will be. Municipal zoning decisions cannot discriminate by creating special rules or barriers for certain kinds of people. As the Manitoba Court of Appeal ruled in Alcoholism Foundation of Manitoba v. Winnipeg (City):

It is simply not acceptable since the advent of the Charter to prohibit a use of land with reference to the attributes of those who may use it, at least where the attributes are those which distinguish members of a disadvantaged group and where there is no evidence to show that such a prohibition is one which can be demonstrably justified as reasonable in a free and democratic society.(Alcoholism Foundation of Manitoba v. Winnipeg (City), 1990 CanLII 8022 (MB CA)) 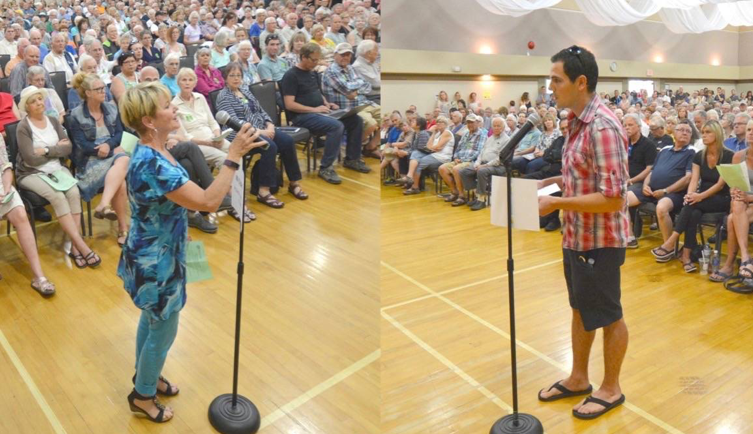 On June 19, roughly 100 people spoke at the public hearing for 222 Corfield St. The meeting was literally split down the middle of the Parksville Community and Conference Centre. The division and acrimony was clearly evident. Parksville City Council ultimately did the right thing by approving the rezoning so that the project can move ahead. In the coming months we will be closely monitoring similar zoning processes around BC to ensure that stigma and prejudice do not find a place within a decision-making processes that can determine the health outcomes of society's most marginalized.

We need your help to continue pressuring governments to uphold the law and ensure discrimination has no place in public hearings. You can help by attending hearings in your community and saying, "yes" in my backyard, or by making a gift to Pivot today. A gift of $25 can help us monitor municipal zoning processes and fight back when decisions are made based on discrimination and prejudice. Together, we can build a more just and equitable society grounded in human rights and compassion.