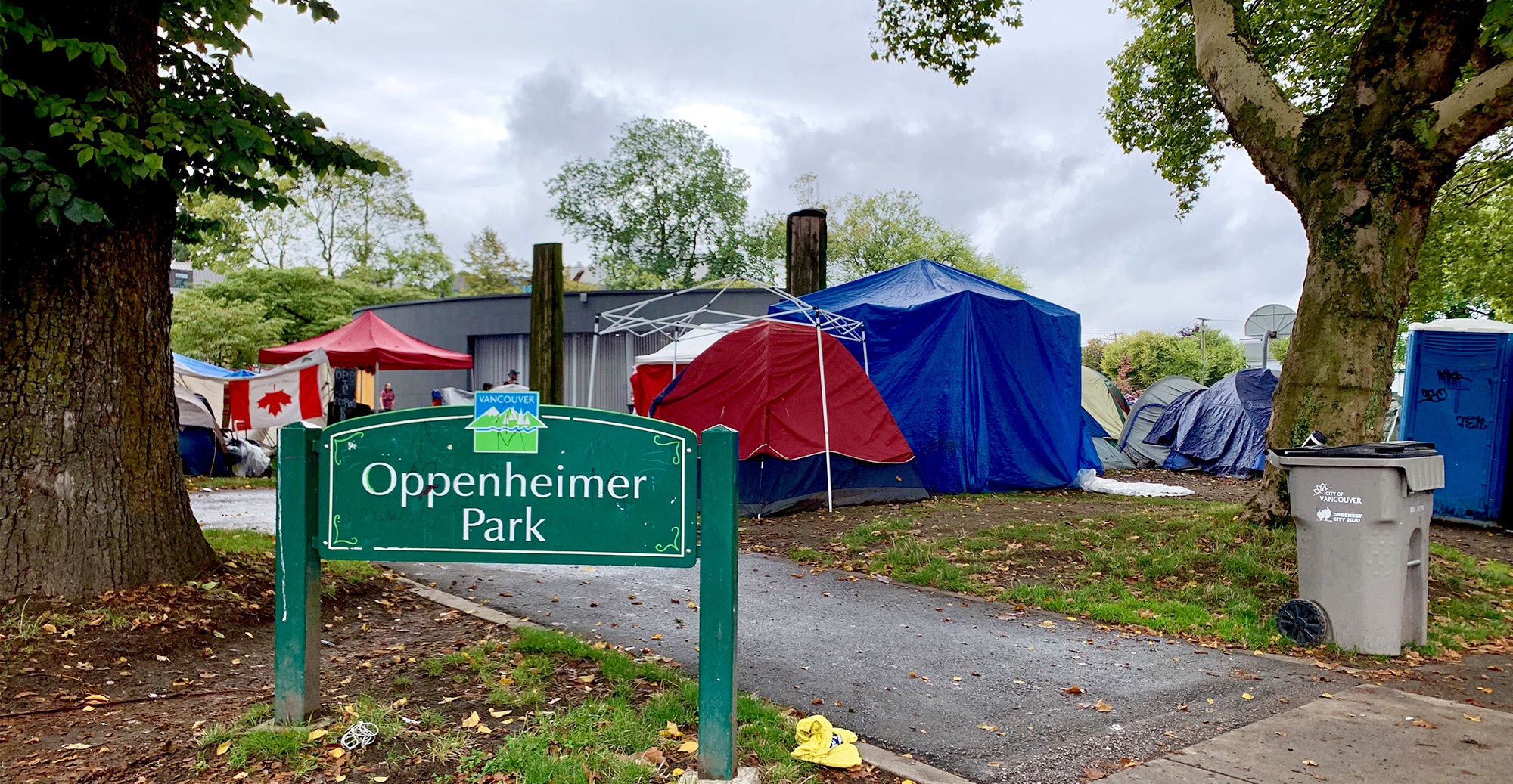 10 days ago, Oppenheimer Park Tent City residents learned the Vancouver Park Board’s latest plans for decampment. At the final scheduled Park Board meeting of the year, Board Members voted on a motion that directed staff to work with partners to “further the voluntary decampment plan, supported by an injunction once conditions are met.” Two days after the announcement, a non-lethal shooting at the Park became a political pawn, wherein decisionmakers leveraged the incident to further the proposed decampment strategy.

Earlier that same week, a 20-person brawl broke out in Yaletown, which didn’t prompt a single call for the closure of Hamilton or Helmcken Streets.

Manipulating a Crime and Violence Narrative to Back Decampment

While a shooting is nothing short of terrifying, and we hope the survivor recovers quickly, this incident became a focal point in a debate embroiling Oppenheimer Park residents, advocates, municipal policymakers, and law enforcement. One article asked, “will someone have to die before the City of Vancouver acts to address an entrenched homeless camp in Oppenheimer Park?” The shooting, an aberration by all measures, took precedence over chronic safety issues that shape the everyday lives of people who rely on public space and live in the Tent City at Oppenheimer.  The narrative of criminal activity and gun violence has been consistently used to skew public perceptions of park safety. Sensationalist narratives, largely originating within the ranks of the Vancouver Police Department, have been adopted uncritically, despite data analysis that contradicts the VPD’s fearmongering.

Gun violence remains an infinitesimal portion of the mortality risks faced by people who rely on public space. The BC Coroners Service reports that the overwhelming majority of deaths of homeless people are accidental, and of those, the vast majority are linked to drug and alcohol poisoning (refer to Table 1 and 2 below). Fundamentally, people are dying because of the colonial policies resulting in displacement, dislocation, and genocide of Indigenous peoples. People are dying because governments have failed to invest in long-term solutions to the housing crisis. People are dying because there is no Safe Supply.

We want to be clear – the dominant safety concerns at Oppenheimer are the tainted drug supply, zero safe tent-heating options, and the absence of adequate, affordable housing options.

We want to be clear – the dominant safety concerns at Oppenheimer are the tainted drug supply, zero safe tent-heating options, and the absence of adequate, affordable housing options. Unlike shootings, these concerns don’t generate outrage or moral panic, nor do they prompt any level of government to vote for decisive, meaningful policies.  The Tent City at Oppenheimer cannot resolve these systemic issues, but in the absence of tangible change, it has become an irreplaceable site of harm reduction, community, and collective struggle.

Over the years, Oppenheimer has been home to many Tent Cities. Most of these communities have been extinguished by city-mediated decampment efforts, typically involving court injunctions. These injunctions, paired with stigmatizing bylaws, have effectively trapped people who rely on public space in a compounding cycle of criminalization. We must ask: how many cycles of displacement will we go through before the government accepts that evicting people from public parks is a meaningless and expensive solution? 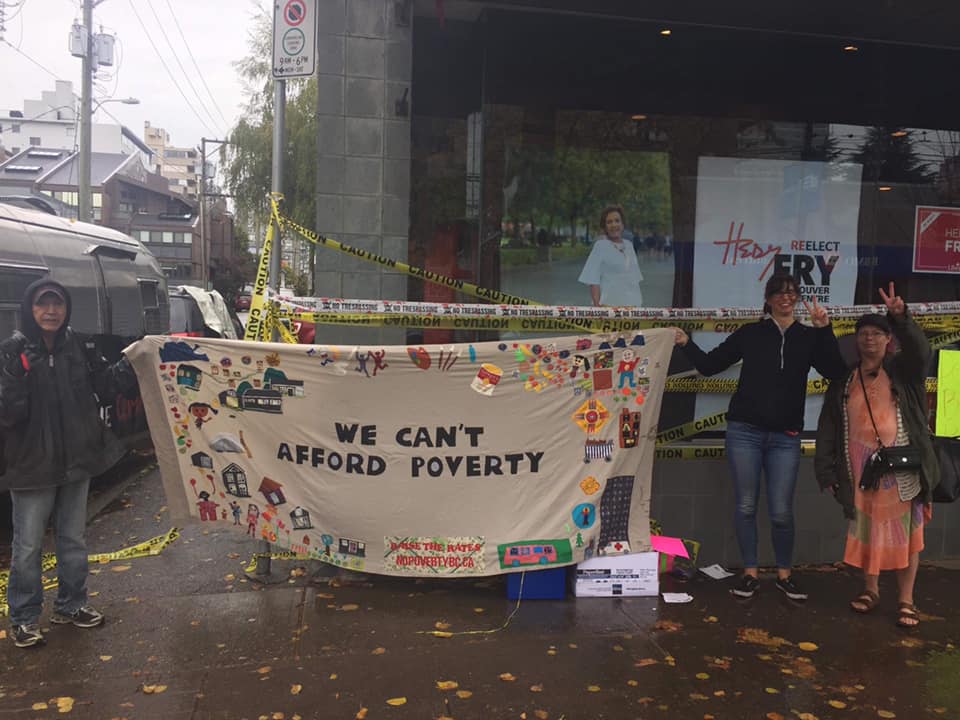 The recent Park Board motion authorizes staff to seek an injunction if “certain [unspecified] conditions” are met. The Park Board does not specify the conditions, nor does it elaborate about plans for a “third party to conduct an independent assessment of the current situation in Oppenheimer Park.” The Park Board press statement proclaims a commitment to principles of reconciliation and consultation, but without any clear mechanisms or accountability checks. For Oppenheimer residents, the announcement and plan for decampment came as a surprise. Residents have been meeting with the Parks Board and BC Housing for months.

The demand for safe, affordable, and permanent housing remains non-negotiable.

Since August, residents have been clear that the Park Board, City, Police, Fire, BC Housing, and social service staff must make decisions through collaboration with them. The demand for safe, affordable, and permanent housing remains non-negotiable. Decampment plans that rely on temporary shelters (including the Extreme Weather Response program or temporary shelters) are unproductive and fail to resolve systemic issues. Even the City of Vancouver’s Housing and Homelessness Strategy notes that “the uncertainty around opening and closure procedures for seasonal shelters each year creates challenges for everyone.” Collaboration between the City and BC Housing has also left Tent City residents skeptical. In the summer, news of the Supportive Housing Registry waitlist freeze broke, and residents learned that vacant units had been left sitting empty for months until BC housing had amassed a stock of 100 units. Freezing BC Housing units creates a bottleneck for anyone who needs emergency housing. The Supportive Housing Registry cannot be artificially inflated for the sole purpose of evicting park residents, as was attempted unsuccessfully in the summer.

Oppenheimer Tent City as a Site of Harm Reduction, Healthcare, and Peer Support

Amidst sensationalist headlines dominated by violence at the Park, local policymakers jockey to deploy the most “effective” responses to the Tent City.  These effective responses are proposed while there has been a gradual – potentially fatal – withdrawal of essential hygiene, civic, and health services that were previously available in the park. Failure to support the basic, everyday needs of Tent City residents and lack of communication leaves Tent City residents scrambling for survival. It was bad enough in the summer, but now residents must also grapple with cold seasonal weather conditions that can cause or exacerbate chronic health issues – including hypothermia, pneumonia, trench foot, or complications from existing health conditions.

When Tent City residents attempt to heat their tents, they effectively violate the Fire Chief’s order and resort to so-called “dangerous measures.” The City’s solution? Residents should leave behind their belongings and community, and go to the local warming centre – which only opens “when it feels like 0 degrees.” Refusing to resource tent cities while imposing strict conditions on them foments a situation where residents are set up to fail, reifying the government’s justification for rapid decampment. Despite inadequate solutions and stigmatizing narratives, peers have continued to support Tent City residents, including regular Park inreach by the Western Aboriginal Harm Reduction Society and DUDES Club.

It would be foolish to claim things don’t go wrong in the Park: yes, there are fires at Oppenheimer (and other Tent Cities). But when there is a fire, people respond; the same way people respond when there is an overdose. Residents respond because they know - this is a person, a friend, a companion, they help. Peers cannot respond when people are pushed into isolation, into corners where no one sees them when they are in distress. An Overdose Prevention Site has been operating in the Park since August, ensuring folks who use substances have access to a 24/7 peer-run safe consumption site. In the context of the continuing drug poisoning crisis, this fixed site enables witnessed consumption, provision of sterile gear, and access to peer support. These are vital interventions that ensure people who rely on public space are not using alone or in isolation. 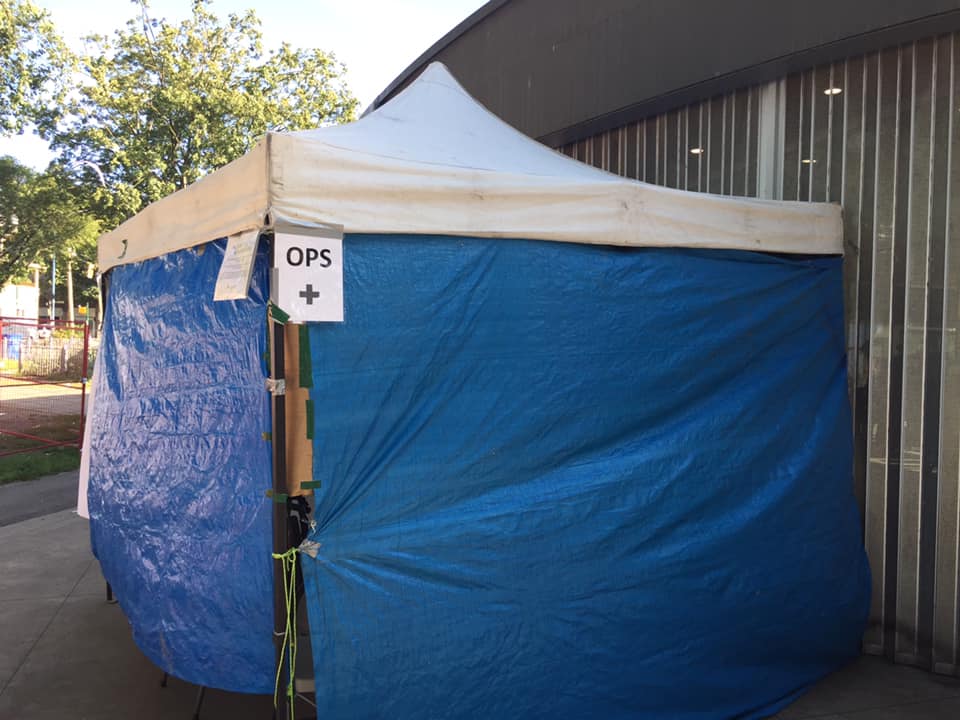 Looking Back, Looking Ahead

As we close out this year and look back on the past few months, we commend the steadfast, principled advocacy of Oppenheimer Park Tent City residents. We stand in solidarity with the assertion of Indigenous sovereignty in the Park. As long as people must rely on public space, we must respect Tent Cities as the safest option in a list of undesirable alternatives. Current efforts to evicting Oppenheimer Park assuage the consciences of some housed constituents and housed policymakers’ paternalistic need to “do something.” There is, however, no evidence to indicate that a conditional injunction will make the community safer. Realistically, forced decampment and displacement from Oppenheimer Park will merely kick off the next cycle of dislocation, inevitably resulting in a tent city. Displacement is never the answer.

The only way to stop this cycle is to house people.

In solidarity with those living at Oppenheimer Park,