For years, the homeless population of Abbotsford has been the target of city and police actions that have effectively made their existence illegal. Bylaws prohibit sleeping in a park overnight, erecting a basic survival structure, or even sleeping in a car. City and police enforcement of these bylaws have resulted in slashed tents, confiscated possessions, and evictions from public spaces.

It’s an experience that is not uncommon for many Canadians who are without homes. Rather than seek solutions to housing, municipalities across the country choose to criminalize aspects of homelessness, just as Abbotsford does, in an effort to make it invisible.

The most recent homeless count in Abbotsford, conducted in March 2014, found 151 people. 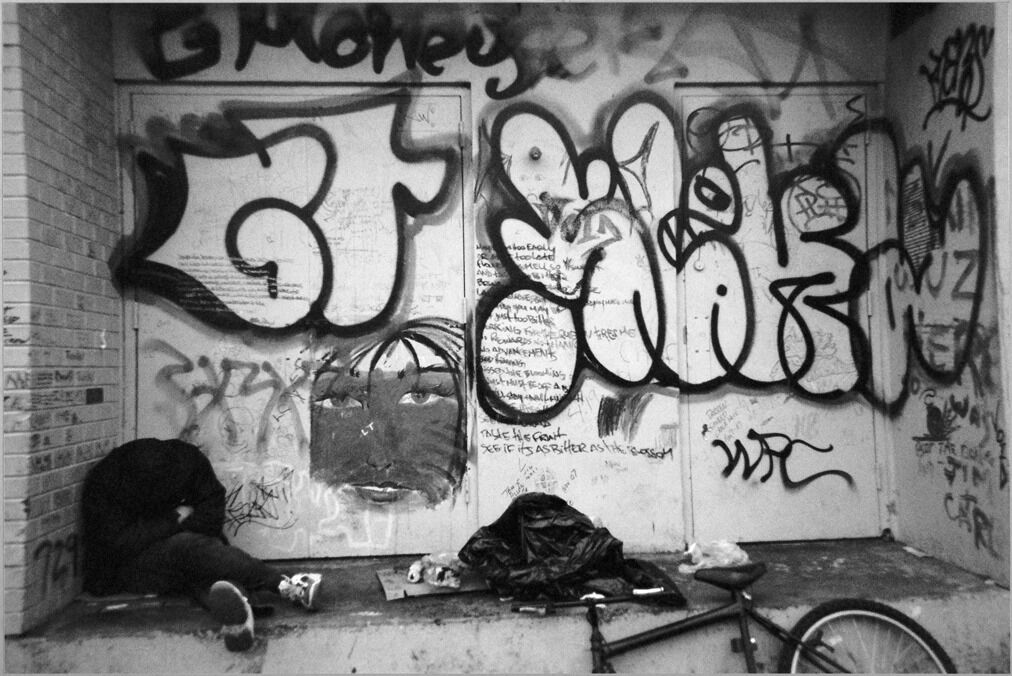 June 2013
Officials with the City of Abbotsford admit to spreading chicken manure on a camp in Jubilee Park in an effort to displace homeless people from the site.

September 2013
The City evicts a group of homeless people who have been camping along Gladys Avenue.

October 2013
Homeless people and community organizers erect a camp at Jubilee Park camp. There are 30 to 40 people sleeping there every night.

November 2013
Evicted campers from Jubilee Park file a human rights complaint against the City of Abbotsford.

December 2013
The City of Abbotsford seeks an injunction to evict homeless campers from Jubilee Park. The injunction is challenged but the city receives a court order approving the eviction, which is carried out just days before Christmas. The many that are unable to find shelter erect a new camp on Gladys Avenue.

February 2014
Abbotsford City Council votes down a rezoning proposal that would pave the way for a 20-bed supportive housing project for men, despite a funding commitment from BC Housing.

July 2014
BC Hydro evicts dozens of homeless people who had been camping across from the Salvation Army, where many of the city’s homeless residents access services such showers and food.

September 2014
The BC Supreme Court agrees to hear a lawsuit brought forward by a group of homeless people, represented by the BC/Yukon Association of Drug Wars Survivors, challenging the City of Abbotsford’s bylaws displacing them from public spaces. The City will make several unsuccessful attempts to have the lawsuit dismissed.

June 2015
The BC Supreme Court begins hearing the case of BC/Yukon Association of Drug War Survivors (DWS) v City of Abbotsford, which represents the first time a group of homeless Canadians have challenged the constitutionality of how they are treated and displaced by government authorities or police.

The BC Supreme Court lawsuit challenges three City of Abbotsford bylaws that have been used to displace the homeless population from public spaces throughout the city.

Pivot Legal Society argued on behalf of DWS that the City’s actions in displacing homeless people violates their rights under Section 2(c) and 2(d) (assembly and association), Section 7 (right to life, liberty, and security of the person), and Section 15 (equality) of the Canadian Charter of Rights and Freedoms.

During the six-week trial that began on June 29, 2015, the Court heard from several homeless residents who detailed how municipal bylaws have been enforced to displace people sheltering in public spaces despite the fact that many have no other options for shelter. Testimonies describe how homeless campers have had tents pepper sprayed by police, had chicken manure dumped on their camp, and been subjected to countless other displacement tactics that put their lives at risk.

The lawsuit brought before the BC Supreme Court is unprecedented: Never before has a group of homeless Canadians been able to challenge the constitutionality of how they are treated and displaced by government authorities or police.

Securing the Constitutional Right to Housing
Federal and provincial governments make provisions for basic health care and education, but they have failed to provide the linchpin to accessing those services – housing – for hundreds of thousands of people across the country. Instead, responsibility for managing the national housing crisis has been left to municipal governments, often with disastrous results.

Creating and enforcing bylaws in a way that criminalizes people because they’re homeless serves only to put their lives at greater risk. They disperse homeless people to less safe, less populous, less policed places and leave homeless people with few or no options for a place to lay down their head.

If the BC Supreme Court lawsuit is successful in striking down Abbotsford’s bylaws, governments will be compelled to shift away from policing and criminalizing homelessness and start working towards long-term and sustainable solutions for housing those without homes – a critical first step in securing a right to housing for all Canadians.

Tent Cities and Homeless Camps
A homeless tent city is an informal community where residents erect tents and other temporary housing structures. Tent cities are usually constructed on public land and near more populated areas where residents can be more readily connected to support and emergency services and near social services where food and water can be more easily accessed. They are often the result of a lack of accessible, safe, and affordable shelter and housing options.

Often informal, tent cities have been erected by homeless people in municipalities across British Columbia. Recent tent cities include:

Vancouver: The 2014 Oppenheimer Park tent city began when a small group of community activists came to camp with the homeless Vancouverites who were already sleeping in the park. They came to support those individuals and to highlight the need for affordable, clean and safe housing. Soon the camp expanded as hundreds of homeless and low-income residents moved in. Erected in July, the city evicted residents that October.

Maple Ridge: Beginning July 2015, more than 65 people set up a tent city in a wooded area behind the Salvation Army on Cliff Avenue. The city opened a temporary low barrier shelter in October that will sleeps 40 and has attempted to house others. The City has sought an injunction to remove the remaining residents of the camp, who are challenging the eviction order.

Surrey: The second-largest and fastest growing municipality in British Columbia is the current home of an informal tent city near one of Surrey’s support service hubs. Police and city officials have dismantled previous camps, only to see them erected elsewhere.