Between 2000 and 2017, police were involved in at least 460 fatal interactions with civilians across Canada. As part of its investigative series Deadly Force, the CBC has assembled the first comprehensive analysis of these interactions and has shared the data with Pivot Legal Society.

Up until this point, no such centralized repository of statistics existed. This vacuum of information is, in and of itself, a problem that engenders a lack of accountability in Canadian policing. Police authorities in Canada have the capacity to collect and release this critical data to the public on an ongoing basis, but they choose not to. 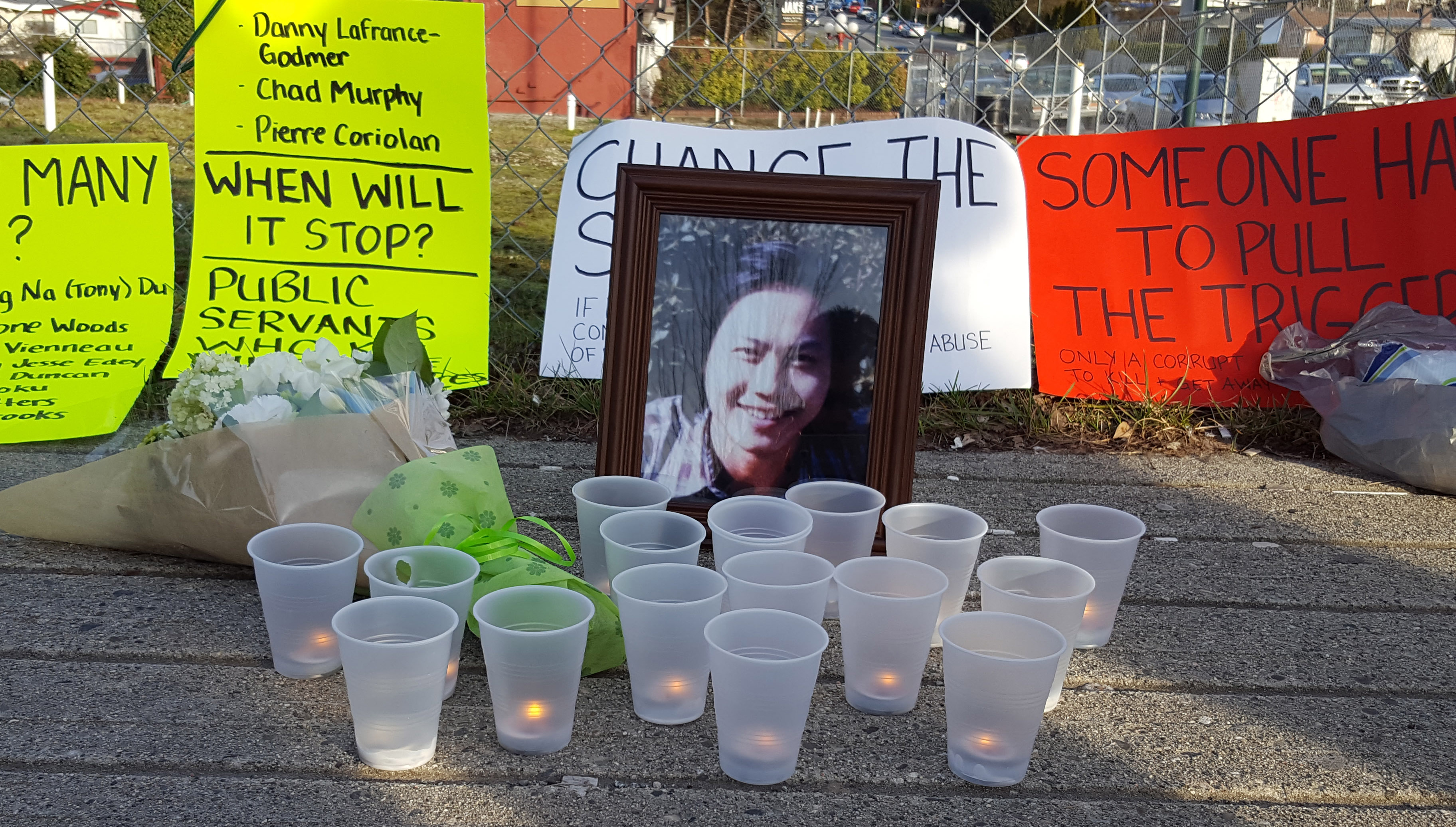 (Photo credit: Peter Kim | Memorial for Tony Du, who was shot and killed by Vancouver police in 2014 | February 2018)

During the 17-year period in question, there was an average of 25 fatal police interactions per year. The general trend has been increasing, peaking at 40 fatalities in 2016. One of the victims who never made it home to his family was Tony Du, shot and killed by the Vancouver Police Department's (VPD) Constable Andrew Peters within minutes of the officer arriving on scene in November 2014. Du was described as a “gentle giant” by an esteemed medical professional, Dr. Soma Ganesan, who testified during the five-day inquest into his death where the painful facts of his encounter with police were laid bare. Du was experiencing a mental health episode at the time of the shooting.

70 per cent of victims suffer from mental health and substance abuse problems.” (CBC)

The CBC’s report reveals that Toronto (52), Montreal (26), Edmonton (23), Vancouver (23), and Calgary (19) recorded the most fatal interactions with police. These are the cities with the largest police forces and populations in Canada. Toronto accounted for 11% of total fatal police interactions between 2000 and 2017.

Provincially, Ontario (152), British Columbia (97), Quebec (86), and Alberta (71) saw the highest number of fatal interactions, which tracks roughly along the same lines as population, however, there are some variances.

After 31 months of delays and foot-dragging by the VPD during the investigation conducted by the Independent Investigations Office, the officers responsible for Gray’s death may finally be brought to justice.

Between 2000 and 2017, 699 police officers were involved in fatal interactions with the public. Canada’s national police force, the RCMP, was responsible for the most (176), followed by municipal forces in Toronto, Montreal, and Vancouver. The vast majority of officers faced no charges. 49 incidents are still under investigation, and only 11 resulted in the laying of manslaughter charges according to data provided by the CBC.

Out of the 460 fatal incidents, only three murder charges were laid against police officers, and all were second-degree. One high profile and particularly egregious case was that of Toronto police officer James Forcillo, who shot and killed Sammy Yatim in 2015. Forcillo, however, was convicted of a lesser charge (attempted murder) and sentenced to six years in jail after shooting the 18-year-old eight times in July of 2013, after Yatim had stepped off a streetcar in Toronto's west end.

The majority of victims were white, a demographic comprising the largest percentage of the Canadian population: 71% according to Stats Canada. Conversely, Indigenous people make up only 4.8% of the population, yet represented 15% of total fatalities.

Members of the Black community, which makes up only 3.4% of Canada’s population, represented 9% of the fatalities. Both racial groups are disproportionately affected by police violence relative to other ethnicities.

Ontario has seen a high number of fatal interactions between police and Black men, underscoring the systemic bias and racism seemingly endemic to the province’s police forces. Jermaine Carby, 33, was a passenger in vehicle who was shot and killed by Peel Regional Police during a routine traffic stop in 2014. A coroner’s inquest jury recommended that police officers investigate ways to overcome unconscious bias during traffic stops and develop more effective methods of de-escalation as a result of this homicide. 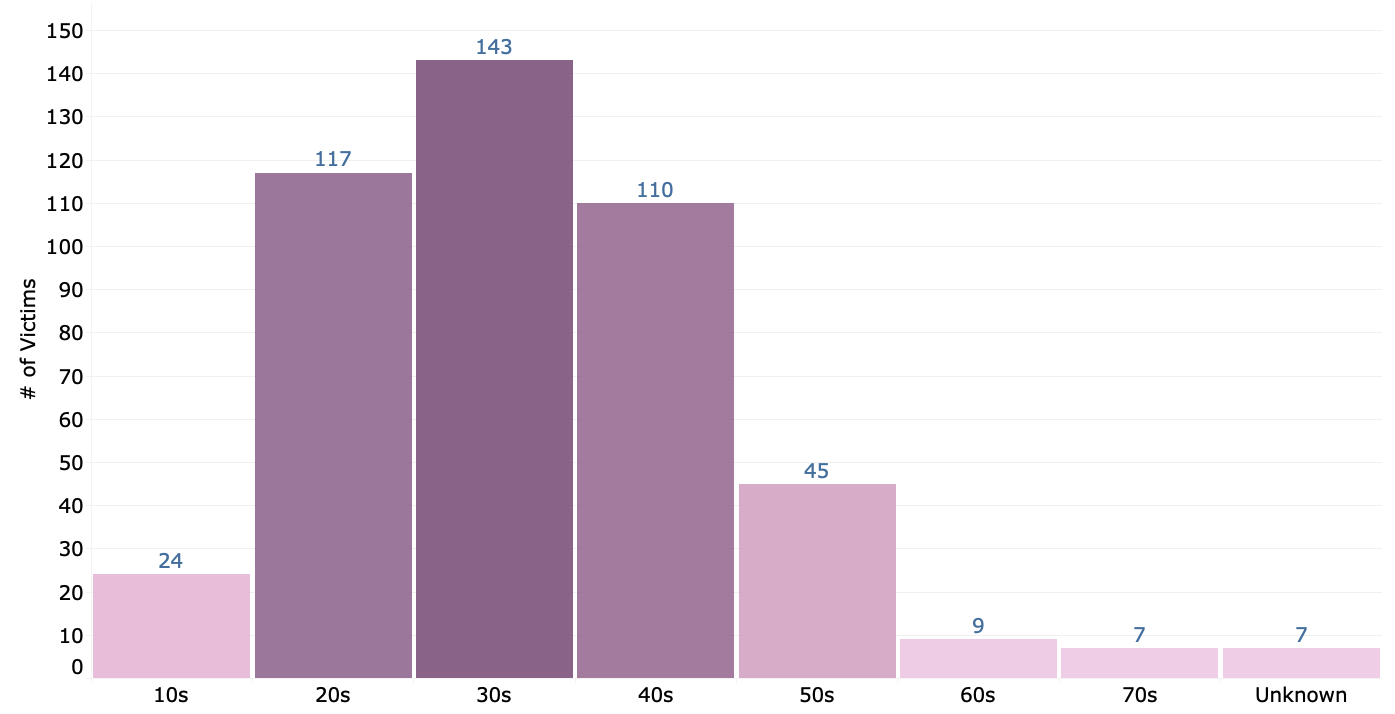 Among those who lost their lives after interacting with police, men in their 30s represented the highest percentage of victims. There were only 14 female victims (3%) out of a total 462. The top causes of death were:

Together these numbers render a disturbing picture illustrating how police violence has fractured families and communities across Canada. Pivot Legal Society has represented many individuals who know this violence first-hand and understand the need for stronger oversight mechanisms to keep officers accountable.

We, alongside our community supporters and partners, continue to work to strengthen those systems that will chip away at the seeming impunity with which police officers in Canada operate. No one should be above the law, including those who purport to uphold it.