On Tuesday, the Supreme Court of Canada rendered a landmark ruling when the Court struck down mandatory minimum sentencing laws that required that judges impose lengthy jail terms for certain gun crimes. Pivot Legal Society intervened in the appeal, and we are thrilled with the result.

This was a landmark decision for Canadian criminal law, and a powerful experience for me personally. This was my first Supreme Court of Canada intervention. The night before the decision was delivered, I had butterfly anxiety nightmares about men in grey wigs and prison. The overwhelming sense of unreality is still floating around my desk. I keep coming back to this paragraph, as though it were an anchor, to remind myself I am not dreaming:

[119] I would dismiss the appeals. The mandatory minimum sentences imposed by s. 95(2)(a) are inconsistent with s. 12 of the Charter and are therefore declared of no force or effect under s. 52 of the Constitution Act, 1982.

Why did Pivot participate in the case? 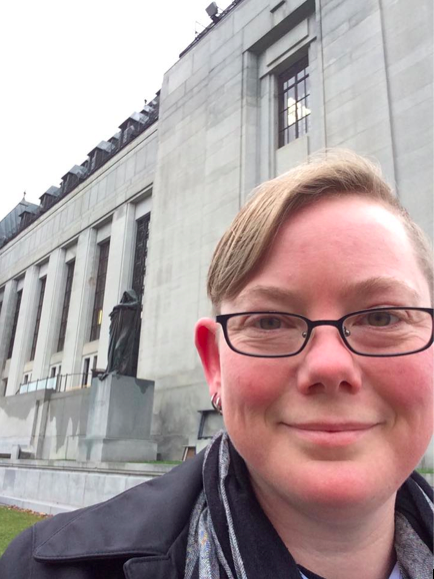 The Nur decision was about gun charges, but Pivot intervened to make a point about the effect of mandatory minimum jail terms more generally. Pivot’s interest in mandatory minimum sentences came out of our work in drug policy, where mandatory jail terms abound, but when we saw this case was headed to the Supreme Court of Canada, we knew it was important to be there.

We argued that mandatory minimum sentences are bad public policy for everyone, but they have the most harmful impact on the least serious offenders. For vulnerable groups such as women and youth, aboriginal people, and people who come before the court as a result of their addictions, mandatory minimum sentencing can amount to cruel and unusual punishment. Hearing their voices, we said, was critical because the Charter guarantees rights to everyone, not just those who have the ability and resources to access the highest appeal court in the land. The Court must be empowered to consider the personal circumstances of other who may face charges in order to ensure that a fair and proportionate sentence is imposed.

We also wanted to comment on how the Court should interpret section 12 of the Charter, which protects everyone against cruel and unusual punishment. We wanted to make sure they continued to understand the impact of harsh criminal sentences on members of marginalized communities, even if those people lacked the resources to challenge the laws. We wanted to remind Courts to consider who may be impacted by the mandatory minimum sentence, and that it would be wrong to have to wait for a “perfect offender” before unconstitutional laws could be challenged.

The court struck down mandatory minimum sentences of incarceration of three years, and five years, for certain gun crimes under section 95(2)(a) of the Criminal Code. The Supreme Court upheld the decision of the Ontario Court of Appeal which found that s. 95(2)(a) is unconstitutional as presently structured because it violate the section 12 guarantee in the Canadian Charter of Rights and Freedoms against cruel and unusual punishment.

The Supreme Court held that requiring judges to impose a minimum of three or five years in jail for possession of a prohibited or restricted firearm violated the Charter of Rights and Freedoms. The Court said that requiring a lengthy jail sentence violated section 12 of the Charter, because it amounted to cruel and unusual punishment. This important decision now opens the doors for further challenges to mandatory minimum sentences that are unjust and ultimately ineffective.

Pivot’s participation in the case was a result of some growing uncertainty about how the courts interpret section 12. Cruel and unusual punishment or treatment is something “so excessive as to outrage standards of decency,” or a term of punishment that is "grossly disproportionate to what would have been appropriate." The section 12 analysis involves a two-part legal test. First, the Court asks whether a particular sentence would be cruel and unusual for the person who is charged. Then, the Court would consider if the sentence could result in cruel and unusual punishment for a “reasonable hypothetical” offender.

Pivot submitted that this second branch was essential because section 12 guarantees everyone freedom from cruel and unusual punishment, this second branch gave a voice to marginalized people who might not otherwise have their voices heard.

The Court affirmed its commitment to the two-part test under section 12 of the Charter. First, a court looks at whether the mandatory minimum sentence imposes “cruel and unusual punishment” (i.e. a grossly disproportionate sentence) on the particular individual who is before the court. In the second part, the court can move beyond who is before the court and ask what conduct or type of person may be captured by the law, and whether it would result in a cruel and unusual punishment on other offenders.

Refusing to consider an impugned law’s impact on third parties would also undermine the prospect of bringing certainty to the constitutionality of legislation, condemning constitutional jurisprudence to a wilderness of single instances. Citizens, the police and government are entitled — and indeed obliged — to know what the criminal law is and whether it is constitutional. Looking at whether the mandatory minimum has an unconstitutional impact on others avoids the chilling effect of unconstitutional laws remaining on the statute books.

The Court declared the mandatory minimum sentence provisions to be of no force and effect because they violated section 12 of the Charter and were not saved by section 1. In Charter litigation the government gets a chance to justify any Charter violation as demonstrably justified in a free and democratic society. In this case, the Court found that the Charter violation was not justified.

In affirming the two-branch section 12 test, the court changed some of the language used to describe parts of it. The “reasonable hypothetical” offender becomes the “reasonably foreseeable” offender (para 57). And, as is common for section 12 challenges, the law was struck down not on the basis of the person bringing the challenge (under the first branch of the test). The law was found to result in cruel and unusual punishment for the reasonably foreseeable offender. The sentences for Messers Charles and Nur were found to have been fit.

The court said some interesting things about stare decisis – a latin phrase which says courts are bound by the precedents set by earlier judgments. At para 58, in reaffirming its commitment to the two-branch test, the Court said:

I conclude that the jurisprudence on general Charter review and on s. 12 review of mandatory minimum sentencing provisions supports the view that a court may look not only at the offender’s situation, but at other reasonably foreseeable situations where the impugned law may apply. I see no reason to overrule this settled principle.

The Chief Justice went on at para 59 to say:

I add this. This Court does not and should not lightly overrule its prior decisions, particularly when they have been elaborated consistently over a number of years and when they represent the considered view of firm majorities

Other impacts of the Supreme Court’s decision

The court made two other interesting observations. The first is a re-iteration of a principle articulated in the much of the case law to this point, that the government cannot save an unconstitutional law by relying on prosecutors to do the right thing. Last year’s Anderson case established clearly that prosecutor’s actions are reviewable only on the basis of abuse of process, and that unlike judge’s decision they cannot be appealed. This question is relevant to marginalized people because prosecutors exercise incredible power in deciding what to charge and how to proceed. Pivot believes that the existence of mandatory minimum sentences gives prosecutors an advantage when negotiating plea bargains, and that accused people may feel it is in their best interest to plead guilty to an lesser offense which does not carry an mandatory minimum sentence in order to avoid jail time- but thereby relieving the crown of having to prove all the elements of the offence. It is for precisely this reason that the section 12 test must have room for these people, because having plead guilty, they are much less likely to have the opportunity to bring challenges against the law.

The dissent of Moldaver, Rothstein, and Wagner suggested that the crown could rely on prosecutors not to proceed with cases in a way that avoided violating section 12. They also suggested a novel test under section 12 that appears in the judgment at para 151. The Chief Justice writing for the majority disagreed. Beginning at para 92, the Chief Justice writes:

Since writing these reasons, I have had the opportunity to read the reasons of my colleague, Justice Moldaver, who concludes that s. 95(2) does not violate s. 12 of the Charter essentially on the ground that the prosecution may elect to proceed by summary conviction where the conduct at issue is such that imposing the mandatory minimum sentence would be grossly disproportionate. I do not agree that Canada (Attorney General) v. PHS Community Services Society, 2011 SCC 44, [2011] 3 S.C.R. 134, supports the rule that a mandatory minimum law that imposes grossly disproportionate sentences in foreseeable cases may be saved from unconstitutionality by prosecutorial discretion to proceed by another route.

The Chief Justice goes on at para 96:

This leads to a related concern that vesting that much power in the hands of prosecutors endangers the fairness of the criminal process. It gives prosecutors a trump card in plea negotiations, which leads to an unfair power imbalance with the accused and creates an almost irresistible incentive for the accused to plead to a lesser sentence in order to avoid the prospect of a lengthy mandatory minimum term of imprisonment. As a result, the “determination of a fit and appropriate sentence, having regard to all of the circumstances of the offence and offender, may be determined in plea discussions outside of the courtroom by a party to the litigation” (R. M. Pomerance, “The New Approach to Sentencing in Canada: Reflections of a Trial Judge” (2013), 17 Can. Crim. L.R. 305, at p. 313). We cannot ignore the increased possibility that wrongful convictions could occur under such conditions.

…The discretionary decision of the parole board is no substitute for a constitutional law…That is the function of one person alone — the sentencing judge.

Mr. Lloyd was a Downtown Eastside resident subject to a mandatory minimum sentences for possession for the purpose of trafficking of three controlled substances to which he was addicted. A BC Provincial Court judge struck down the mandatory minimum sentence on the basis that it violated section 12 of the Charter for a reasonably foreseeable offender, but the government appealed.

A decision on whether Mr. Lloyd’s case will be heard by the Supreme Court of Canada is expected soon.

Pivot was very fortunate to work with two incredible lawyers - Michael Feder and Julia Lockhart - who practice law at McCarthy Tétrault LLP and were a critical part of our legal team on this intervention. We are so grateful to Mike and Julia for contributing their time, expertise, and resources to this case.