Fight homelessness, not people without homes

A Supreme Court Judge in New Westminster has granted the City of Abbotsford an injunction, requiring the residents of the Jubilee Park homeless camp to take down their tents and leave the City's property by 4:00 PM, December 21st. Five days before Christmas, and in the midst of the lower mainland's largest snowstorm of the year, Pivot's clients are being told they need to leave the park, yet still have no place to go. The City of Abbotsford was able to convince the Judge that other options for shelter exist, such as the Salvation Army Centre of Hope homeless shelter, but many of the homeless campers maintain they are not welcome at this location and others because of the barriers the private operators put in place.

DJ Larkin, who represents the group of homeless men and women, will now begin work gathering evidence to show that many of them will not be able to access shelter, in the hopes of getting the order overturned.

Years ago, when I was graduate student working as a teaching assistant for the first time, I was speaking to my group of first-year students about the growing number of people without homes in Vancouver. I noticed a young woman in the front row furrowing her brow as I spoke. Eventually, she raised her hand and asked: “when you say people without homes, are you talking about homeless people?” I saw a look of comprehension dawn on the faces of a few other students, as they thought about that familiar term. That day, I think I learned more about what it means not to have a home in our society than any of my students. I realized that the descriptor "homeless" has taken on a meaning and connotation that includes so much more than the lack of a home; and addressing homelessness means more than the actually lack of housing units accessible to people with very low incomes, but battling the stigma and stereotype of people who are unhoused.

Yesterday, we headed out to Abbotsford, BC to announce a human rights complaint filed on behalf of homeless people living in that municipality. The complaint, which names the Abbotsford Police and the City of Abbotsford, was triggered when municipal workers spread chicken manure around a homeless camp with the blessing of the City Manager, and then slashed the tents of people living outdoors. If that wasn't enough the police also used their pepper spray to coat the inside of the tents, destroying the belongings and setting a trap for the occupier when they returned and opened the door. 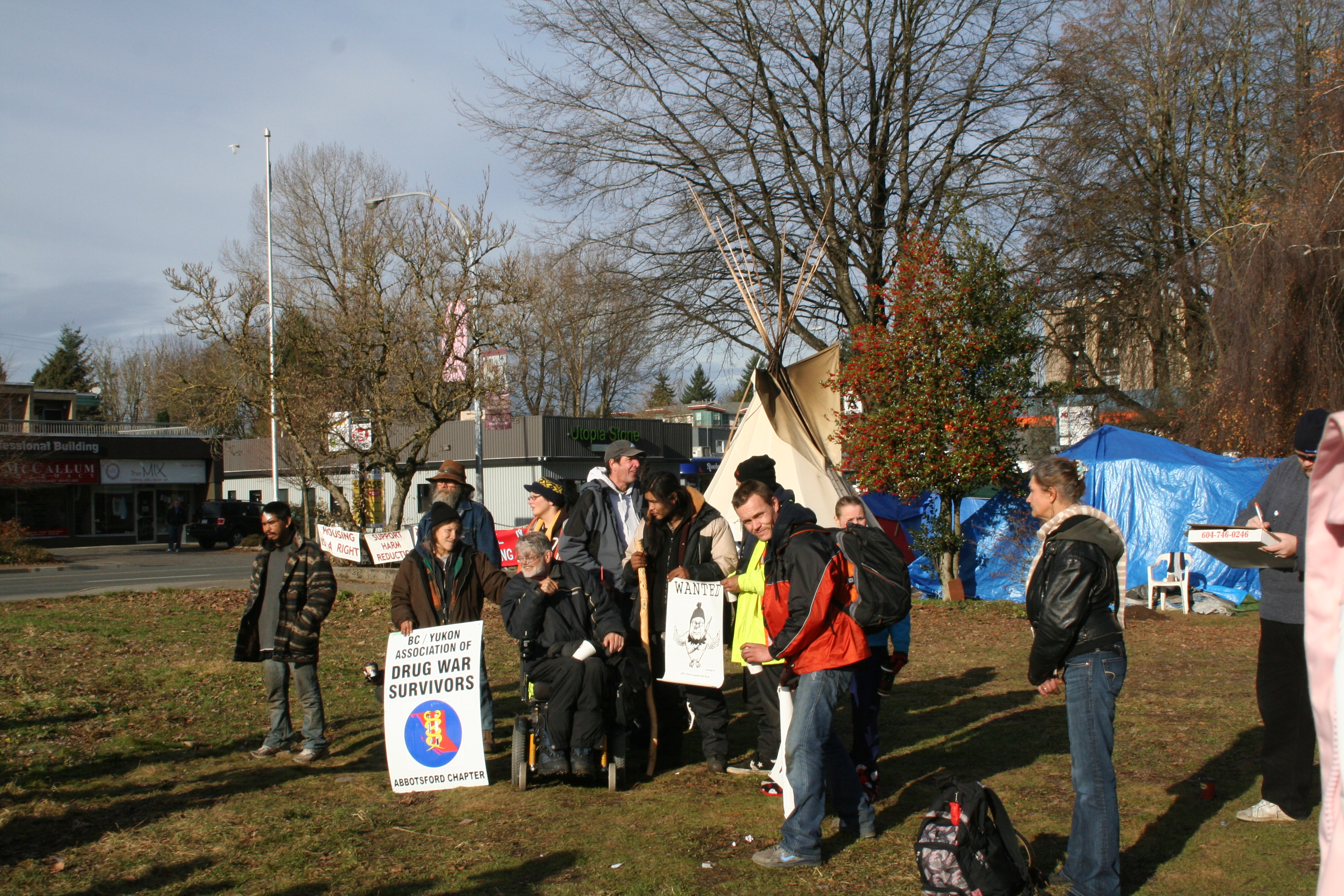 But the harassment the homeless in Abbotsford have faced doesn't begin or end with the chicken manure and pepper spray. D.J. Larkin, Pivot's housing lawyer, has been working with the homeless community in Abbotsford since these events occurred in June of 2013, and has uncovered a pattern of discrimination by both city officials and members of the Abbotsford community.

Take the story of Harvey Williams, who was at the launch of the human rights complaint this morning with this his black and white cat, Buddy, by his side. Harvey has lived in Abbotsford since 2006, and has been homeless on and off for all of that time. He used to sleep outdoors in a park with no shelter, until someone kindly offered him a tent. But once he erected the shelter, that's when he says the harassment began.

Before long someone had stabbed Harvey's tent, and other individuals had yelled at him to leave. In early 2013, police asked Harvey to vacate the park, so he moved his tent to a grassy hillside nearby. There, while he and his cat were asleep inside, somebody set fire to his tent. While Harvey and his cat were able to make it out okay, sadly, these types of stories are all too common. Homeless people in Abbotsford and across the country face high levels of violence, including life-threatening violence, at the hands of people who are housed. During the summer of 2012, at least three homeless men where seriously beaten around Vancouver's Stanley Park in separate attacks. No-one was ever arrested.

In response to the dangers that they face as individuals, Abbotsford’s homeless community, in collaboration with community organizations, have set up a camp for people living outside. The Jubilee Park camp has been operating since October 21, 2013, with portable toilets and daily cleaning schedules. The residents have even welcomed members of the public and school groups who come to the camp to learn more about homelessness in Abbotsford.

Now the camp is at risk, with the City of Abbotsford threatening to tear it down. At the press event announcing the launch of the human rights complaint, people shared their fears about the possibility that the home they have created will be destroyed.

For Harvey, the camp means a lot. He feels safer knowing that there are people he can trust sleeping near him, and that they'll be looking out for him. The camp also provides companionship and a sense of purpose. He used to walk around collecting recyclables, but as his health has declined, he now finds it hard to move around so much without getting dizzy. People who chronically experience homelessness in Abbotsford, and across the country, are disproportionally living with disabilities, including mental illness and substance dependence. Twenty percent of unhoused people in Canada are between 16 and 24 and include a disproportionate number of LGBT youth, and youth from the foster care system. Aboriginal people are over-represented among the homeless in almost every urban centre in Canada, and that over-representation grows dramatically as you travel further west or north. In short, it is a deeply vulnerable population.

But despite that vulnerability, homeless men and women do not receive the protection or support they need from our justice system. Homelessness and social condition are not covered under either B.C.’s Human Rights Code or Canada’s hate crime legislation, and in Abbotsford, where homeless residents have clearly been targeted by the local government based on their housing status, 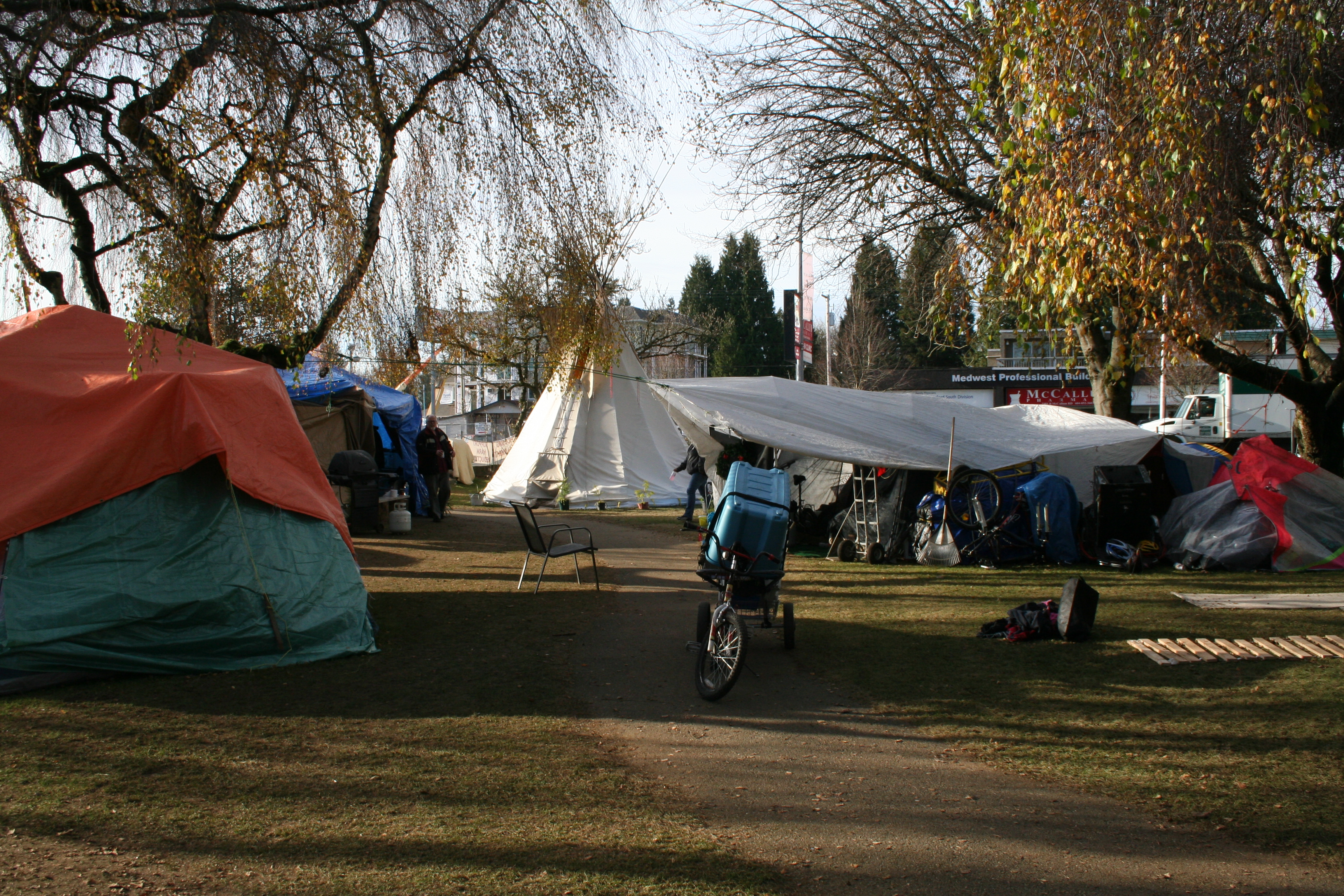 homeless people face criminalization as a result of their deep poverty. Laws that criminalize homelessness include bylaws against subsistence activities such as street vending or panhandling, sleeping or lying down on public property, erecting a temporary shelter, and urinating in public. People who are perceived to be homeless are also disproportionately targeted to be ticketed or charged for a host of other offences.

As the cold weather rolls in, no one would argue that the Jubilee Park camp in Abbotsford is a lasting solution to the affordable housing crisis in Canada. But people at the camp today found it insulting that the City has said they will be shutting down the camp because of safety issues. The safety issues that the City has raised are, as DJ puts it, the safety concerns that arise from being homeless, not from building a community. With at least 200,000 Canadians experiencing homelessness in any given year, and both the government and the courts choosing to abdicate responsibility for addressing the crisis, new-found concern for the safety of the camp residents rings hollow.

We believe the City of Abbotsford has it backwards. Instead of asking themselves, "how can we protect our community from the homeless?", all of us should be asking ourselves a much more difficult question: "how can we allow people who are part of our community to be left out in the cold, without a home?"