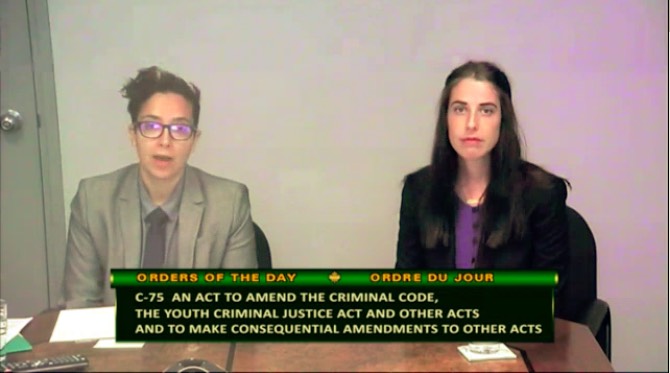 Criminalizing poverty threatens the health and safety of marginalized communities and traps them in an unending cycle of danger and fear of arrest. That is why Pivot lawyer Caitlin Shane and lawyer and Pivot board member Naomi Moses (Rosenberg Kosakoski LLP) recently spoke to members of parliament in Ottawa: to remind them of the impacts of unconstitutional laws on the health, safety, and Charter rights of Pivot’s clients.

Last month, Caitlin and Naomi testified before the House of Commons Standing Committee on Justice and Human Rights, urging them to adopt certain proposed amendments under Bill C-75: An Act to amend the Criminal Code, the Youth Criminal Justice Act and other Acts and to make consequential amendments to other Acts.

The amendments would end the mandatory imposition of the victim fine surcharge by giving judges the discretion to waive the fine for those unable to pay it. Currently, every person convicted of a criminal offence in Canada must pay a fine of $100 – $200 per conviction—regardless of whether they can pay it or the harms that payment would cause.

Many of Pivot’s clients are convicted of low-level and victimless offenses, such as breaching court orders to refrain from substance use and possessing drug paraphernalia. This means that a person carrying harm reduction supplies for safety could be forced to pay $100 dollars, which creates significant financial hardship for someone living on social assistance.

For Pivot’s clients, a mandatory financial penalty makes it even harder to buy food, pay rent, support children, and obtain the necessities of life. Moreover, those who don't pay (because they can’t) are under constant threat of re-arrest. As evidenced by Supreme Court cases like Canada (AG) v Bedford and Canada (AG) v PHS Community Services Society, the fear of arrest alone has direct implications for a person’s safety:

In April, Pivot Legal appeared before the Supreme Court of Canada and urged judges to abolish the mandatory victim fine surcharge. On behalf of Pivot, lawyer Graham Kosakoski argued that the charge amounts to cruel and unusual punishment for those living in deep poverty and unable to shoulder the financial burden. The Supreme Court has not yet delivered its judgment on the matter, but we are hopeful it will agree with us that the mandatory victim fine surcharge has no place in a free and democratic society. The introduction of amendments to the provision under Bill C-75 would certainly suggest that Parliament is concerned about the surcharge’s negative consequences.

The Power of Words

In addition to supporting the proposed amendments and speaking to the harms they would ameliorate, Caitlin and Naomi provided the Committee with recommendations to make the proposed amendments stronger and more accessible to people who will be most impacted by the law. In their submission to the Committee, Naomi urged members to change the wording of subsection 5 to reflect what judges did prior to 2013, before the surcharge was made mandatory.

The general practice then was for a judge to exempt a person from paying the surcharge without a formal application, after the individual was given a chance to speak to their financial circumstances. Pivot asked that the words “an offender establishes to the satisfaction of the court that” and, “on application of the offender” be removed from the wording of the proposed amendment to make the undue hardship exception more accessible to people living in poverty. With these changes, people would not have to make a formal application to have the fee waived. They would only need to explain their circumstances to the court in person.

A revision such as this would ensure that the hardship exemption is accessible to the people who need it most: people living in poverty, unrepresented by counsel, and often convicted of relatively minor offences, including shoplifting groceries, breach of conditions, and failure to appear, all of which are common criminal charges in the Downtown Eastside.” ~ Naomi Moses

Caitlin and Naomi also urged the Committee to consider expanding the scope of the bill to waive existing surcharges that have been imposed on people who are unable to pay them, and who have already asked for extensions of time to pay. Without this addition, people who have outstanding surcharge debt under the previous legislation would still be expected to pay—and a law that may well be unconstitutional would still be permitted a lingering grip on individuals who were charged before the amendments take effect.

The mandatory victim fine surcharge is one of many laws and policies that fail communities living on the margins. For those entrenched in deep poverty and hounded by the criminal justice system, the mandatory surcharge and its ripple effects make it harder for people to live, work, shelter, and organize in their communities. It is a systemic problem we are committed to fighting, and we are pleased the Government of Canada is taking steps to end this practice.

by Caitlin Shane
Blog, Homes For All.