Imagine if your city government decided to take a public vote to determine whether you and your family members should have access to health care.  Maybe they decide that your mother is not entitled to receive the insulin she needs to manage her diabetes.  Based on what the public decides about your mother and her illness, and not what her doctors think should be done to promote her health, your city government says it will pass a bylaw that prevents her and others in her situation from receiving that treatment in their home community.  Preposterous and unreasonable?  Absolutely.   But, this is exactly what happens when municipal governments decide to ban harm reduction services based on public opinion and stigma about drugs and the people who use them.

Today, my clients - three individual drug users and an organization representing drug users in British Columbia - filed two legal actions against the City of Abbotsford challenging its 2005 “anti-harm reduction” bylaw.  We filed a lawsuit in BC Supreme Court and a claim at the BC Human Rights Tribunal, and then held  a press conference outside of Abbotsford City Hall announcing these claims, surrounded by drug users and organizations that support people who are dependent on drugs. 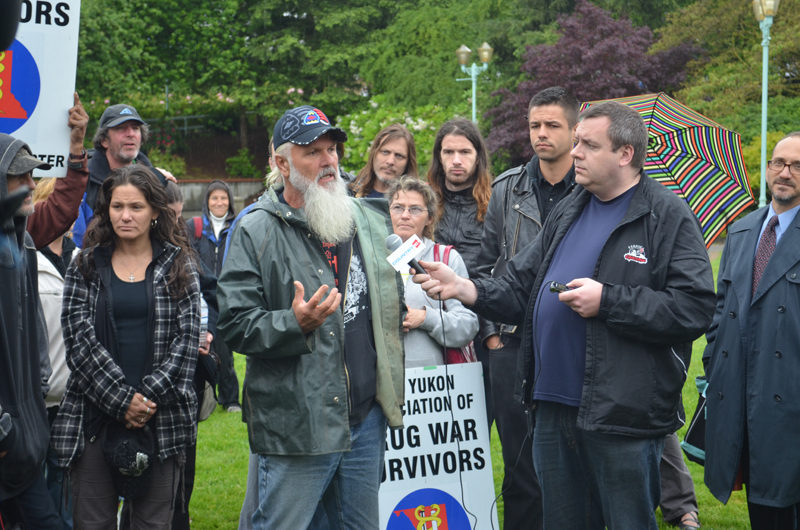 My clients are seeking a number of declarations from the court, including a declaration that Abbotsford had no authority to pass a bylaw that restricts access to health care for people who use drugs, and that the Charter rights of drug users and people who are dependent on drugs are being infringed by this bylaw.  From the Human Rights Tribunal, we are asking for a declaration that the bylaw infringes the BC Human Rights Code because it discriminates against people who are dependent on drugs by denying then access to health care that is available to people who have other disabilities.

Eight years ago, based on public sentiment that drug users in Abbotsford were not worthy of live-saving public health services available in other cities in British Columbia, the Abbotsford City Council passed the province’s most sweeping prohibition on harm reduction.  Harm reduction is an evidence-based approach to providing health care services for people who use drugs. It is an intervention that has been proven to be an effective – and cost-effective - way to improve public health and reduce death and the spread of disease without requiring drug users dealing with dependence to be abstinent.

Abbotsford restricted access to harm reduction services through an amendment to its zoning bylaw, which is typically the means that municipalities regulate the use and development of land.  This bylaw amendment defined “harm reduction” to include a wide range of activities, from growing cannabis for medical purposes and providing sterile needles to people who inject drugs to supervised injection services, like those that are provided at Vancouver’s Insite, North America’s only sanctioned facility of its kind.  Abbotsford then, by not permitting harm reduction use in any zone of the city, effectively created a ban on these services throughout the city.

In the years since this bylaw was passed, my clients and others in the community, including Fraser Health Authority, the provincial body empowered to deliver health care services in Abbotsford, have been calling for its repeal.  Abbotsford, which has over 500 injection drug users, has rates of Hepatitis C infection and hospital admissions due to overdose that exceed the provincial averages and the averages in other communities where harm reduction services are available. While this bylaw is in place, FHA feels that it cannot deliver any harm reduction services in Abbotsford, regardless of the ongoing public health crisis there.

Despite the bylaw, some community organizations that recognize the importance of this life-saving service have been providing clean needles around Abbotsford, either in conjunction with other already-existing social services or from a mobile dispensing van.  But, the bylaw has created a chilling effect that has immobilized the health authority from openly funding this service and providing the needed capacity to deliver it effectively.  While the bylaw is in place, there is no room for FHA to partner with community organizations and deliver what it has determined, based on the best practices of the BC Centre for Disease Control and reams of peer-reviewed scientific study, is the most effective and cost-effective strategy for promoting public health.   In the meantime, the lives of people who use drugs are put in jeopardy and the public health suffers, including the health of people in Abbotsford who don’t use drugs.

One key aspect of these legal challenges is the declaration we are seeking that Abbotsford acted outside of its authority when it passed a bylaw that limited access to health care.  Provincial legislation in BC that grants municipalities powers to govern with bylaws explicitly states that a city cannot restrict access to health care without provincial approval.  Abbotsford had no such approval before passing this bylaw, and we are seeking to have the bylaw struck down on this basis.

Having the BC Supreme Court make a determination that a municipality cannot pass this type of bylaw is important not only for the people who are denied health care in Abbotsford, but for all people who benefit from harm reduction across British Columbia.  Other municipalities, including Surrey, Mission and Coquitlam, have also passed zoning bylaws that restrict access to health care for drug users.  While not as sweeping a restriction on services as Abbotsford’s bylaw, these municipalities’ bylaws have limited the provision of methadone maintenance treatment for people who are dependent on drugs and are taking steps to manage their addiction and stabilize their lives.  Emboldened by the unchallenged steps that Abbotsford has taken to target the most marginalized members of its community, it’s likely that Mission, Surrey and Coquitlam are not the last of BC’s cities to go down this route.  My clients’ position is that municipalities should not – and have no authority to – stand in the way of proven medical interventions such as these.  To say otherwise is bad policy, contrary to the scientific evidence demonstrating that harm reduction strategies promote public health, and a violation of the Charter and human rights of people who are entitled to equal treatment under the law.

You wouldn’t stand for your right to access health care being put to a public vote.  Why should you, after all?  For the delivery of health care, we understand fully well that the doctors and scientists are the experts and not our politicians and neighbours.  The same respect should be afforded to the experts who say that harm reduction services are needed in Abbotsford to promote the public health and save the lives of people who use drugs.  This last year, the Ontario Human Rights Commission explicitly warned several municipalities that were on the verge of passing restrictive bylaws that they cannot pass zoning bylaws that restrict access to health care based on public opinion.  The OHRC said that to do so would be discriminatory and contrary to human rights legislation.  If the City of Abbotsford maintains the anti-harm reduction bylaw against the advice of doctors and researchers, my clients are prepared to ask the courts to strike down this harmful bylaw and order the city to stop obstructing access to health care for drug users.