Abbotsford City Council possibly does something reasonable about harm reduction

After eight years of head-in-sand policies regarding harm reduction, including the province's most oppressive zoning bylaw limiting health services, the Abbotsford City Council may have seen the light of day.

Last Monday, the Executive Committee of Council voted unanimously to repeal the prohibition on harm reduction services in the City's zoning bylaw.  Although the Committee has not set a public target date for this change, signs indicate that Council has finally turned a corner in its approach to life-saving health care approaches such as distributing clean needles to people who are injecting drugs.

The history of the bylaw is a complicated one.  In 2005, Abbotsford City Council amended their zoning bylaw to add “harm reduction use.”  For the purpose of the bylaw, harm reduction use included, 1) the growing, production, manufacture, sale, distribution and trade of drugs listed in Schedule 1 of the Controlled Drugs and Substances Act, including cannabis marijuana, or any by-product of cannabis marijuana, or any substance held out to be cannabis marijuana; 2) Methadone treatment clinics and dispensing facilities, except where administered by a Provincially registered pharmacist; and 3) Needle exchanges, mobile dispensing vans, safe injection sites, and any other similar uses.

The zoning bylaw was further amended to prohibit “harm reduction use” in any zone of the City.  In comments in support of his City’s anti-harm reduction policies, Abbotsford Mayor Bruce Banman made his position on harm reduction clear: "you are, if you are a drug user, a criminal. You're not a helpless victim. You are, and choose to be, a criminal. It is an illegal activity that you are doing. If you are a pedophile, you are a criminal. And how we deal with criminals is we lock 'em up."

The bylaw runs contrary to plans outlined by the Fraser Health Authority to implement harm reduction strategies in the community.  As noted by the regional health authority, the bylaw has an impact on their provincially-mandated health provision work.  Abbotsford currently faces escalating rates of infectious disease higher than both provincial and national averages.  However, Fraser Health Authority refuses to introduce harm reduction services while the bylaw is in place.

Some groups in Abbotsford have flouted the restrictions in the bylaw and are distributing clean needles to injection drug users, either through surreptitious distribution at a location where other services are offered or through operation of a mobile van. 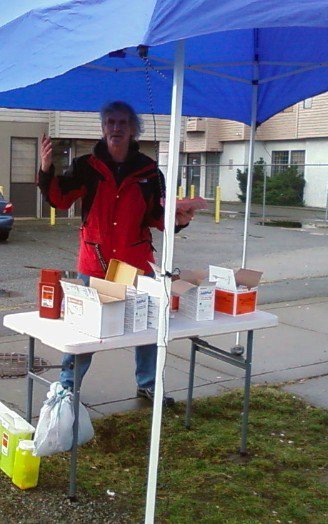 However, the bylaw has created a chilling effect and community organizations wishing to operate overt services are unable to secure approval and funding from the health authority, which has stated explicitly that the bylaw is an obstacle to providing service.

From a legal standpoint, the authority for healthcare delivery is a provincial responsibility, not a municipal one.  If a municipality stands in the way of effective healthcare service through its zoning bylaws, the health authority has the right to deliver service regardless of the municipality's position, which- more often than not - is informed by "not-in-my-backyard" (NIMBY) community opinion.  Zoning by public opinion is, of course, contrary to the purposes of zoning and a possible violation of human rights of drug users, as expressed by the Ontario Human Rights Commission in a letter to a municipality trying to restrict access to methadone clinics.

Abbotsford has been engaging in a process to "review"the bylaw for over a year.  In May 2012, I presented these legal arguments to the Executive Committee and Pivot joined the voices of healthcare professionals, drug users, and many others who opposed this harmful bylaw.

Now, following seemingly endless contemplation and public hearings - in which 85 percent of the hundred or so commenting supported harm reduction - the Council has begun to take an oh-very-gentle about-face.  Council directed staff to come up with an amendment that removes the definition of "harm reduction."  This will then have to be approved by Council and be the subject of yet another public hearing.  If the bylaw gets amended, other restrictions will be put in place.  Staff was also directed to develop a "Good Neighbour Agreement" policy for needle exchange service providers, and use Good Neighbour Agreements to mitigate land use impacts and require needle exchange to be provided in conjunction with other services.  The policy, once again, must pass through the gauntlet of Council approval.

It is clear that, despite a clear vision from the health authorities, Abbotsford City Council can't seem to let go of control over how harm reduction is delivered in the City.  What remains to be seen is whether the City will actually allow for meaningful change that saves lives, or continue to step out of the bounds of its jurisdiction and put the public health at risk.