This graph was featured in Metro Vancouver homeless count reveals failure of government.

Ending discrimination on the basis of social condition: The next frontier in the fight for affordable housing

"Social condition is the situation you have in society because of your income, your occupation or your level of education." 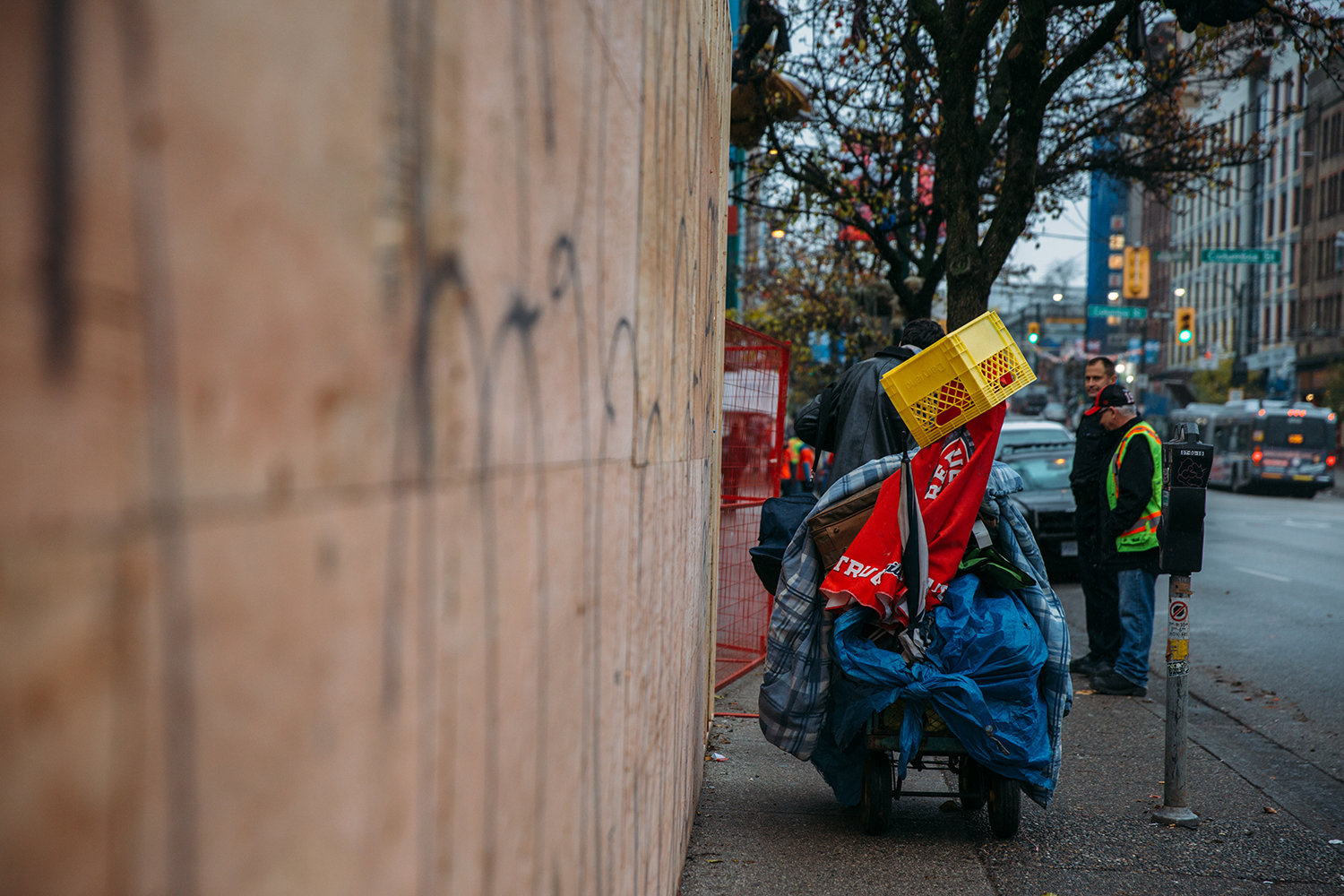 Since Pivot began working on housing issues nearly 15 years ago, we have been calling on the federal and provincial governments to step up and invest in a range of affordable housing options to address a crisis that has evolved alongside our organization. As the number of people experiencing homelessness continues to increase, the research demonstrating that homelessness is akin to a death sentence mounts, and people experiencing homelessness continue to take bold action to stand up for their rights, we are finally starting to see a little bit of action.

In BC, the provincial government has put funding in place for several quick turnaround projects. Service providers are eager to move ahead with desperately needed shelter spaces and modular housing units. We should be celebrating this small victory. Instead, as another winter sets in, projects are being cancelled or delayed as a result of discrimination in municipal public consultation processes. 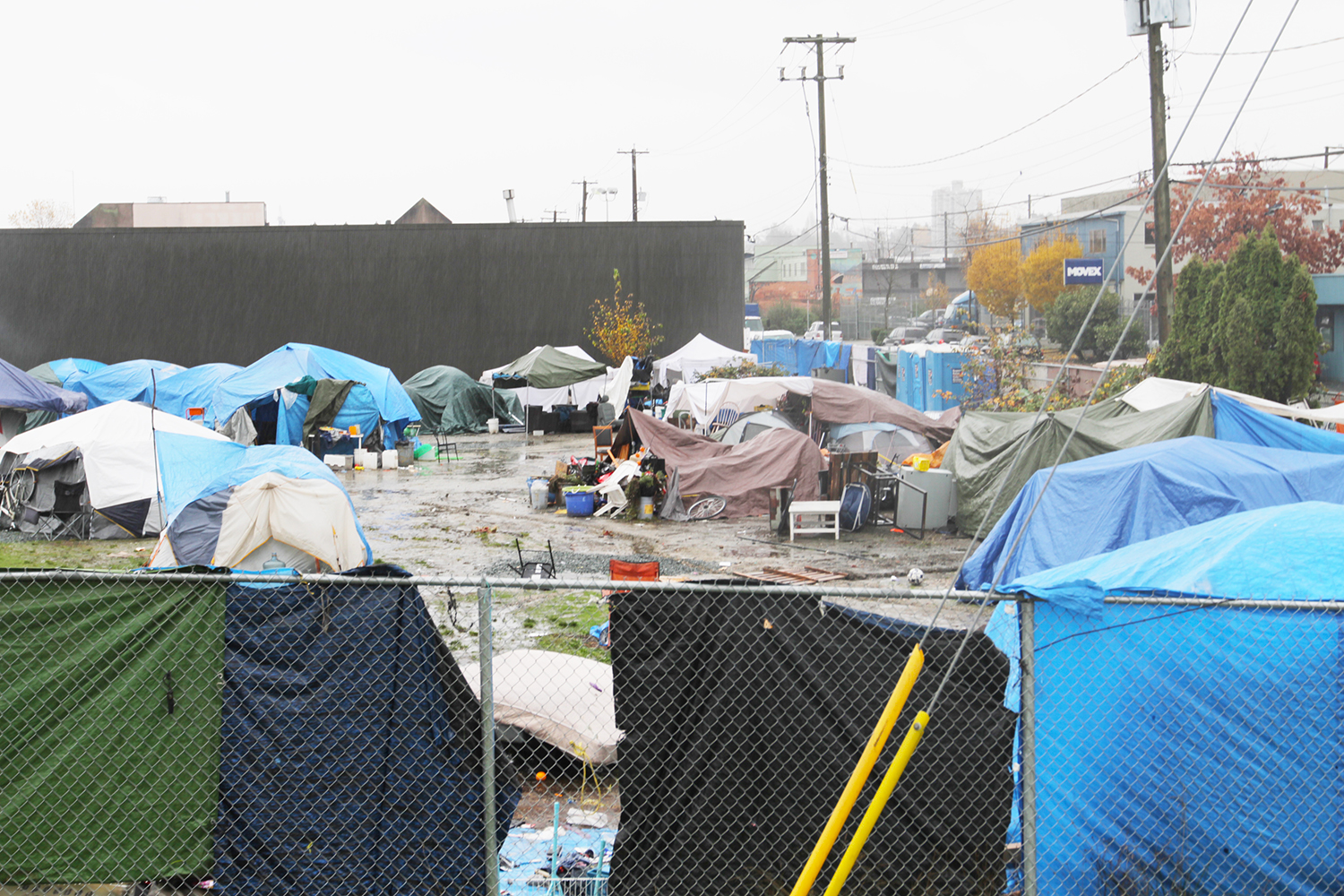 While housed people vehemently opposing services for homeless residents in their community is nothing new, it is quickly emerging as one of the biggest barriers to addressing the housing crisis. Municipalities across BC have authority to hold public consultations, and approve or dismiss applications to develop housing using their power over land use and zoning within their jurisdictions. This power, which is well equipped to consider traffic flow, sewers and view corridors, has resulted in a series of poorly managed referendums on whether or not people living in poverty belong in a community.

As a result, tonight when you crawl into bed, there will be vulnerable people including people with disabilities and serious illnesses, seniors, young people who recently left government care, and women fleeing violence, sleeping outside because their neighbours are saying "no" to shelters and housing. Here are a few examples of what is going on around the province this fall:

A victory for residents of Anita Place 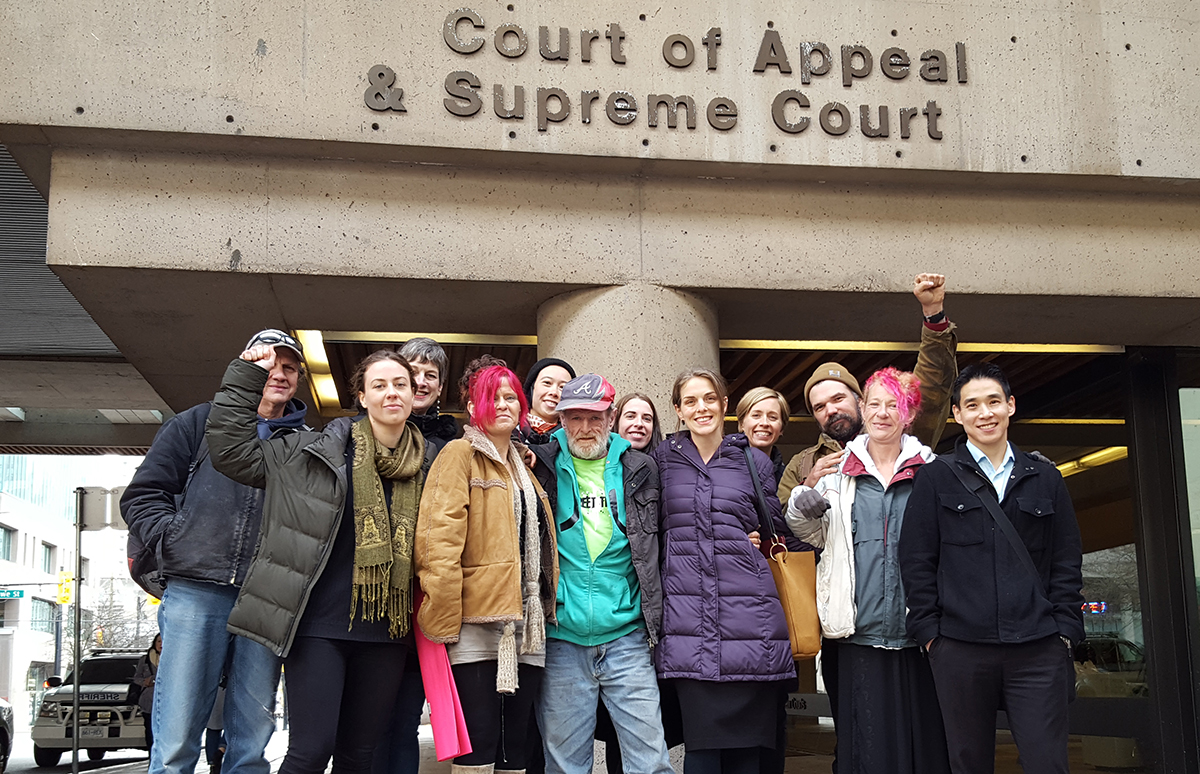 For several months, we have had the honour of standing alongside the residents of Anita Place tent city in Maple Ridge in their fight to protect the only space they can call “home”.

For the second time, the City of Maple Ridge has threatened the residents with eviction by way of injunction; and for the second time, we have worked closely alongside our clients to mount a robust legal defence armed with evidence of the site’s positive impact on people’s health, safety, and sense of community. Last month, yet again, the City reconsidered its approach and decided to adjourn its application. 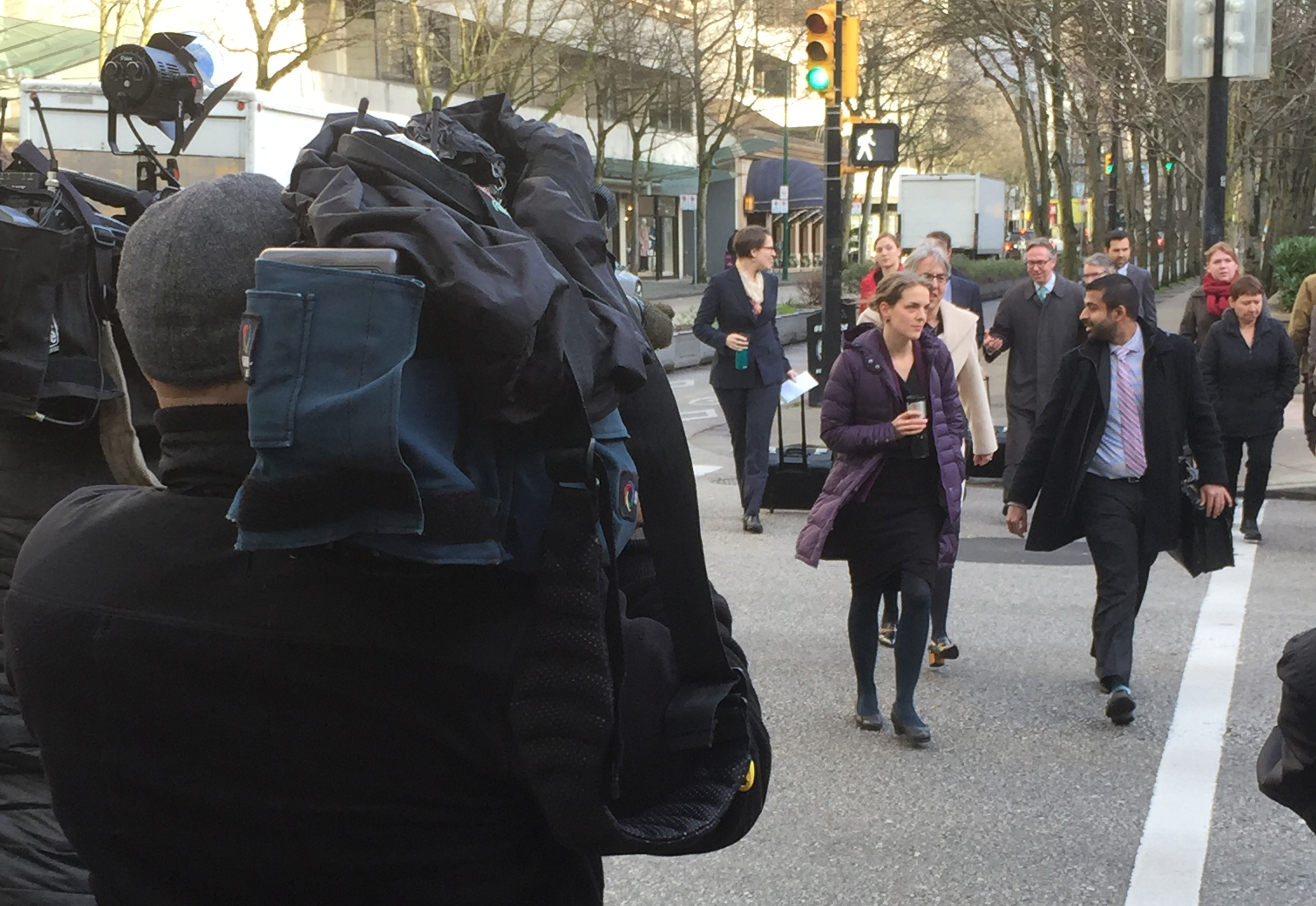 During the BC Supreme Court hearing, rather than going to court to argue for the right of Anita Place residents to exist in the encampment, we entered into a consent order with the City of Maple Ridge. This is meant to address some of the immediate life safety concerns at Anita Place and will provide desperately needed resources for residents who have been working hard to keep the camp safe for all. This includes fire-safe tents and tarps, as well as the installation of a modular washroom onsite.

BC’s provincial government has shown a strong commitment to human rights in announcing the re-establishment of the British Columbia Human Rights Commission. Pivot takes the position that the new Commission, in partnership with the Human Rights Tribunal, will be better equipped to fulfill the purposes of the Human Rights Code, RSBC 1996, c 210 (the “Code”), including fostering inclusion and understanding, preventing discrimination, and eliminating persistent patterns of inequality by amending the Code to prohibit discrimination and harassment based on Social Condition.

Municipalities across BC have authority to determine land use and zoning within their jurisdictions. Too often this authority is exercised in a discriminatory and stigmatizing way, which results in the denial of services to marginalized and vulnerable groups.

Bylaws, policies, and processes founded on discrimination play a role in perpetuating homelessness, risk of disease transmission (such as HIV and hepatitis C), overdose, and vulnerability to violence. They limit our collective ability to provide evidence-based health interventions for people with addictions in the midst of a public health emergency, and they result in the failure to provide shelter and housing services for people in need. 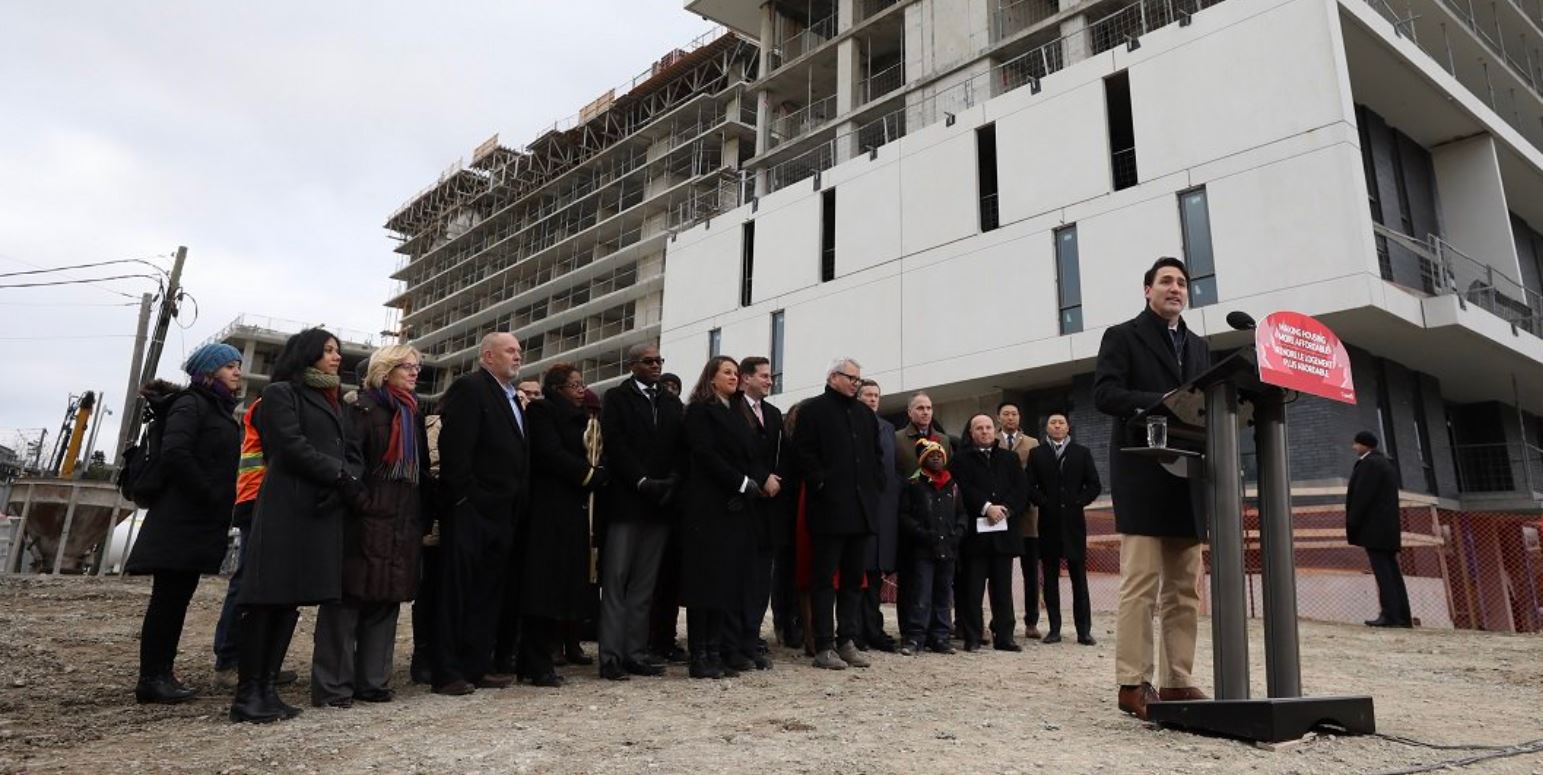 It was, ostensibly, a major announcement deserving of two simultaneous press conferences across Canada—in Toronto and Vancouver, where the housing crisis has crippled livability and quality of life for thousands struggling with (un)affordability. Alluding to transformative change, Prime Minister Justin Trudeau, in Toronto, and the Hon. Jean-Yves Duclos, Minister of Families, Children and Social Development, in Vancouver, unveiled Canada’s first-ever National Housing Strategy.

This was a hopeful opportunity to articulate and present a coordinated approach between all levels of government (municipal, provincial, federal) to address one of the most pressing issues in Canadian society today: homelessness and poverty. The ambitious plan parcels $40 billion in spending over 10 years with the goal of cutting chronic homelessness by 50%. 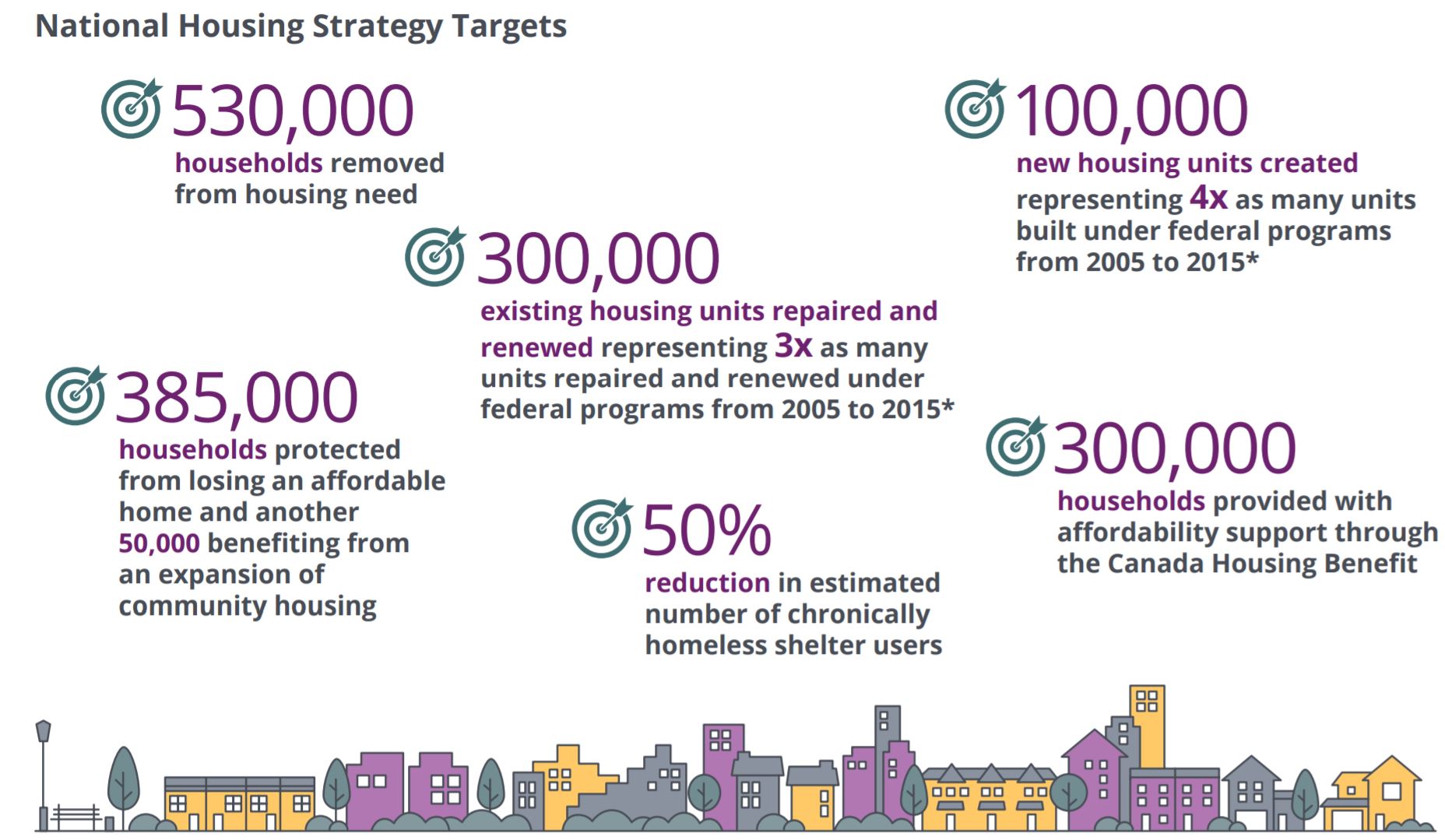 Though a step in the right direction, it falls short on a number of accounts; firstly, the timing: much of money will not beginning to flow until 2021 (after the next federal election). This ignores the cruel reality that people now, at this very moment, are suffering through a homelessness and housing crisis wherein thousands are living dangerously on the streets in the freezing cold without the basics of life. Many may not even survive to 2021 when government largess begins to fund shovels in the ground and mobilize services. 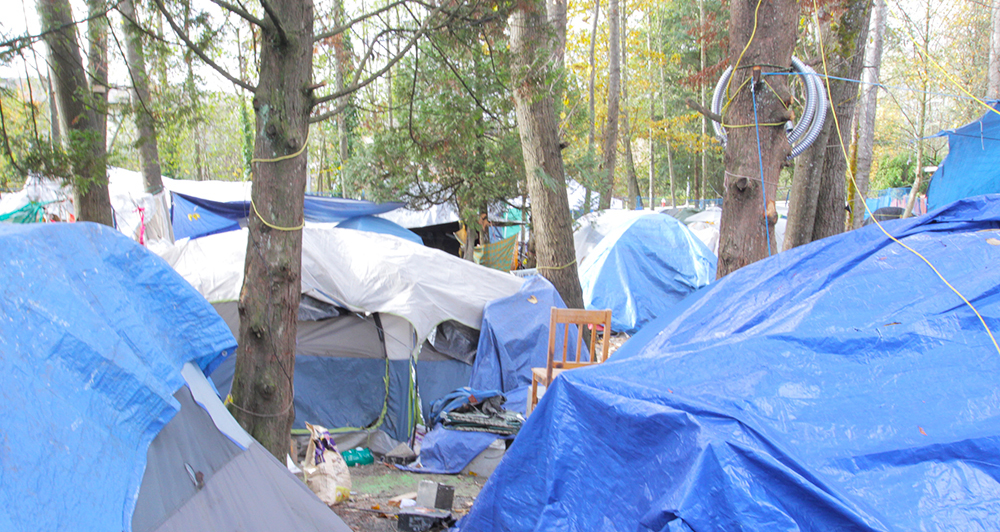 We are representing one group of homeless individuals, at Anita Place tent city, who cannot wait three years for support and housing as governments haggle over funding agreements and allocation, which is part of the rationale for delaying the money. But others, see something else in this timeline:

Now to the substance of the Plan.

“Launching in 2020, the Canada Housing Benefit will provide affordability support directly to families and individuals in housing need, including potentially those living in social housing, those on a social housing wait-list, or those housed in the private market but struggling to make ends meet,” read the official Plan document.

This is essentially a rent supplement—money the government provides to help people who are struggling to pay their rent. The government estimates it will deliver an average of $2,500 per year to each recipient household.

But this benefit is contingent on provinces signing on and agreeing to contribute to the funding that will go to help individuals in need. There is no guarantee of financial relief for struggling families; and yesterday, even Ontario’s Housing Minister, Peter Milczyn, was shy on a firm commitment from his province. Premier John Horgan has yet to comment publicly on whether British Columbia will chip in to the funding agreement.

There are strings attached to the federal help. (Joanne Lee-Young, Vancouver Sun)

We also have concerns that with less than one per cent vacancy in major cities like Vancouver and Victoria, this benefit could drive up rents in the lower end of the housing market, leaving thousands who don’t qualify with higher bills. Subsidies, in theory, are beneficial as they afford people a measure of choice in where they live; but absent adequate social housing, a benefit such as this could artificially inflate the lower-end rental market, which would run counter to the spirit of the policy.

The National Housing Strategy hopes to create 100,000 housing units through new initiatives like the National Housing Co-Investment Fund and the Canada Community Housing Initiative. This housing will be “sustainable, accessible, mixed-income, and mixed-use,” according to the federal government.

But this target may be too low. The Carnegie Community Action’s Project’s Our Homes Can’t Wait study reveals that British Columbia alone “needs a housing program that builds at least 10,000 units a year in order to meet the real need and end homelessness”.

— Anna was driven to law school by her desire to address inequality in a systemic way. Early experiences volunteering in the Downtown Eastside and with the Elizabeth Fry Society taught her about the gross inequalities in Canadian society and our continued criminalization of race and poverty.

She graduated from law school in 2013 and went on to practice in criminal defence and mental health law prior to joining Pivot in August of 2017. Anna is committed to using the law as a tool to protect and advance the dignity of all people. 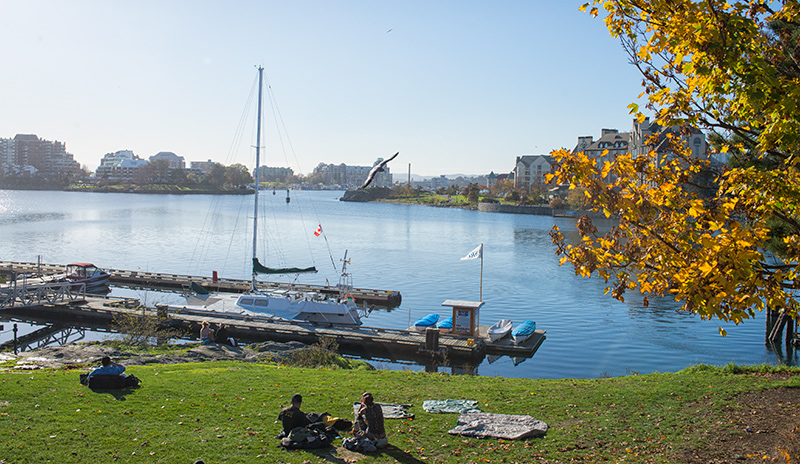 Apparently, grass and vegetation are more important than the dignity and safety of people who are homeless. That’s the conclusion one could reasonably draw from the absurd bylaw amendment proposed by the City of Victoria—one that would impose time limits on park visitors such that individuals who shelter in parks would be required to uproot and relocate their belongings multiple times each day. While the bylaw change may seem to apply equally to all, the reality is that its enforcement will target homeless people and discriminate against those struggling with poverty.

The proposed change would limit the length of time a person could remain in one location in a public park to six hours. Regulating public space in this manner will force people who are homeless to collect their belongings and relocate multiple times a day—an imposition that is especially difficult for those who carry all of their possessions on their back or in a shopping cart. Even worse off will be those struggling with physical disability and illness. Effectively forcing a vulnerable population into an ever-transient existence exacerbates the harms and challenges they already face braving the elements 24-hours a day.

Currently, people in need of shelter in Victoria can set up a tent in a park and rest overnight provided that they pack up their belongings by 7 a.m.

When people wake up in the morning, all we are asking is that they move at least a hundred metres from the spot that they have camped overnight to allow that piece of earth to kind of revive,” Mayor Lisa Helps told CBC News.

This is the same rationale underpinning so many ill-conceived bylaws that further displace, destabilize, and marginalize an already vulnerable population by forcing them to move every six hours. It assumes homeless people have a place to go and the ability to move there, and betrays a lack of understanding regarding the realities of life on the street.

A change in government after 16 years has presented a unique opportunity to call for significant, systemic reform to British Columbia's ailing justice system—changes that will benefit the most marginalized in society along with Indigenous communities. The recommendations below are categorized into ten main priority areas and have been hand-delivered to BC's Attorney General, David Eby. We look forward to working with government and our supporters to realize this vision for a better British Columbia.